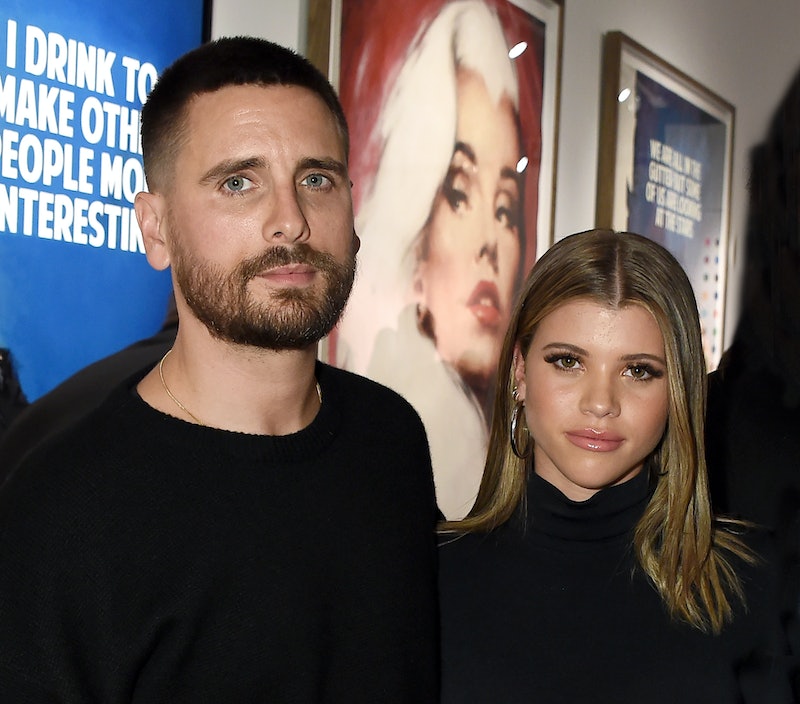 The Kardashian version of "Three's Company" continues to prove that there's nothing but good vibes between them. As Entertainment Tonight noted, Sofia Richie attended the Kardashian's ski trip alongside boyfriend Scott Disick and his ex Kourtney Kardashian. And not only is Richie getting along swimmingly with her boyfriend's ex, but she's also vibing with the entire Kardashian crew during the fun family outing.

According to ET, Kardashian, Richie, and Disick have been spotted out on a couple of outings during the family's Aspen, Colorado ski trip. The publication reported that on Dec. 28, the trio was seen shopping around the snowy destination. This ski trip outing, and their recent Mexican getaway, show that things are going super well between the three celebs, which is an especially positive thing for Kardashian and Disick's co-parenting relationship.

A source even told ET that they "get along great." They continued to say that, "It took some time for everyone to be comfortable around one another. Kourtney sees that Sofia is good for Scott, who has been in a really great place, and [she's] happy for the couple."

Additionally, Kardashian isn't the only member of the famous reality TV family that has accepted Richie into the fold. The rest of the KarJenners have welcomed her, as well. According to E! News, which highlighted yet another hangout between the trio that took place on Dec. 30, other members of the family, including Kim Kardashian, Kendall Jenner, Kris Jenner, and Kanye West, have been getting along well with Richie during their winter excursion. A source even told the publication, "Everyone has accepted Sofia at this point and she has been able to tag along and be a part of the family activities."

As you can see from the above screenshot, Richie has indeed been taking part in many of the fun Aspen activities with the rest of the Kardashians. On Kim's Instagram Story, she showcased Disick and his girlfriend as they tore it up on a mountain on skis and a snowboard, respectively. If she's being featured on the KKW Beauty mogul's Instagram Story in such a fun and positive light, you just know that Richie's getting along super well with the KarJenner fam.

Before their ski trip, Richie spent time with the Kardashians during another, festive occasion. On Christmas Eve, the model joined the family for their annual holiday party, where she posed in a gorgeous outfit amongst all of the stunning Christmas decorations.

All of these family activities followed the trio's aforementioned Mexican vacation in December. Richie, Disick, Kardashian, and the exes' three children, Mason, Penelope, and Reign, all traveled to Cabo San Lucas, Mexico, per Us Weekly, where they got some rest and relaxation.

On Instagram, Disick even acknowledged their outing by posting a photo of the three of them and jokingly wrote, "What more can a guy ask for. THREE’S COMPANY."

Whether Richie's attending the crew's ski trip, Christmas Eve bash, or going on a Mexican vacay, it seems like she's truly been accepted into the fold by Kardashian and the rest of Disick's famous fam.

More like this
Kourtney Kardashian Claps Back At Pregnancy Speculation On Instagram
By Jake Viswanath
Who Is Nick Cannon Dating & How Many Kids Does He Have?
By Jordyn Tilchen and Radhika Menon
Everything To Know About Taylor Swift’s 10th Studio Album, 'Midnights'
By Grace Wehniainen and Jake Viswanath
What Is Miles Teller’s Net Worth? The 'SNL' Host's Bank Account Is No Joke
By Meg Walters
Get Even More From Bustle — Sign Up For The Newsletter