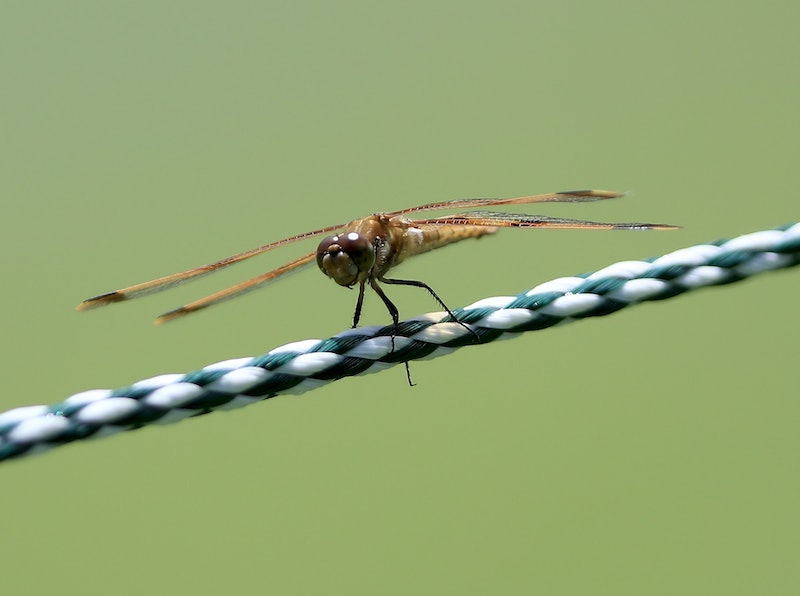 I never thought I'd start my day out by sympathizing with an insect, but here I am. According to research published earlier this week, female dragonflies fake their death to avoid male advances, dropping out of the sky and playing dead until the offending bro takes off. I ask you: Have you ever heard anything more relatable? There have been far too many times in my life when I, too, wished I could collapse to the ground while some dude wasn't looking and roll across the dirty bar floor to a place where he couldn't advise me to wear less makeup and ask for my number in the same breath. Somehow, I doubt I'm the only (human) woman to feel this way.

In a study published in Ecology, University of Zurich researcher Rassim Khelifa wrote about the female dragonfly's "extreme sexual conflict resolution." According to New Scientist, Khelifa noticed the behavior while collecting the larvae of the moorland hawker dragonfly in the Swiss Alps. While he was working, he witnessed a female dragonfly, pursued by a male, dive straight for the ground. She remained motionless until her unwanted beau flew away, after which she hopped right back up and went about her dragonfly business.

Khelifa, who has studied dragonflies for 10 years, told New Scientist he was "surprised" to see such extreme behavior, and like any good scientist, he decided to investigate. Of the 31 female moorland hawkers he went on to observe, 27 decided to plummet to their fake death rather than deal with male advances, and out of all the dive-bombs, 21 successfully tricked their suitors into leaving. According to an unaffiliated researcher, it's possible that this is typically used in areas where there are lots of dragonflies, so male harassment is more frequent. Yes, he described it as harassment — not even dragonflies are safe from dudes who just can't take a hint.

Khelifa only studied moorland hawkers, so there's no way to know yet whether other dragonflies exhibit the same behavior. However, it's possible the strategy developed because female moorland hawkers are exceptionally vulnerable to harassment. Not only do males fail to help guard the nest after mating, but it's also in a female's best interest to only copulate once — all the eggs can be fertilized at once, and a second time could harm the female's reproductive organs.

No wonder they've resorted to crash-landing to tricking suitors.

Faking death is fairly common in the animal kingdom; the phrase "playing possum," for example, refers to the possum's tendency to do exactly that. Usually, it's reserved for avoiding predators rather than sexual advances, but Khelid told Gizmodo that it's been observed in a few other animals, including two species of robberflies. That being said, females from other species aren't incapable of defending themselves; several nonhuman primates, for example, are known to form female alliances against unwanted males.

In the meantime, perhaps the male citizens of the animal kingdom could do with a reminder that some species, such as the black widow and praying mantis, have a nasty tendency their mates after (or sometimes in the middle of) copulation. A girl's gotta eat.

I'm not saying human ladies should take a page out of their cannibalistic book, but the female moorland hawkers might be on to something. Next time some bro won't leave me alone, maybe I'll fake my own death, too, and escape to a remote Pacific island.