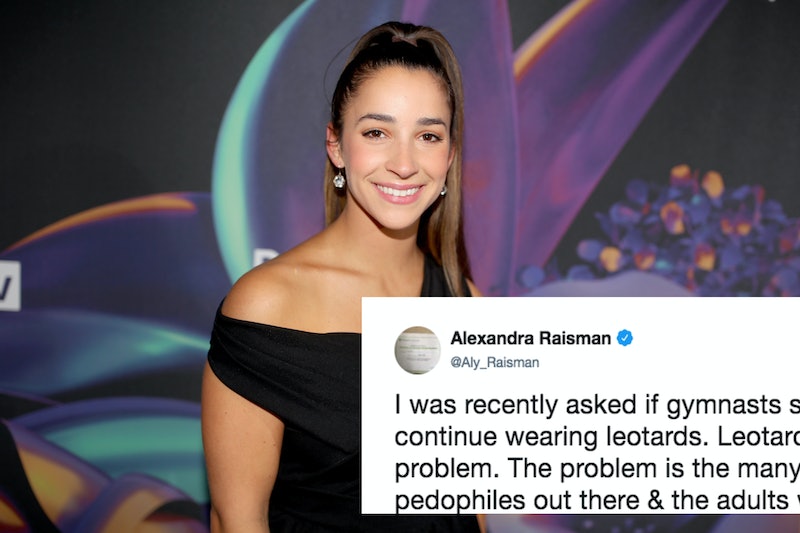 When it comes to conversations surrounding sexual assault, people are always looking for different ways to point a finger. One of those directions, unfortunately and unfairly, is often at clothing. As Teen Vogue found, someone asked Aly Raisman if leotards encourage sexual assault — and she had the best possible Twitter response. Listen up, because this message should be heard by all.

Since January 2017, more than 130 women and one man have come forward to accuse Larry Nassar, the former Team USA gymnastics doctor, of sexual assault. Raisman was one of the many that publicly testified against Nassar, and her statement was powerful to say the least.

Since then, the conversation has not stopped. Raisman has been an advocate for survivors and sexual assault prevention. Unfortunately, that can involve fielding offensive questions.

"I was recently asked is gymnasts should continue wearing leotards," Raisman's tweet from reads. "Leotards r not the problem. The problem is the man pedophiles out there & the adults who enable them. By saying clothing is part of the issue, u are victim shaming/implying survivors should feel it's their fault."

I'll just set that right there, because Raisman says it best. Victim shaming is often a part (read: a very wrong part) of the conversation on sexual assault, but Raisman is hoping to end that.

This isn't the first time that Raisman has spoken out on the topic of victim shaming. In fact, she made the statement loud and clear without saying anything at all. She posed nude for Sports Illustrated in February 2018 with the phrase, "Women Do Not Have To Dress Modest To Be Respected" written on her body.

"I hope that we can one day get to a point where everyone realizes that women do not have to be modest to be respected," Raisman told SI Swim. "We are free to draw confidence and happiness in our own way, and it is never for someone else to choose for us or to even judge us for that matter."

The advocacy doesn't stop there, either. The athlete created a one-piece swimsuit with the word "Survivor" on it as a part of the #AerieREAL collaboration. In an interview with Bustle, she talked about how clothing has nothing to do with the conversation.

"I don't want people to be ashamed of something that happened. If someone hurt you, it is NEVER your fault," Raisman tells Bustle. "Abuse is never ever ok. Victim shaming must stop. We all must support each other."

Raisman isn't alone in spreading the word about sexual assault and victim shaming. After the Olympian posted her tweet, her fans had equally as great responses to her comment. Because if there's anything better than advocacy is when people take the response and amplify it even more.

Raisman, if you're reading this, say it one more time for all the haters in the back.

People will always be looking to find someone to blame, but the victim should never be one of them.

The hashtag really does say it all. Not to mention this reply gives a pretty hilarious visual.

People aren't just mad, they are enraged. As they should be.

And it needs to stop.

Got a problem with this argument? Bring it on — pun intended.

While some of the response are humorous, the conversation isn't. And Raisman is doing her part to put a stop to it.