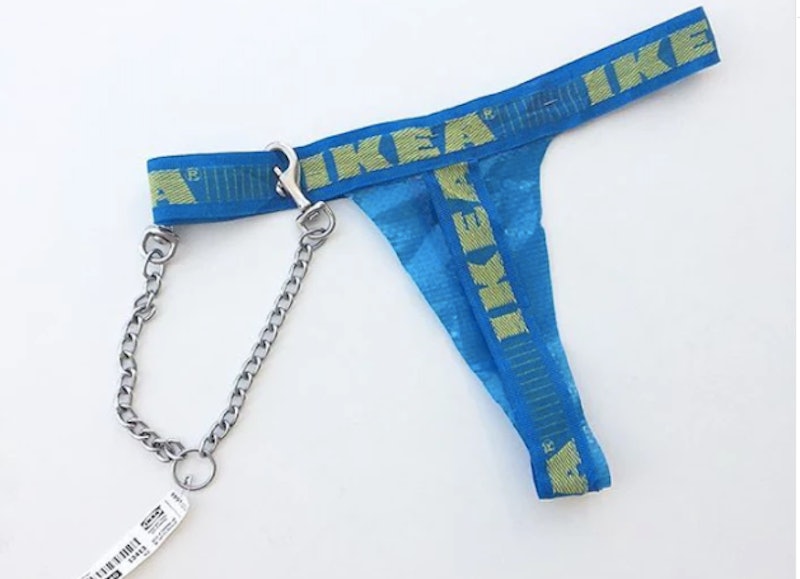 Growing up, my family used our giant IKEA tote as a beach bag, and I’ll admit — it was rather genius. These bags are among IKEA’s "most iconic products," the brand told the Huffington Post UK, but it wasn’t until Balenciaga essentially recreated the style (and charged a large amount of money for it) that they started getting attention online recently. And now, the viral sensation has been taken to the next level. Someone turned the IKEA Frakta bag into a thong because, I mean, why not?

You have Signe Ralkov to thank for bringing this practical use of the IKEA bag to life. The post is captioned “Balenciaga X IKEA limited edition hoax,” so this seems to be more of a gag creation than something that’s intended to actually be worn, but hey, for all intents and purposes it most absolutely could be functional — if you wanted it to be. And here I was thinking taking the IKEA bag to the beach was brilliant. Boy, was I mistaken.

Ralkov tells Bustle via email that Balenciaga inspired her to create her own interpretation of an IKEA bag as a luxury accessory. “I was [of course] inspired by Balenciaga's invention of the Frakta bag as some sort of luxury accessory. I took the feelings about this and put it in my thong,” Ralkov writes.

So, there you have it, folks. The IKEA thong.

This design work definitely didn't go unnoticed by the furniture brand, either. According to Huffington Post UK, the company had this to say about seeing these "couture" designs appear online: "We are extremely flattered to seemingly be an inspiration for the latest catwalk designs. Our IKEA FRAKTA tote is one of our most iconic products which are already owned and loved by millions,” Stella Monteiro, Sales Leader for UK and Ireland told the publication.

The version the high-end fashion house created will cost you over $1,000 to own.

But, you can throw everything you own in an IKEA version for just .99. That's quite the steal.

The company had a pretty epic response to Balenciaga's expensive design, and fans of the affordable furniture brand definitely found it amusing, for good reason.

Some folks online thing the obsession has gone a little too far, but I belive it's gone just far enough.

Other people are into this new trend.

Because really, it's pretty cool that the viral sensation that came from the Balenciaga bag could have generated creativity like this, don't you think?

Love it or hate it, the IKEA Frakta's taken on a life of its own. No longer is it just the big blue bag you carry around while shopping at IKEA (or to the beach). Oh no, now it's an Internet sensation, a thong and so much more.