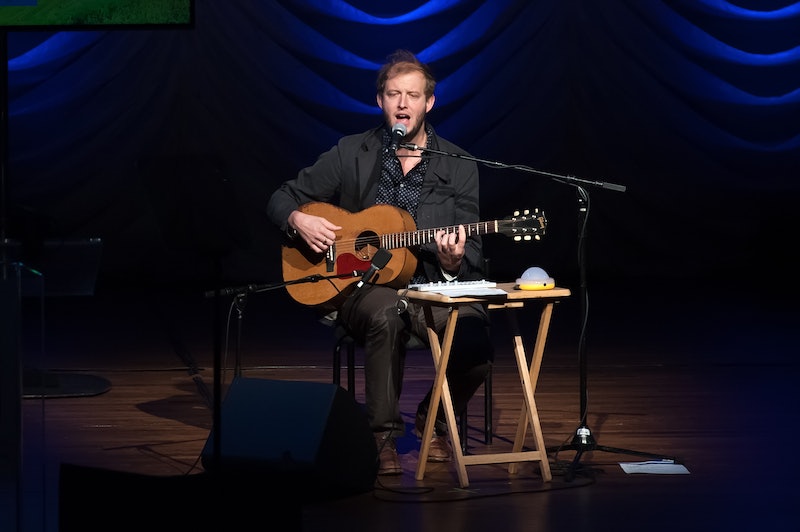 Have you ever wondered what the insights of radio show host Alex Jones would sound like as a Bon Iver song? The answer to that is probably no, because why would you? Nevertheless, the good folks at Super Deluxe have taken some of Jones' choicest quotes and turned them into a song, sung in the style of the popular folk band. And you might not be able to tell the difference, except for the fact that Bon Iver generally doesn't sing about goblins, Somali immigrants, or Hillary Clinton.

"I'm angry, I've had enough of these people," Jones says in one of the rants-turned-lyrics. "They're a bunch of Christian, murderous scum that run giant death factories, keeping babies alive and selling their body parts."

When typed out, those don't look like terribly good lyrics to a folk song, or any song. And yet when they're sung in a pleasant falsetto against a light strumming acoustic guitar, you might not even notice that there's anything odd about them (Well, up until the "selling their body parts" bit, perhaps).

The mashup — maybe it's more accurate to call it a cover — was performed by Nick Lutsko and published by the comedy site Super Deluxe. Here it is, in all of its glory.

A longer version of the song is available on YouTube channel.

Jones is an Austin-based shock jock known for his unconventional views on politics. He's been doing this for over two decades, but his profile has skyrocketed significantly lately, largely due to his vociferous support for Donald Trump. He played a major role spreading debunked conspiracy theories during the 2016 presidential campaign, and was recently interviewed by Megyn Kelly.

As a result of his newfound fame, he's become something of a meme. Several of Jones' more interesting diatribes, such as his warnings about the federal government "putting chemicals in the water that turn the freakin' frogs gay," have gone viral in their pure, unadulterated state. Others, like the depiction of Jones as a character in a mid-'90s video game cut scene, have been modified for comedic effect.

The Bon Iver tribute takes things to the next level, because it's actually an original performance — music by Lutsko, "lyrics" by Jones. The music is catchy, and the songwriting solid enough that the tune stands on its own. Why exactly Jones' tirades about big government sound so fitting in a folk song form remains a mystery, however.

More like this
Girls Aloud Announce Primark Collab In Honour Of Sarah Harding
By Sophie McEvoy
Everything To Know About Taylor Swift’s 10th Studio Album, 'Midnights'
By Grace Wehniainen and Jake Viswanath
Tove Lo Is Still Crying On The Dance Floor
By Ivana Rihter
Everything You Need To Know About ‘Black Panther: Wakanda Forever’
By Bustle Editors
Get Even More From Bustle — Sign Up For The Newsletter