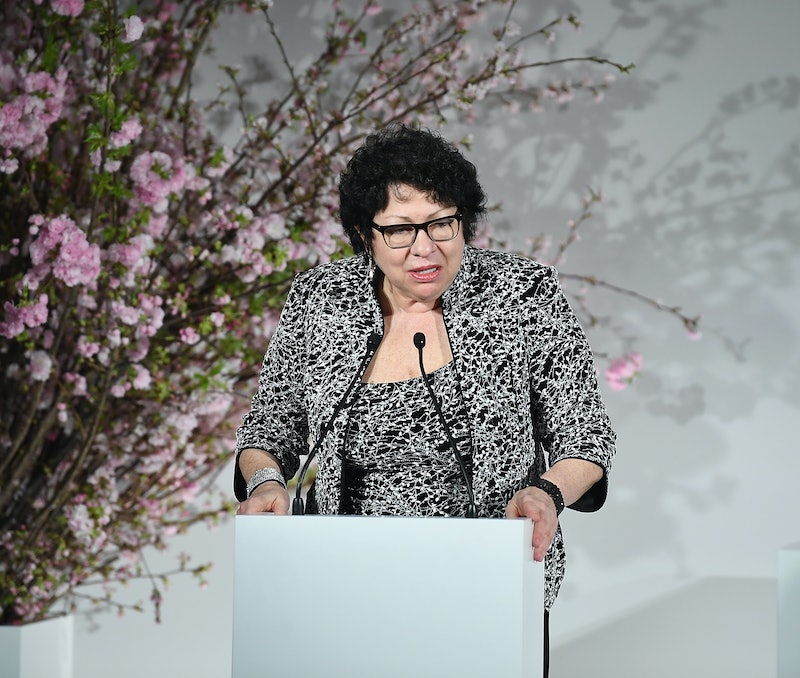 In an interview with CNN on Saturday, Supreme Court Justice Sonia Sotomayor addressed Justice Brett Kavanaugh's confirmation, which sparked protests across the country over how alleged sexual assault survivors are treated in the United States. "When you're charged with working together for most of the remainder of your life, you have to create a relationship," Sotomayor said.

Supreme Court justices are appointed for life — which means Kavanaugh will be her coworker for many, many years. (Justices are allowed to step down as Anthony Kennedy did; death isn't a job requirement. Kennedy's decision is what put Kavanaugh's confirmation in motion.)

"The nine of us are now a family and we're a family with each of us our own burdens and our own obligations to others, but this is our work family, and it's just as important as our personal family," Sotomayor told CNN. "We've probably spent more time with each other than most justices spend, who have spouses, with their spouses."

Sotomayor said she used a story from Associate Justice Clarence Thomas when first meeting Kavanaugh. Thomas had his own contentious confirmation process, to put it mildly.

"It was Justice Thomas who tells me that when he first came to the Court, another justice approached him and said, 'I judge you by what you do here. Welcome.' And I repeated that story to Justice Kavanaugh when I first greeted him here," Sotomayor said of Kavanaugh's first days on the bench.

Kavanaugh was confirmed to the Supreme Court in October on a 50-48 vote.

Sotomayor — who was confirmed to the Supreme Court in August 2009 on a 68-31 vote — said the Court is settling into having two new members. Neil Gorsuch was confirmed to the Supreme Court in April 2017, mostly along party lines. "Conservative, liberal, those are political terms," she told CNN. "Do I suspect that I might be dissenting a bit more? Possibly, but I still have two relatively new colleagues, one very new colleague, Brett Kavanaugh and Neil Gorsuch."

Sotomayor said the law allows for opportunities to both agree and disagree with her colleagues. "And we've agreed in quite a few cases, we've disagreed in a bunch. But you know, let's see," she told CNN.

In the interview, Sotomayor said the current political landscape obscures how similar we are to one another. "We all have families we love, we all care about others, we care about our country, and we care when people are injured, and unfortunately, the current conversation often forgets that," she said. "It forgets our commonalities and focuses on superficial differences whether those are language or how people look or the same God they pray to but in different ways."

"What is important is those human values we share and those human feelings that we share. But I worry that we forget about that too often," she told CNN.

Sotomayor has made similar pleas for understanding and community involvement, most recently at Harvard Law School on Tuesday.

"Laws are made by men and women, and men and women can change them when the laws are wrong. I can't do this as a judge, but I spend most of my public time speaking to young people because I believe they are the ones I have to motivate to go out there to change the laws they don't like," Sotomayor told students gathered at Harvard. "We're here to make a more perfect union, and the only way we can do this is by engaging."