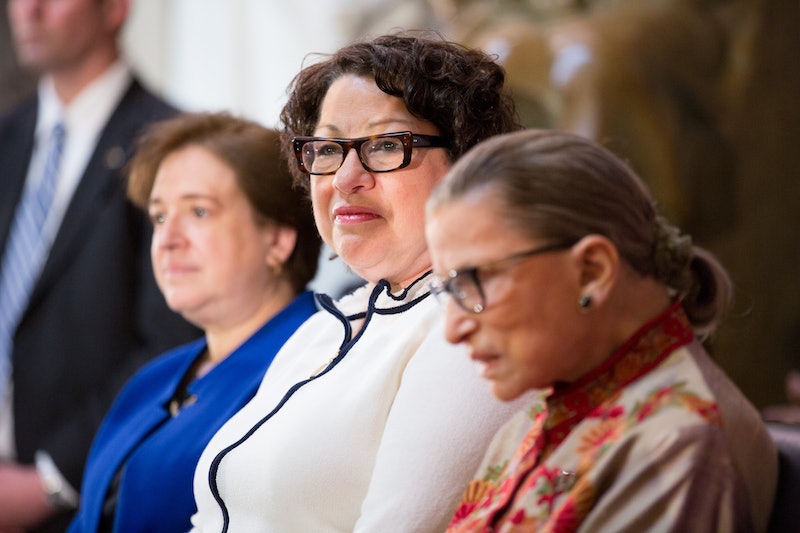 In response to an especially somber topic, Supreme Court Justice Sonia Sotomayor's dissent on electric chair executions in Tennessee contained a moving argument against both of the state's legalized methods of carrying out the death penalty. Edmund Zagorski was executed on Thursday, after the U.S. Supreme Court denied a request he made for them to take up the claim that it was unconstitutional for him to have to choose between the chair and lethal injection.

Sotomayor seemed to agree. In her dissent, she wrote,

Zagorski [chose] the electric chair not because he thought it was a humane way to die, but because he thought that the three-drug cocktail that Tennessee had planned to use was even worse. Given what most people think of the electric chair, it is hard to imagine a more striking testament—from a man with more at stake—to the legitimate fears raised by the lethal-injection drugs that Tennessee uses.

Sotomayor then pointed to evidence that the injection used in Tennessee can often make prisoners feel as if they are "drowning, suffocating, and being burned alive from the inside out" during a process that can take as long as 18 minutes — and there's "mounting evidence" that the sedatives used in the procedure might not fully work.

Sotomayor concluded by saying, "Because I continue to believe that we should rethink this troubling doctrinal shift and reaffirm that 'the Cruel and Unusual Punishments Clause prohibits the imposition of inherently barbaric punishments under all circumstances ... I dissent."

Zagorski's death marks the first time in five years an inmate has died by electric chair, according to CNN. Before his execution, Tennessee had only used the electric chair one other time since 1960, in 2007.

Zagorski was found guilty of murder during his 1984 trial, according to The Tennessean. At the time, 28-year-old Zagorski reportedly told his defense team that he wanted the death penalty, and he forbid them from contacting his family. However, once he was on death row, he apparently changed his mind. He got a new legal team, and proceeded to make 22 appeals over 34 years, fighting up until the last hours of his life for the court to save his life.

The debate over the death penalty has been raging for decades, with various states coming down on different sides of the argument. As of 2018, nine states have the electric chair as an alternative to lethal injection.

Sotomayor has been on the Supreme Court since 2009, and is a notorious optimist. During a visit to Nashville to talk about her new children's book, Turning Pages, Sotomayer said that getting diabetes as a child impacted her outlook on life. She said, "[I've] learned it is a gift — life — and that every minute that you live you should squeeze as much out of it as you can. I thought: 'I have to get out there and try to change the world before I die.'"

Her love for life and respect for law was evident in her dissent on the Zagorski execution. Sotomayor wrote, "The longer we stand silent amid growing evidence of inhumanity in execution methods like Tennessee’s, the longer we extend our own complicity in state-sponsored brutality."