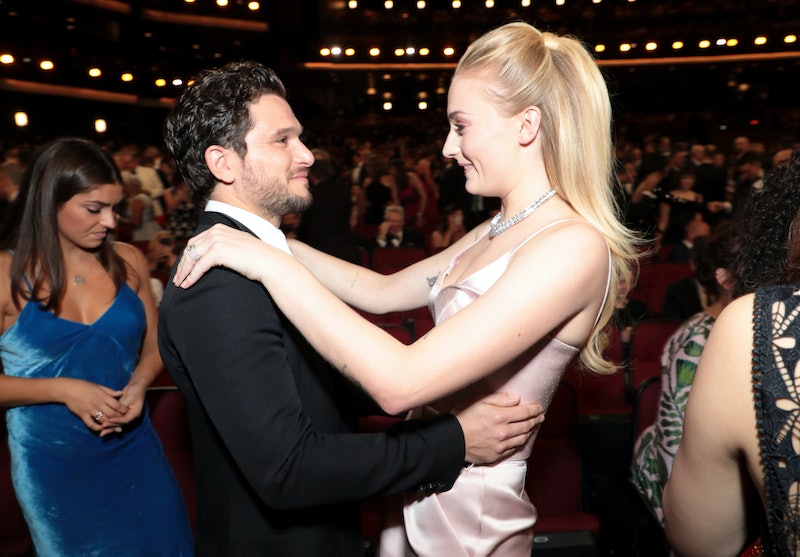 After working together for over eight years, the cast of Game of Thrones formed lasting bonds to last a lifetime. After sharing emotional goodbyes last year after filming for season eight ended, the actors have been able to hang out and reminisce throughout 2019 thanks to countless press junkets and awards ceremonies, including last night's Emmy Awards. And if there's one meet up that will totally melt your heart, it's Sophie Turner and Kit Harington's Emmy reunion.

As HuffPost reports, the moment was captured by Hollywood Reporter columnist Scott Feinberg who posted a short clip of the reunion on Twitter. In the video, the on-screen siblings/cousins/whatever can be seen having an emosh moment followed by a hug, with Turner grabbing Harington's face in both hands and telling him how handsome he looked.

Fans of the GoT pair couldn't get enough of this moment on Twitter, with person dubbing them the "King and Queen of Reunion Hugs" and another saying they deserved an Emmy for the hug along. One tweeter even went so far as to say that their hug gave them "more emotion than the season finale of Game of Thrones." I'm so glad I wasn't the only one who was thinking it.

Both nominated for Best Actor & Supporting Actress in a Drama Series, the duo were equally as excited to be there for the rest of their GoT fam, and were up on stage celebrating the show's big win for Outstanding Drama Series.

Speaking of which, if the embrace seems a little familiar, you're not the only one. Fans have also compared it to their Jon and Sansa's reunion in season six, which was equally as touching as the Emmys.

For those familiar with the two actors friendship, this loving reunion won't come as a surprise. Having worked together since the very beginnings of the show in 2011, it's no wonder that they're as close as IRL siblings. They also have a penchant for winding each other up, as evidenced by Turner's belief that Harington wouldn't be returning to the series after Jon's death.

"Kit told me in the fifth series he was going, and I wrote a really long letter about how much I was going to miss him and how much I like working with him," she told This Morning hosts Phillip Schofield and Holly Willoughby. "And then he comes back next season and said, 'I've still got your letter, it's so funny!' And he shows it to people, just to take the mickey!"

Harington mentioned in an interview with PEOPLE Now that he hopes to "still be in touch with the cast in ten years, and hopes everyone from the cast is still working," including Turner who he wants to work with again. Although, "he admits that there is some concern that people might only see Jon and Sansa on screen."

The actor also mentioned how he'd love to work with his wife, Rose Leslie, "but says that since they're married and played lovers already, he questions whether they'd ever get to do that again."

Regardless, it's clear that this group of actors have officially bonded for life, and I can't wait for more reunion's like this in the future.