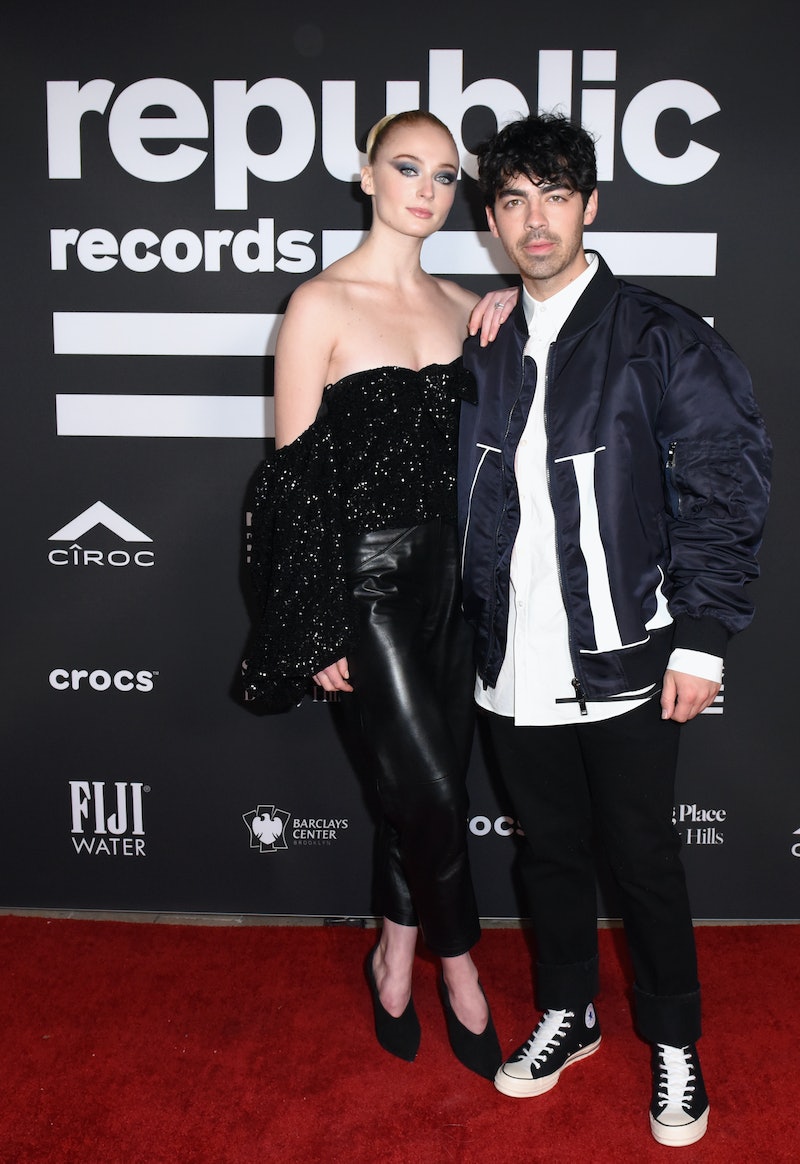 Surprise! What happens in Vegas didn't stay there — thanks to the wonders of social media. Sophie Turner wore a jumpsuit with a veil when marrying Joe Jonas in a surprise Las Vegas ceremony after the 2019 Billboard Music Awards on May 1. Turner, who is currently starring as Sansa Stark on the final season of Game of Thrones, wore what appeared to be an ivory-colored, silk jumpsuit with a cami top and a killer veil for an overall look that was modern, traditional, and totally gorgeous at once. The groom wore a gray suit with a boutonniere on the lapel and cut an incredibly handsome figure. Turner and Jonas make a beautiful couple when appearing on red carpets — and at their impromptu wedding.

It also appeared that the duo used Ring Pop lollipops to commemorate their commitment. How adorable, right? It was also a fitting gesture, since the reunited Jo Bros. performed their new song "Sucker" at the BMAs earlier in the evening.

While no official pictures have been shared with the media or through the couple's individual Instagram accounts, DJ and producer Diplo did document the entire shebang, including the actual exchange of the vows, on his Instagram story and via a live Instagram video.

The Game of Thrones star and the Jonas Brothers/DNCE singer wed in a chapel and the ceremony was officiated by an Elvis impersonator — because of course it was.

PEOPLE reports that the couple got hitched at Chapel L'Amour inside A Little White Wedding Chapel and that the ceremony was indeed legal and legitimate, since the pair filed paperwork for a marriage license earlier in the day.

Diplo captured some shots of Turner and Jonas before they entered the chapel. He inadvertently provided a look at Turner's wedding attire from the back. You can also see that she wore her golden locks down and framing her face before completing her look with a veil.

Ultimately, fans enjoyed unfettered access to the proceedings courtesy of a guest. It's as though viewers were virtual attendees of the celebrity wedding, which obviously doesn't happen on the daily.

From this vantage point, you can see Turner's layered veil.

The Diplo-hosted, unofficial livestream captured every essential moment of the Turner x Jonas nuptials. From the campy faux Elvis to the candy rings, this felt like one super fun ceremony.

Here's a closer look, where you can see that Turner is wearing a cami top with flowing bottoms. Her wedding look had such balance. While it's not clear if it was a one-piece or two separates, the ensemble was fabulous.

If you look really closely, you can see the red Ring Pop jewelry on Turner's hand.

After all was said and done, the newlyweds and their guests danced while the wannabe Elvis sang. You can see Turner's wedding outfit much better from this perspective. She was a stunning bride — as if anything else was possible.

As of press time, the couple has yet to publicly comment on their wedding. Congrats to Turner and Jonas for hosting a super fun shindig amid the BMAs and all the Game Of Thrones hype that is dominating pop culture. Here's to a lifetime of happiness.