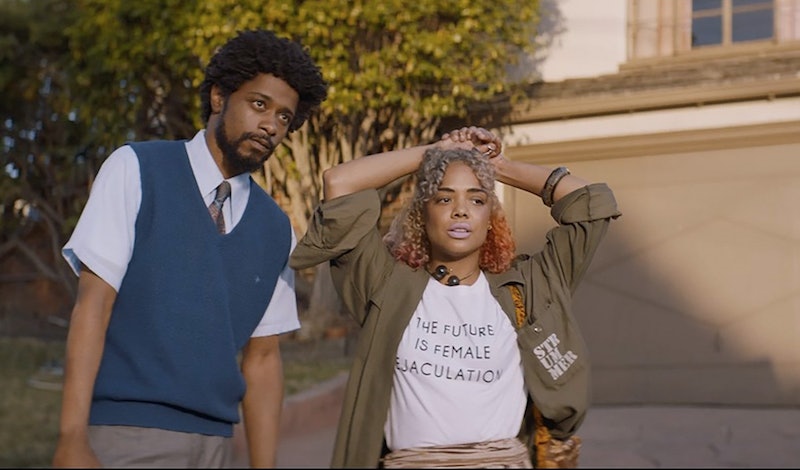 Major spoilers ahead. For Cassius "Cash" Green (Lakeith Stanfield), the protagonist of the new dystopian comedy Sorry to Bother You, workdays are all the same: vicious and demoralizing. A down-on-his-luck Oakland native who dreams of moving out of his uncle's garage and living with his artsy, activist girlfriend Detroit (Tessa Thompson), Cash faces barriers to success like his lack of experience, few personal achievements, and a depressed economy. There's also the fact that Cash is black. While the film is at first coy about correlating his socioeconomic struggles with his race, what is is explicit about is that, in increasingly sinister ways, Cash must sacrifice significant markers of his identity if he ever hopes to succeed.

First, he must forgo his personal dreams by taking the only job offered to him: Regalview Telemarketers. The company's bureaucratic incompetence, obsolete technology, and empty declarations of “synergy” and "family" weigh Cash down almost as quickly as the all-consuming and unfulfilling nature of the actual work. Yet the only other game in town is WorryFree, a factory where workers sign lifetime, multi-generational contracts to secure their employment — but at least get guaranteed housing and a meal a day in return (the slave vs. freedman metaphor is very much on the nose).

All is not lost for Cash, however. Regalview has a very specific pathway of promotion: make enough cold calls and become a "Power Caller," an executive position not just characterized by a gaudy golden elevator entrance, but also by fancier clothing, a nicer car, a new downtown apartment, and a higher social status in the corporate ladder. It's everything that Cash has longed for, and access to it is apparently so simple. All he has to do is employ his "white voice" to trick his customers into buying what he's selling.

To white viewers of Sorry to Bother You, it might seem outlandish that a person of color might need to use a different voice in order to find professional success. Yet unfortunately, that's reality for many people. Cash's "white voice" (done by David Cross) is just an exaggerated form of code-switching, defined by The Economist as the "hop-scotching between different cultural and linguistic spaces and different parts of [one's] identities." It a common inter-communal action in our society, particularly in our corporate lives, and at its core, it's simply a way to help the speaker and the spoken to better relate to one another through common phrases, cultural references, and verbal tones.

But code-switching only scratches the surface when it comes to race relations. Centuries of explicit racism and the propagation of white supremacy in the United States has created a world in which white people deem black and brown people as threatening and less trustworthy than other white people — even subconsciously. In fact, implicit preference for one's own race can be identified as early as three months old, according to a study by the National Institute of Health.

When these subconscious biases go unchecked in groups with social power over others, the result is a continued preference for one's own race in every aspect of life — especially in the workplace. American capitalism has been crafted to reflect, embody, and perpetuate the dominant structures of our society and, as history tells us, there is nothing more dominant in our society than the oppression of marginalized communities to uphold white socioeconomic privileges. This is one of the main reasons why wealth in the U.S. remains so disproportionately distributed, why white people hold the most leadership positions across industries, and why these executives often prefer hiring and promoting other white people due to these aforementioned racial biases.

Compared to white workers' 2.7 percent unemployment rate, black unemployment remains at a high 6.6 percent, according to Bloomberg. Among the employed within both groups, black households only hold one-tenth of the wealth of white households, and when black workers try to improve their economic situation through better jobs, they're blocked from accessing them thanks to the self-perpetuating corporate cycle. This is the environment shown in Sorry to Bother You, where black workers such as Cash and Detroit, as well as Cash's Regalview colleague Squeeze (Steven Yeun), are forced to contend with that unfair structure in order to survive. Yet while Squeeze and Detroit protest and try to unionize to better the long-term working conditions of their community, Cash code-switches to immediately improve his own situation.

This decision may make his white clients and white managers more comfortable around him, but it's a painful example of the absurd, arbitrary, and oppressive aesthetics of whiteness. That's shown in how "Power Callers" must maintain their "white voices" at all times, even when holding private conversations with black colleagues, and in the real world, in how black workers face scrutiny due to their unique names and natural hairstyles. Any explicit expression of blackness outside the uncontrollable pigment of one's skin can be a punishable offense in the workplace, while alignment to white ways of being is rewarded.

Yet to conform to these mandates is to transform oneself, every day, into an entity fundamentally antagonistic to one's own identity. It is an unnatural metamorphosis, a devolution of the self into the grotesque. In Sorry to Bother You, Cash gains all the riches he desires through his promotion, but he loses his soul in the process and becomes a totally different being — one of Regalview's tokens, a human mule forced to do the heavy labor of his own oppression to survive.

Sorry To Bother You is not solely a satire of corporate culture, but a scathing critique of the workforce's inherently exploitative nature. We may be far removed from the days of explicit, legalized discrimination on the job, but there is still a continuously mutating specter of malevolence against marginalized workers that's stayed silent — until now. Sorry To Bother You has no qualms about speaking the truth, even when it's uncomfortable; in fact, the movie revels in the discomfort it makes its viewers feel.

But the film's greatest strength, particularly for its audiences of color, is that it does not punish you with its painful reveals. It encourages you to learn the truth about people of color's working lives and find it funny — it is a little bleak, after all. In the present moment, the least we can do is come together as a community and laugh, rather than suffer these numerous systemic injustices alone.

More like this
What Is Barack Obama’s Net Worth? He Makes *Way* More Now As An Ex-President
By Hugh McIntyre
Laura Dern Said “Cultural Awareness” Made Her Rethink This 'Jurassic Park' Fact
By Grace Wehniainen
The 'Hocus Pocus' Sequel Finally Has A Release Date & It Makes Total Sense
By Shannon Barbour and Radhika Menon
What Does Doctor Strange’s Third Eye Mean?
By Arya Roshanian
Get Even More From Bustle — Sign Up For The Newsletter