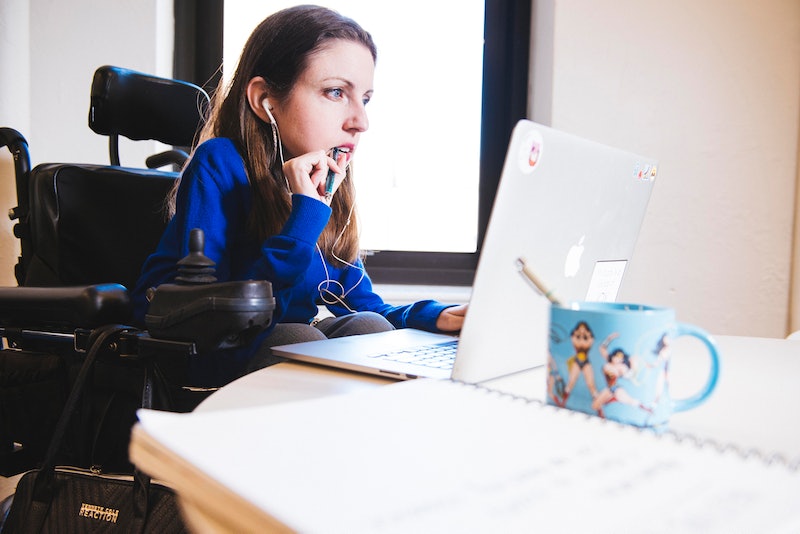 These days, it seems harder than ever to get paid fairly or obtain that promotion you deserve when nearly half of American men don’t believe the pay gap is real, according to TIME. How do you fight for solutions to a problem that some people don’t even believe exists? It’s no wonder some women struggle to speak up for themselves in the workplace. In a recent Bustle Trends Group online focus group, three women shared candid stories about situations in which they had trouble speaking up at work, revealing just how common an experience this is for many women in the workplace.

Even if you’ve landed that big promotion, advocating for the pay that comes with it can be hard. One participant said, “I had been working as a supervisor for about four months, and my new manager was going through the payroll and noticed that since I had been promoted, my salary had not changed. I had forgotten to follow up with my past manager about filing paperwork that proved my promotion and would give me the pay raise, and so I had been working at the entry-level salary for four months longer than I should have been. I got paid the rest of what I was owed thanks to my new manager."

Another participant had a similar experience with salary, telling the Bustle Trends Group, "At my previous job, I worked in a high-level office as an administrative assistant. I really enjoyed my position and the people I worked with. I worked alongside the administrative manager, who in time moved to another company. When she left, they decided to not hire anyone else and gave me all of her responsibilities in addition to the ones I already had. I accepted the challenge, thinking this would lead to a promotion. I worked extremely hard for a year and received praise from my supervisor and coworkers regularly and received a glowing annual review. To my surprise, there was no mention of a promotion or a raise, despite the fact that I was doing the jobs of two people for a lower salary."

These women aren’t alone in their experiences. Men are four times more likely to ask for a raise than women, and when women do ask for a raise, they usually ask for about 30 percent less than men do, according to the World Economic Forum. But even when women do try to advocate for themselves, it doesn’t always work in their favor. According to the International Forum of Cell Biology, people might think women need to just act more assertive in the workplace to close the pay gap, but there’s research that shows when women act outside of gender stereotypes by advocating for themselves, they’re seen as “more self-promoting, even aggrandizing, than the same argument made by a man.” In other words, they're seen as unlikable.

But advocating for yourself in the workplace doesn’t always involve pay or promotions. Sometimes it has to do with the way your coworkers or bosses are treating you. A third participant said, “There was a time when we were without a boss in our office. Things still needed to get done, there were deadlines, and we all knew what we had to do, but someone I worked with suddenly thought of herself as my boss, telling me what to do, what not to do, going in and reversing some of my work. She would run down the hall as the damsel in distress and fake-cry to someone in a different department, then act like a raging b*tch to my face. I let this go on for about two months, which I still kick myself for not shutting it down sooner.”

Around 60 percent of U.S. workers have been affected by workplace bullying, according to the 2017 U.S. Workplace Bullying Survey, Forbes reports. Unfortunately, women are overwhelmingly the perpetrators of workplace bullying, says Forbes, and they usually target other women. People who have been bullied in the workplace report that it has negatively impacted their work performance and that is has negatively affected their physical and mental health, says Forbes. Many have even left their jobs because of it, according to Forbes.

Advocating for yourself at work is never easy, and these women definitely aren’t the only ones who have struggled to speak up for themselves when something wasn’t right. These are just three stories out of the countless ones out there of women who are existing and surviving against all odds.