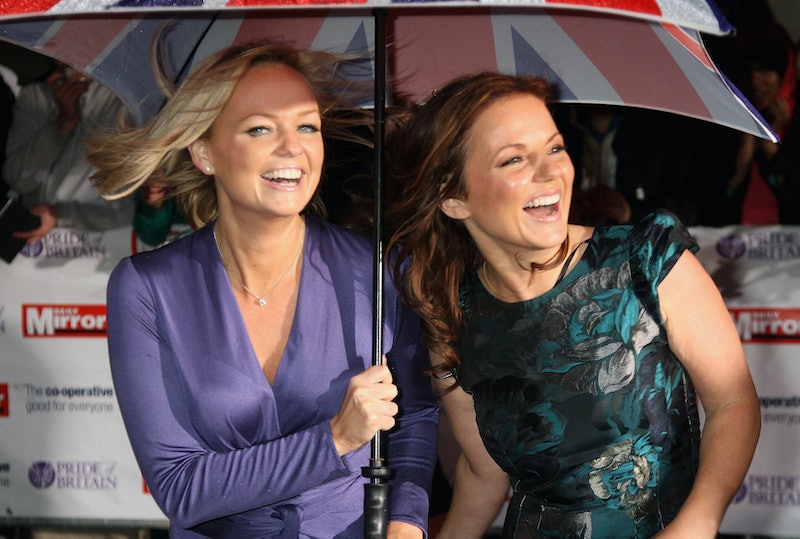 One a Spice Girl, always a Spice Girl. That's exactly the case for Baby Spice and Ginger Spice. Emma Bunton celebrated Geri Halliwell's second baby with a sweet shower. Halliwell shared photos from the special event on Instagram Saturday, Jan. 14 and captioned one, "My lovely friend Yassmin threw me a Baby shower xx [kissy face emoji]." Alongside another IG, she wrote, "Girl time."

In October 2016, Halliwell announced she was expecting her second child with her husband, Christian Horner. Alongside an adorable Instagram, which featured a drawing of a pregnant woman, the singer wrote, "God bless Mother Nature #mamaspice." How perfect is that nickname? Halliwell's rep also confirmed the news to People. She is already a mom to 10-year-old Bluebell Madonna from her previous relationship.

Despite the Spice Girls no longer being together as a band, they've continued to support one another. That also includes the love Bunton and Halliwell have for one another.

After announcing her pregnancy last October, Bunton presented Halliwell with the Honourary Gay Award at the 2016 Attitude Awards in London. The award honors a person who avidly supports the LGBT community. That same evening, Halliwell posted a cute Instagram of herself with Bunton at the awards and wrote, "Amazing night , @emmaleebunton — she presented me my @attitude award. Felt so good to share the joy."

No matter how special the moment or event in their lives, these two always seem to share joy with each other. Here are just a few other times they're love for one another was beyond adorable and most likely made Spice Girls fans' hearts melt.

When They Were In The Studio

Always rocking it out.

When They Have Girls' Night Out

Whenever Mel B. Joins In

Whenever Mel C. Joins In

When Either One Has A Birthday

Does it get cuter than this?

When They Take Selfies

Their girl power is truly infectious.