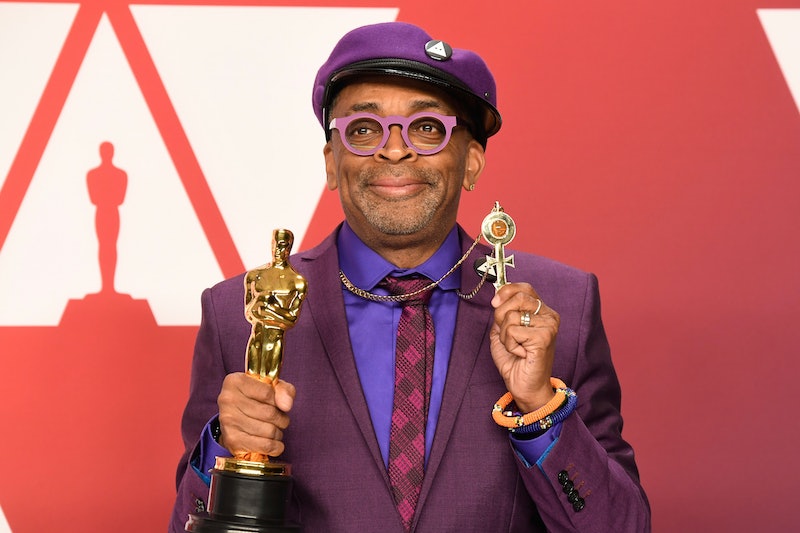 BlacKkKlansman's adapted screen play may have won Spike Lee an Oscar Sunday night, but it was the director and screenwriter's acceptance speech that provoked an attack from the White House. On Monday morning, President Trump tweeted about Spike Lee's Oscar acceptance speech, calling it a "racist hit" — because Lee called on the audience to mobilize for the 2020 elections and "make the moral choice between love versus hate."

The part of Lee's speech that the president was likely referring to came at the very end. "The 2020 presidential election is around the corner," Lee said. "Let’s all mobilize. Let’s all be on the right side of history. Make the moral choice between love versus hate. Let’s do the right thing!" Lee read from notes up until the very end, when he added, "You know I had to get that in there." The acceptance speech did not once mention Trump by name. Lee's main focus was actually not politics but slavery.

The next morning, Trump posted to Twitter, "Be nice if Spike Lee could read his notes, or better yet not have to use notes at all, when doing his racist hit on your President," Trump wrote, "who has done more for African Americans (Criminal Justice Reform, Lowest Unemployment numbers in History, Tax Cuts,etc.) than almost any other Pres!"

The earlier portions of Lee's speech focused on how it was 400 years ago this year — in 1619 — when slaves were first taken "from Mother Africa" and brought to what was then the British colony of Virginia. "Our ancestors worked the land from can’t see in the morning to can’t see at night," Lee said.

He then explained how that connected to him and his family:

My grandmother, who lived to be 100 years young, who was a Spelman College graduate even though her mother was a slave. My grandmother who saved 50 years of Social Security checks to put her first grandchild — she called me Spikie-poo — she put me through Morehouse College and N.Y.U. grad film. N.Y.U.!

Before the political moment, he wrapped up with "praise to our ancestors who have built this country into what it is today" and acknowledgment of the genocide of Native Americans.

This was not the only headline based on Lee's night at the Oscars. Variety reported that he nearly stormed out of the theater when Green Book was announced to have taken home the Oscar for best picture. He reportedly did go back to his seat but kept his back to the stage during the acceptance speech.

"I thought I was courtside at the [Madison Square] Garden, and the ref made a bad call," Lee told reporters after the awards ceremony. BlacKkKlansman was based on a true story, the life of Ron Stallworth, Colorado Spring Police Department's first black detective who infiltrated the KKK. Green Book was about a black pianist befriending a white driver who drove him through the South during segregation in the 1960s. It's also based on a true story.

"I’m snakebit. Every time someone is driving somebody, I lose," Lee said. In 1990, Lee's Do the Right Thing lost best picture to Driving Miss Daisy, which was about a black chauffeur driving around an old white woman.