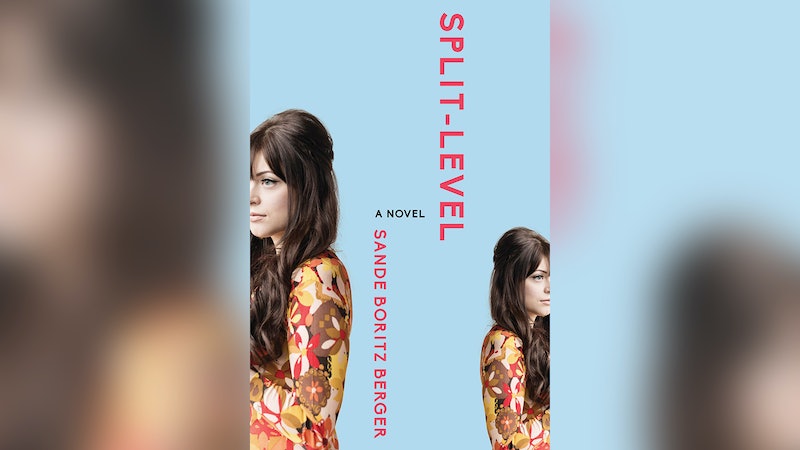 Less-than-traditional manifestations of marriage have become increasingly mainstream in our Puritanically-rooted culture, with mixed results. They’re glorified, politicized, and villainized, to varying degrees. Open marriage is the topic broiling at the center of Sande Boritz Berger’s second novel, Split-Level, and it’s filled with enough cringe-worthy moments to make anyone rethink marriage — monogamous, open, plural, and the like — entirely.

Split-Level transports readers to the New Jersey suburbs of the post-Nixon 1970s, where 29-year-old Alex Pearl — wife of Donny, mother-of-two — is about to find herself caught in the crossfire of a transforming American culture and a marriage unable to keep up with it. After Donny is found giving the Pearls’s teenage babysitter a "driving lesson" after dark, the couple enroll in a weekend at Marriage Mountain, a Jesuit-run marriage retreat. But rather than repairing the Pearls’s marriage, the retreat exposes Donny to the idea of an open one instead.

Alex Pearl definitely does not consent to the marijuana-fueled spouse-swapping that ensues with a neighborhood couple of Donny’s choice. In 1970s suburbia, however, Alex’s relative silence is interpreted by Donny as a blank check to get his rocks off however he pleases. And when he does — Alex is slow to join him — she discovers that non-monogamy is the biggest secret everyone around her has been keeping: her friends, her in-laws, even her own parents. It’s that "looking away for the greater good" that women have been taught to do for centuries. Except Alex is keeping at least one eye trained on Donny at all times.

“I see a parade of familiar men, doing what they like to do. Look, there’s Donny, Ben, Dad, and Rob, and all those who came before,” Alex thinks. An artist who — like her mother and grandmother before her — gave up her aspirations for marriage and motherhood, Alex begins to awaken to her long-suppressed resentment of the male-dominated culture she lives in. She moved from her life beneath her father’s roof to her life beneath her husband’s. Alex's generation might have the free love and bra-burning that her foremothers didn’t, but in the end they’re just promises that ring hollow. Languishing in compulsory domesticity is still languishing, whether you’re doing it braless or not.

“I left one and made a beeline to the other,” Alex thinks. “Nothing has changed, as I am still reacting, always reacting to their words, actions, or inactions. Maybe they change, these men: they get to walk in and out of so many doors, some, if lucky, break through walls; yet too often they hide, and when it works for them — they lie.”

There’s a moment in Split-Level when the tables seem just about to turn, when a few comments and some seemingly-loaded glances between Alex and Paula — the woman Donny has opened his marriage to — present an opportunity for the women to team up, liberate themselves from their male-directed sex lives, and collaborate to live on their own terms. It’s a moment they let pass. Perhaps in 2019, Alex and Paula would have become the couple left standing at the end: a domestically egalitarian and sexually fulfilled wolfpack of two. In 1970, there are bills to pay — and it’s the men who are paying them.

Reading like a slightly less-sinister Gone Girl with echoes of The Yellow Wallpaper, Split-Level is an analysis of the fallout of a marriage gone stale, a suburbia that stifles individuality, and what happens when a culture presents women with the ideology of liberation but nowhere to go. Ultimately, Alex does find somewhere to go — but it's not where she, nor anyone else, expected.