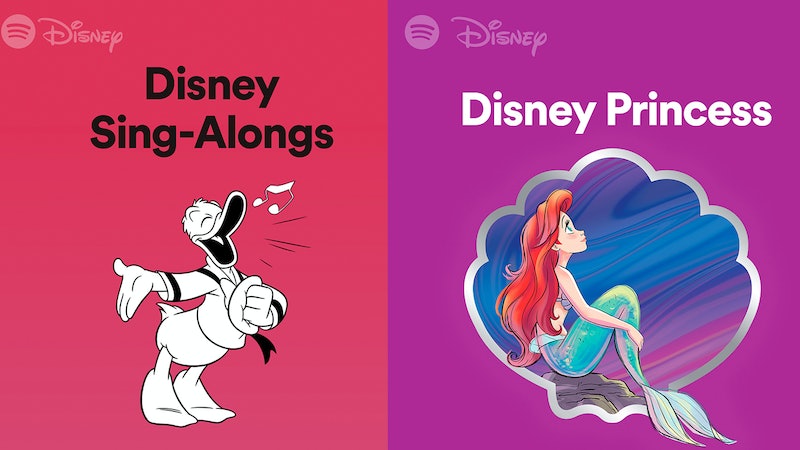 Prepare to belt your little Disney-stanning hearts out because Spotify just added a bunch of Disney playlists to their platform. Parents, gird your Spotify accounts — starting July 17, you can browse the Disney Hub on Spotify for Disney playlists, Disney soundtracks, and pretty much any other aural experience your Disney heart could desire. Do you feel like sobbing your face off today? The soundtrack to Up! will do the trick. Do you have a five hour road trip in your future? Surprise! Now it’s a Disney road trip as you enjoy five hours of the Disney Classics playlist.

“Stream playlists full of everything from The Little Mermaid to modern favorites like Frozen, to Star Wars instrumentals, and even Marvel movie soundtracks,” a Spotify blog about the Disney Hub states. “Plus, Disney compilations made for every part of your day—road trip, shower, or sleep time—will help ensure your life is nothing short of magical.”

As Spotify noted in a press release, users have streamed more than 2 billion minutes of Disney hits in the past year alone. For context, that’s like listening to Mary Poppins’ “Supercalifragilisticexpialidocious” a literal billion times. You would be listening to it for more than 1,900 years straight.

Now, Spotify listeners in the U.S. along with the U.K., Ireland, South Africa, Canada, Australia, and New Zealand, can listen to all things Disney on Spotify. Just search “Disney” on Spotify and you’ll be able to find the Disney hub where you can “stream playlists full of everything from The Little Mermaid to modern favorites like Frozen, to Star Wars instrumentals, and even Marvel movie soundtracks.”

The playlists are essentially hours of all your favorite Disney songs. They’ve got oldies but goodies. They’ve got new classics. They’ve even got three hours of Star Wars music.

In the Disney Hits, you’ll find the top most-streamed Disney songs on Spotify of all-time in addition to a bunch of your other favorites. If you’re curious whether the songs you keep on repeat are the same as everyone else, here’s the 10 Most-Streamed Disney Songs on Spotify:

If Frozen and Moana have been dominating you’re speakers for the past few years, it appears you are far from alone.

Perhaps you want to add a few new hits into your Disney repertoire. Understandably so. Here’s what other Spotify users have had on repeat recently, making them the most repeated Disney songs in the past month:

If you want to dig a little deeper, check out Walt Disney Records Spotify page. You can find even more curated playlists like Disney PRIDE and Disney Channel Hits (Camp Rock’s “This is Me” by Demi Lovato and Joe Jonas is on both playlists). There’s also more chilled out playlists like Disney Songs to Sing in the Shower and Disney Lullaby, so you can start and end your day with all things Disney.