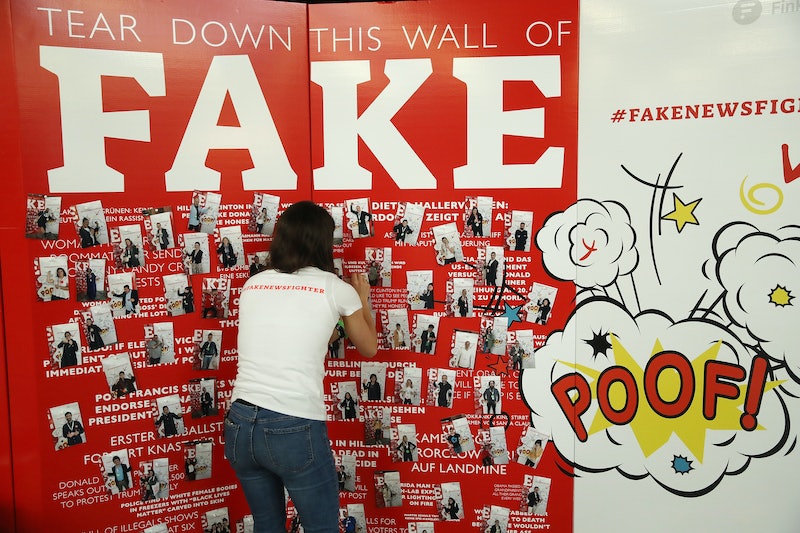 Millennials tend to get maligned pretty often in the media, but it turns out that they're actually better at deciphering the media than their older counterparts. According to new polling data from Pew Research Center, spotting fake news is a skill that some generations are better at than others — and that, of course, is a very important skill when it comes to reading and digesting the daily barrage of tweets and headlines.

This poll is a good way of measuring one element of media literacy, which Common Sense Media defines as "the ability to identify different types of media and understand the messages they're sending." Media literacy is an important skill to possess in the Trump era, where any given article you run across could potentially be mixing fact, misleading statements, and opinion. American public schools have recognized its importance, and more of them have begun teaching media literacy since President Donald Trump took office, as CBC reported in September 2017.

The poll then offered a statement of opinion that also had to do with immigration: "Immigrants who are in the U.S. illegally are a very big problem for the country today." The previous, factual statement was the poll question that confused the most people; 60 percent of 18 to 49-year-olds correctly said that it was a statement of fact, compared with 48 percent of people 50 and older. Participants fared better on the statement of opinion, with 74 percent of younger people and 61 percent of older people classifying it correctly.

This poll backs up academic literature on the subject of media literacy, which has continuously found that younger people are better at deciphering the news than older people are. No matter how much bad press millennials get, then, at least they'll probably be able to tell whether the reporting is based in fact or opinion.