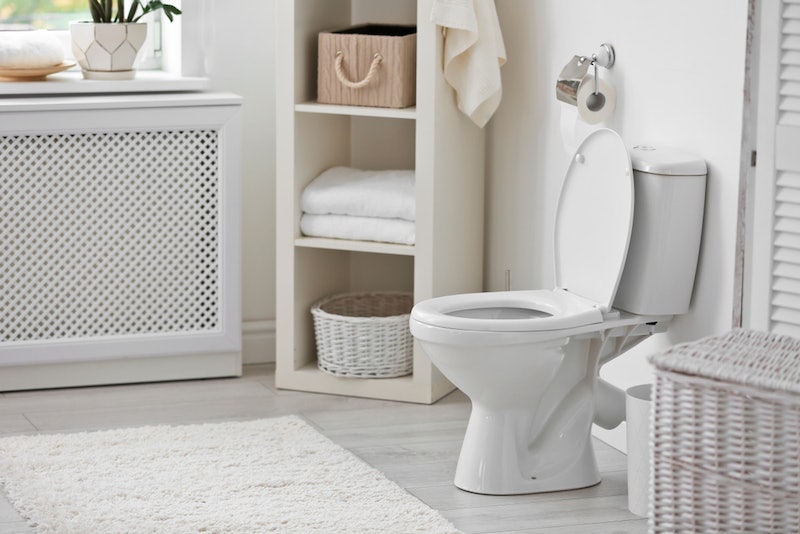 Unless you have a dog or a baby, you probably don't spend a lot of time talking about poop, but that doesn't mean poop isn't on your mind. If you want to up your pooping game in 2019, TIME reported that bathroom helpers like squatty potties can help improve your pooping experience, according to a new study published in the Journal of Clinical Gastroenterology. If you're not in the know about squatting to poop, things referred to in the scientific world as defecation postural modification devices have been proven to "positively influence [bowel movement] duration, straining patterns, and complete evacuation of bowels," the study reported.

In another study published in the journal Digestive Diseases and Sciences, researchers found that squatters were able to complete their pooping task in almost half the time of sitters. This begs the question: If squatting is so much better for you, why have we been sitting for so long? I went down a toilet rabbit hole so you don't have to, and how the western world came to sit instead of squat is equal parts fascinating and totally unsurprising.

"The first modern flushing toilet with a cistern was invented in 1596 by a man called John Harrington. Although his idea didn’t catch on, many people today still unintentionally honor the man when they tell their friends they’re going to the 'John,'" Teaching Nomad, a website that connects teachers from western countries to schools in Asia where squatting is the norm, explained. "1775 is the year that the first patent for a flushing lavatory was granted, but most working class people continued to use porcelain toilet pans. The invention of the modern toilet is often attributed to Thomas Crapper, but this is not true. His name is associated with toilets because his company made them, and the toilets, therefore, had his name on them."

Flushing toilets became a staple in the late 19th century, Smithsonian magazine noted. However, toilet paper didn't become a regular item in every home until the mid-20th century. Instead of TP, people used newspapers, according to Teaching Nomad. I guess that's one way to recycle. While squatting is the norm in some countries, in the U.S. most people were potty trained to sit. If sitting isn't working for you, you might want to join the squatting revolution.

Why are people so obsessed with squatting? "After sorting through descriptions of more than 1,000 bowel movements, the researchers found that 90 percent of people who used a Squatty Potty strained less, and 71 percent had faster bowel movements. Fewer users also reported feeling like they still had to go after using the bathroom," TIME reported about the study.

Chances are your house or apartment came with a regular old-timey throne toilet. Don't fret. Adding a stool in front of your toilet, or getting a Squatty Potty toilet stool or similar device, will have you squatting like a boss in no time. In addition, if you suffer from constipation, the Cleveland Clinic said on its website that squatting to go to the bathroom can help.

Hey, everybody poops. Dogs squat to poop and we pick it up in a bag and carry it around. Why is this normal whereas squatting to relieve yourself is weird? If you want to squat, give it a go. It just might become the best part of your day and inspire you to tweet about how you'll never go back to sitting on a toilet, even if it is the royal way.