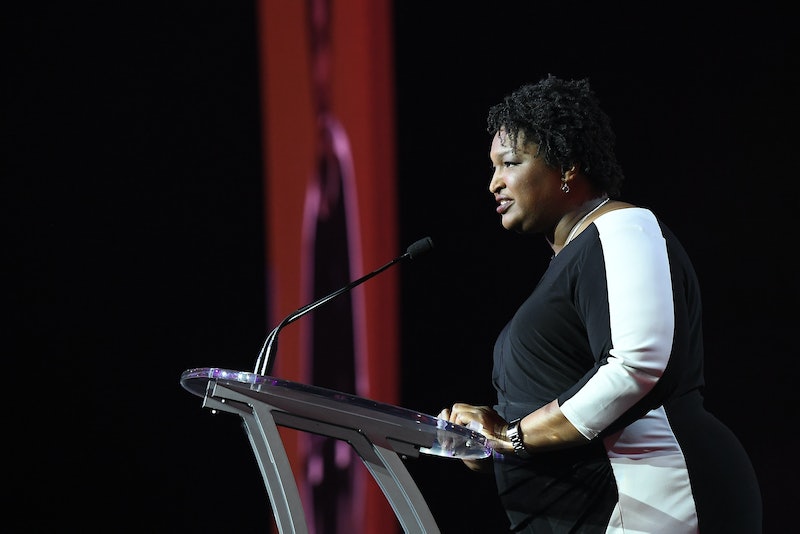 Georgia Republicans drew condemnation from voting rights activists years ago after invalidating the voter registration forms for over 1.4 million residents. Now, in the state's governor's race, Democrat Stacey Abrams' opponent Brian Kemp is under fire after an Associated Press report found that his office froze tens of thousands of black voters' registrations, in many cases without telling them.

Kemp is both the Republican candidate for governor and Georgia's secretary of state, which means that he's simultaneously running for election in the state and overseeing the state's voting laws and voter rolls. Georgia House Rep. Stacey Abrams, his Democratic opponent in the governor's race and longtime voting rights activist herself, claims that he's using his power as secretary of state to suppress the vote and ensure his own election in November, calling him an "architect of voter suppression" in a recent appearance on The Daily Show.

Bustle has reached out to Kemp's office for comment, and a spokesperson for his gubernatorial campaign said that he "is fighting to protect the integrity of our elections and ensure that only legal citizens cast a ballot." In reality, voter fraud is exceedingly rare in the United States: There were four documented cases of voter fraud in the 2016 election out of around 130 million ballots cast, according to the Brennan Center.

There are currently over 53,000 voter registration applications "on hold" in Kemp's office, according to the Associated Press. If they're not approved by Election Day, the applicants won't be allowed to vote. The people whose applications have been put on hold are overwhelmingly black; according to the Associated Press, nearly 70 percent of the voting applications held up in Kemp's office are from black applicants, while Georgia's population is only 32 percent black. What's more, Kemp's office has canceled more than 1.4 million voter registrations since 2012, including almost 670,000 in 2017 alone.

Two policies in particular have outraged voting rights activists: The state's "exact match" registration law, which was passed by the state legislature on 2017, and the mass cancellation of voter registrations, which Kemp's office did on its own accord.

Under the "exact match" law, a voter's registration form much precisely match their records at the Georgia Department of Driver Services or the Social Security Administration. This includes minutiae such as punctuation; an otherwise-valid registration form could be held up due to a missing hyphen, for instance, or a data entry error. Officials in Kemp's office have authority to place such registration's on hold.

However, the mass cancellation of voter registrations — which Kemp's supporters call "voter roll maintenance" and voting rights activists call "voter purges" — was not done under the auspices of any law. Rather, Kemp's office simply decided to cancel the voter registrations of anybody who hadn't voted in two general election cycles, a tactic that Ohio and other Republican-led states have also adopted in recent years. Voting rights activists sued over this policy, but in June, the Supreme Court upheld the laws in Georgia, Ohio, and elsewhere.

In total, Kemp's office canceled over 1.4 million voter registrations between 2012 and 2017, which is potentially up to 18 percent of the state's eligible voting population. According to an analysis by the activist group Let America Vote, around 850,000 of the canceled registrations came from Georgia residents who were perfectly eligible to vote in the state, while a minority of them were from people who were dead, felonious, or had moved out of state. Because Kemp's office doesn't inform residents when their registration is canceled, journalist George Palast has created a website for Georgians to check the status of their voter registration.

In August, Kemp's office came under fire when the secretary of state's website, through which Georgians can register to vote, was temporarily taken offline for "routine maintenance" in the midst of a massive voter registration drive.