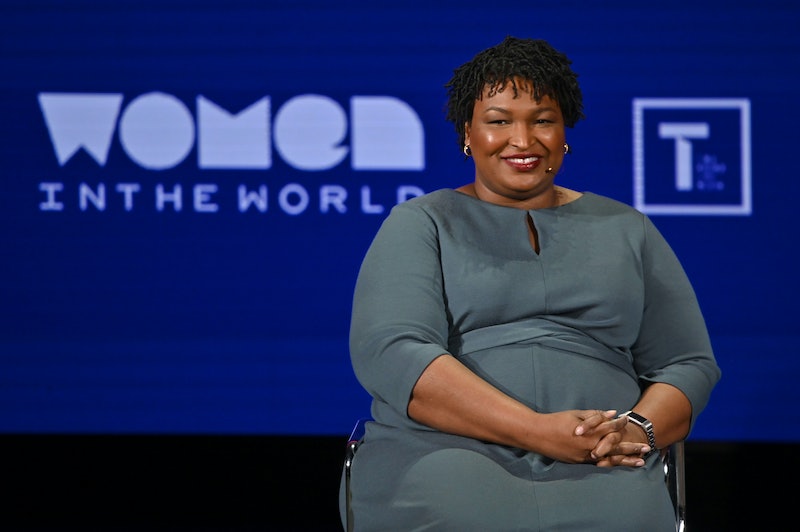 In 2018, Georgia's narrow gubernatorial race between Republican Brian Kemp and Democrat Stacey Abrams prompted allegations of voter suppression and an eventual lawsuit. But that wasn't the last time Abrams addressed voters' rights; she has since gone on to teach a graduate school class about the issue and now, Stacey Abrams says voter suppression is going to be an important issue in 2020.

During remarks to the Center of American Progress on Wednesday, Abrams suggested that tackling voter suppression could be a useful way to grapple with issues ranging from climate change to inaccessible health care, Politico reported. This approach could also help challenge anti-abortion legislation, like the restrictive law that recently passed in Abrams' own state.

Such legislation is "not the will of the people," Abrams said, but there is a solution to regressive legislation like this — and it's not "having everyone in America running for president." Abrams noted that dozens of Democrats have already launched 2020 presidential bids, and suggested that all of these candidates need to focus on systemic issues.

"If we want to amplify our voices and live our values, we have to tackle the single most threatening aspect of our election system, the worst part of what's happening in our democracy, and that is voter suppression," Abrams said Wednesday. "Whether we have 23, 24, 25 or 150 candidates for president, we should demand from every single person an adherence to the values we hold to be true: They must speak about voter suppression every day until every person who is legally entitled to vote has the right to vote in the United States of America."

Despite growing speculation, Abrams has not ventured into the 2020 presidential election, and she made it clear Wednesday morning that she was not about to announce her candidacy. Her main focus right now, as she pointed out during her remarks, is eliminating voter suppression both in Georgia and across the country.

The 2020 presidential candidates "must also be willing to look every voter in the eye and say, ‘I see you,'" Abrams said, per Politico. "'I understand your challenges. I see the barriers you face and I am willing to tackle those obstacles, not through vague language and not through opprobrium. But through action. Through policy. And through determination.’ Because when we see our voters and we give them their voices we will see the change we need in America and we will survive for another generation."

Last year, Abrams made history as the first black woman to win the Democratic Party's nomination for governor in Georgia. She lost the election to Kemp, Georgia's former secretary of state, but has since been vocal in criticizing voter suppression as a result.

“Let me tell you about Georgia, where I faced an opponent who happened to be the secretary of state and decided he should be the scorekeeper, the referee, and the contestant," Abrams said Wednesday. "Unfortunately, we also have one of the best voter suppression systems in the country operating in the state of Georgia."

Throughout her speech, Abrams talked about how black and brown voters routinely face discrimination at the polls and barriers to voting, and urged 2020 candidates to prioritize eliminating voter suppression in their campaigns.