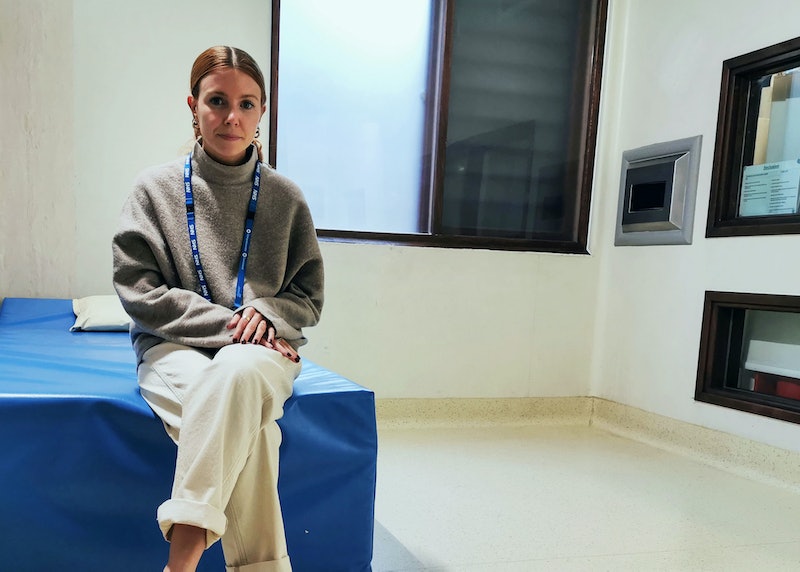 One in three people have a mental illness, according to a new BBC Three documentary that sees Stacey Dooley investigate the UK's mental health services. Young people are an at-risk age group with thousands visiting mental health units for treatment each year. To understand what this process is really like, Dooley meets a few of them at one of the oldest units in the UK: London's Springfield Hospital.

Rather than just seeing the ins and outs of the hospital's activities, the 32-year-old got actively involved. Not only does she communicate with patients and work with staff throughout the documentary, but she also experiences what it's like to make tough decisions that will impact another individual's life.

Dooley's time at the hospital demonstrates the pressures both patients and NHS staff are under. The presenter meets 19-year-old Kyle, who has referred himself to the unit, and sit in on discussions about whether to admit him or rely on community-based support.

She also spends time with Rachelle. Diagnosed with Emotionally Unstable Personality Disorder (EUPD), the 20-something patient tells Dooley about her experiences with mental illness and the treatment she hopes will help. As viewers will see, staff at Springfield Hospital believe Rachelle will progress more in a specialist centre in Cambridge.

Finally, Dooley turns her attention to the 136 unit, named after the number as it is the "local designated place of safety" under section 136 of the Mental Health Act. She meets a female patient, Laura, who has been brought there by police after being sectioned.

As well as speaking to patients about their experiences with NHS services, Dooley chats to mental health staff about their daily work and struggles. On Twitter, several people with experience of the UK's mental health units praised the presenter for her upcoming work.

"As a #mentalhealthnurse who has worked on the psychiatric wards, it will be interesting to see how this documentary portrays the real life situations that really do occur. It’s a good job you’re not scared of hard work @StaceyDooley You’ve got this!" one person tweeted.

Another wrote: "So excited for this. As a previous inpatient myself, I feel it is so important to show people what happens on psychiatric wards. Mine saved my life."

A recent Observer investigation found serious delays in mental health treatment across the nation. Despite NHS targets requiring 75% of patients to be seen within six weeks, the paper uncovered "a huge postcode lottery" in average waiting times for the NHS' Improving Access to Psychological Therapies (IAPT) programme.

In some areas, patients received a first appointment in just four days; in others, they waited for 55 days. The time between the first assessment appointment and the second appointment, in which treatment actually begins, also hugely varied around the UK. Average waits ranged between 13 and 112 days.

“Since they were introduced 10 years ago, IAPT services have dramatically increased the numbers of people getting access to mental health support," chief executive of mental health charity Mind, Paul Farmer, told the Guardian. "But services are clearly struggling to cope with demand."

Not getting the right support can be life-threatening," he stated, adding: “No one should have to wait three months between their assessment and starting treatment, and how long you wait shouldn’t depend on where you live."

Stacey Dooley: On The Psych Ward is available to watch on BBC iPlayer from 6 a.m. on Feb. 19.