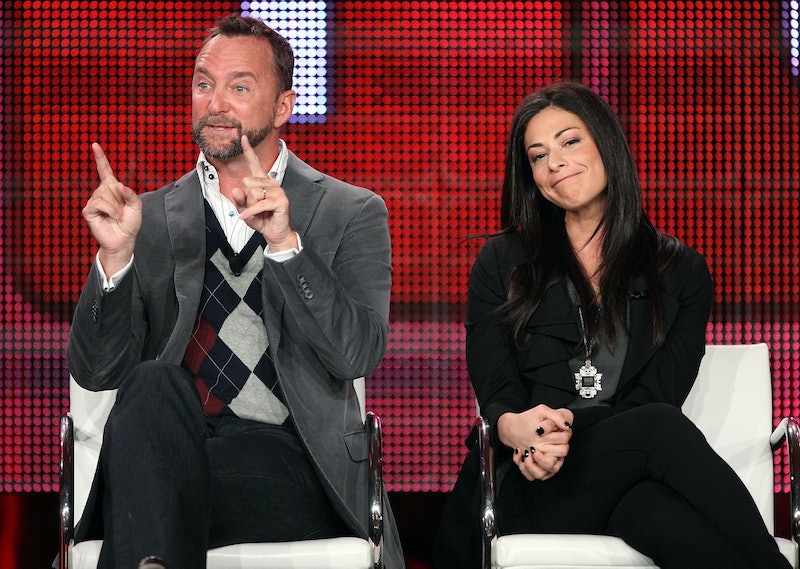 In news that has been described as "without a doubt, the greatest betrayal of our time," Stacy London has blocked Clinton Kelly on Twitter. If you don't know who London and Kelly are (they're better know as "StacyandClinton"), then you were not one of the many viewers of the TLC show What Not To Wear between 2003-2013. And if you do know who StacyandClinton are, then you know that this is straight up devastating news.

Word came out that London had, apparently, blocked Kelly on Twitter on Wednesday afternoon, and it was very clearly news to Kelly, as well. The former professional proponent of a sensible blazer and current host of The Chew posted a screenshot of Twitter's message that London had blocked him along with the caption, "Alllll righty then." Did your heart rate just increase? I had the same experience.

It appears that Kelly found out London had blocked him when he was viewing her page after they were both tagged in the same tweet. Someone seemingly watching an old episode of What Not To Wear tweeted along with a screenshot from the show, "I’m confused. Are you supposed to be telling other people what not to wear by wearing those items first? #whatnottowear @clinton_kelly @stacylondon @TLC #thatcouchtho." Kelly responded to that tweet, writing, "I’m confused too. You seem to think I give a crap about your opinion of something I wore a decade ago."

It was soon after that he posted the below screenshot:

Kelly has been responding to Twitter users asking him for details in the time since he posted the screenshot. In one response he wrote, "Stfu someone tagged us in the same tweet," which implies that this was, in fact, how he found out.

As for other details of what's going on here, Kelly responded to one tweet that said he talked "mad sh*t about her in his book." (Kelly's book, I Hate Everyone, Except You came out in January of this year.) The TV host wrote in response, "Don’t go spreading out-of-context bullsh*t. You obviously didn’t read the book."

In an interview with My Statesman about the book in January, Kelly made it seem that the issue was that he and London were around each other too much, which caused a strain, but that there were no hard feelings even though they hadn't spoken for years. "We spent so much time together for 10 years," he told the publication. “It was funny in the beginning when we completed each other’s sentences ... It got to be like, ‘OK, we need a break from each other.’”

In response to another fan tweet that said simply "what", Kelly responded:

Another fan said, "spill some tea clinton im begging you my DMs are open" to which Kelly wrote:

Clearly, the second news story here is that Clinton Kelly has a bold and sassy comeback for everything thrown at him on Twitter. See also:

London has not commented on blocking Kelly or on the response from fans, although she did respond to the original tweet in which she and Kelly were both tagged:

While Clinton says he is not shook, fans of What Not To Wear definitely are.

An Entire Generation Was Traumatized

"I am traumatized" speaks to the entire WNTW viewing audience.

Stacy! Are you there, Stacy?!

Titus Was Brought Out

Titus being shocked while on the library computer means serious business.

As Was Gasping Beyoncé

Beyoncé, one can assume, is also devastated.

The Country Was In Threat Of Being Further Divided

Going to go ahead and assume that wasn't it.

When it comes down to it, What Not To Wear has been off the air for four years now and London and Kelly aren't attached to each other. They aren't StacyandClinton, they're Stacey [long pause] and Clinton — two separate people, who probably still refer to a "nice pant" or a "chic shoe" in the singular because it's fancier that way.

Bustle has reached out to reps for Kelly and London for comment on the Twitter blocking, but did not receive a response at the time of publication. Carmindy and Nick Arrojo have not yet posted about the events.