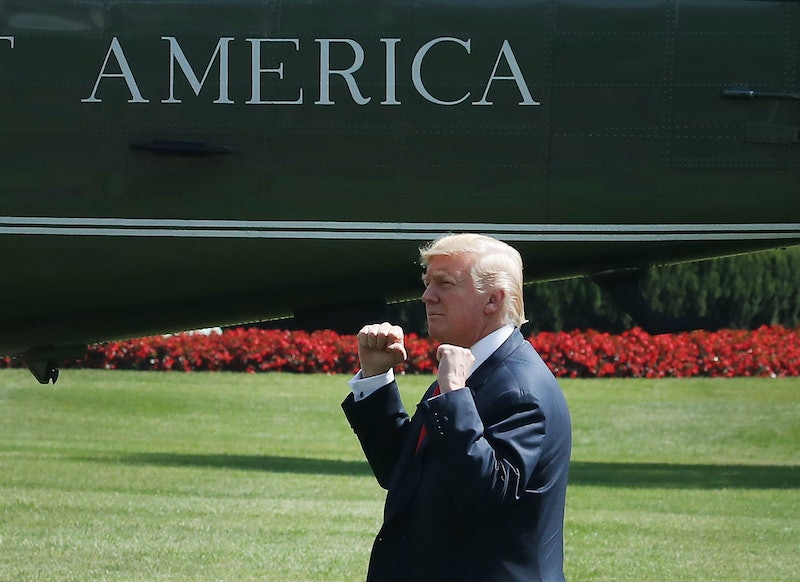 Everyone likes to be told that they're great, but some people like it so much that they pay support staff to do it for them. According to a new Vice report, President Donald Trump receives folders of good news about himself twice daily, culled by White House staff to support his emotional state.

Anonymous former and current White House officials told Vice that Trump receives a folder filled with positive news, tweets, and quotes about himself, once in the morning and once in the afternoon. Former White House chief of staff Reince Priebus and former press secretary Sean Spicer would reportedly tussle over who got to bring Trump the folder, ostensibly so they could be the one to put him in a good mood.

“Priebus and Spicer weren’t in a good position, and they wanted to show they could provide positive coverage,” a current White House official told Vice. “It was self-preservation.” Since both have now been let go from the Trump administration, it's safe to say that this strategy still wasn't enough.

Vice reached out to Spicer for comment on the matter, but received an ambiguous answer. "While I won’t comment on materials we share with the president, this is not accurate on several levels,” Spicer said, but did not clarify which aspect of the report was inaccurate.

According to Vice, the process of collecting these positive news stories actually starts at the Republican National Committee headquarters, which contains a war room for monitoring news and social media related to the party. The information is gathered and then sent over to the White House Communications Office, which performs a second check before giving the 20-25 page report to Trump.

However, the wealth of negative coverage on Trump sometimes made that mission difficult, prompting White House staffers to pad the folder's contents — "On days when there aren’t enough positive chyrons, communications staffers will ask the RNC staffers for flattering photos of the president," writes Alex Thompson, Vice's politics and policy editor.

For its part, the RNC said it has no qualms with providing this service for Trump. “The RNC is always going to work to defend the White House, the administration, and its members of Congress, and our war room’s efforts help capture and drive how our team can echo that defense,” RNC spokeswoman Lindsay Jancek told Vice.

Abstractly, this folder of rainbows and smiles isn't a bad thing. Everybody needs a little pick-me-up sometimes, and being president is one of the most stressful jobs in the world. However, the allocation of White House staff and resources for the sole purpose of stroking Trump's ego has a lot of people up in arms. Hundreds Twitter users have pointed out the tendency for conservatives to call people "snowflakes" for not being able to take criticism, and how it seems painfully apropos in this situation.

Like so many things in the Trump administration, this bizarre directive highlights the disparity between law and precedent when it comes to the workings of the White House. It's unclear what the effect of this daily briefing is, but if it's beneficial to the American people in any way, it might be an unconventional move that's necessary for such an unconventional president.