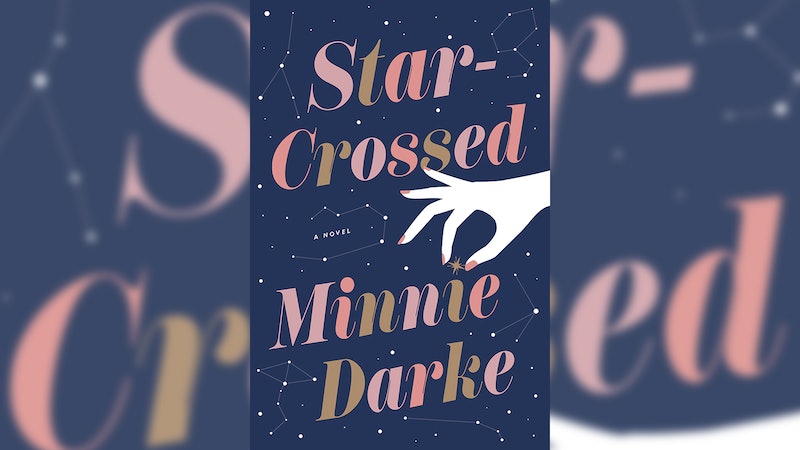 Are you the kind of person who uses a daily horoscope to help you make decisions, or do you like to take fate into your own hands? Either way, you'll probably love Star-Crossed by Minnie Darke, a smart, sweet love story about friendship, destiny, and the power of choice. It doesn't hit shelves until May, but you can read an exclusive excerpt from it below.

After running into her childhood sweetheart Nick as an adult, Justine is convinced their romance is on the road to being rekindled. All the signs point to reconciliation: Not only is Nick a true believer of astrology who uses his horoscope to help him make major decisions, he is a devoted reader of the magazine Justine writes for. She may be a skeptic when it comes to the power of the stars, but that doesn't stop her from taking Nick's horoscope, and destiny itself, into her own hands. The only problem? Nick isn't the only Aquarius who relies on astrology to help guide their everyday life — and destiny just might get in the way after all.

This swoon-worthy love story isn't available until May 21, but you can start reading from Star-Crossed right now by checking an exclusive excerpt, below:

By the time Justine finished work that evening, it was half past six. Her hair fell in lank waves around her face, her skin felt gray and —thanks to the glitchy printer — there was a spray of ink down one side of her dress. She was hungry, too, for although Falafel had not precisely eaten her chicken curry wrap, he had toyed with it enough to make it inedible, and there’d been no time to seek out a replacement lunch.

As she passed beneath the mosaic star at the gatepost, she glanced up at it resentfully.

“Inspirational rays,” she muttered, then stepped out onto Rennie Street.

Justine walked three blocks and turned left into Dufrene Street, where the after-work drinkers were spilling out of the Strumpet and Pickle onto the sidewalk. She crossed to the other side of the road, and was just about to pass through the eastern gate of Alexandria Park when she stopped in her tracks, turned around and looked back at the series of glamorized warehouses on the other side of the road that made up the markets.

It’s difficult to know what caused her to do this, precisely at that moment. Perhaps the sun was working an angle on her from its current position in Pisces, or the moon and Venus together were tugging on her consciousness from their love seat in Aquarius. Or maybe Jupiter had sent down some kind of vibe from where it was stomping about in Virgo. Or perhaps it was only that Justine’s subconscious had subtly suggested that there was a way to delay the inevitable moment when she would walk in through the door of her empty apartment, queue up the next episode of the BBC’s latest Emma, think vaguely about calling best-pal Tara, but instead collapse on the couch with a helping of Vegemite toast for dinner.

It’s difficult to know what caused her to do this, precisely at that moment.

Justine stood poised, at the very edge of the sidewalk, and considered. Was there time? The markets didn’t close until seven. She checked her watch. Oh, yes, there was time.

She glanced inside the basket-weave bag that she carried in the crook of her arm, and was happy to see that her black Sharpie pen was indeed there, lying in wait, in its own special pocket. She lowered her sunglasses from the top of her head and approached.

Alexandria Park Markets was a place Justine only rarely went to buy food. More often, she entered its cool, high-ceilinged space in the same spirit as she would an art gallery. She liked to check out the strange and exotic blooms that filled the enormous Mason jars at the florist’s, and to pass by the fishmonger’s to admire the gleaming sea creatures on their beds of ice.

She made her way past the florist’s, past the butcher’s and the baker’s, toward the fruit and vegetable corner. She sidled up to a timber crate full of watermelons, lifted her sunglasses and looked over to the display of Hass avocados. And there it was, perched on a plastic stalk above the fruits. The offending sign.

Would the man never learn? Here was a fruit seller who was clearly competent. No, he was more than competent. He could stack pomegranates so that they looked like the crown jewels of some far-flung, exotic nation. He could select apples of invariable perfection and keep grapes misted with water so that they looked appetizing all day long. It made no sense that he would stubbornly and consistently continue to misspell “avocados.” And yet he did. Week in and week out, Justine corrected his error, and the grocer responded by throwing away the amended signs and replacing them with yet another one for advo-bloody-cados. It was infuriating. But Justine was determined not to be beaten.

"It made no sense that he would stubbornly and consistently continue to misspell “avocados.” And yet he did. Week in and week out, Justine corrected his error..."

She waited until the assistant behind the counter was distracted, then whipped out her Sharpie. Swiftly, she struck out the extraneous d. avocados. Ah, yes. This was good.

Satisfied that the world was now restored to rightness, Justine spun around, intending to make a dash for the markets’ Dufrene Street exit. But she had only taken a few paces when she ran into a giant fish.

It was hard to tell what kind of fish it was, exactly. It was silver-gray with lips rimmed in pink satin ribbon. Its eyes were enormous, yellow and convex, like the painted halves of a Ping-Pong ball. A very upright dorsal fin began at the back of the creature’s head and ran in spiked waves down the length of its spine. The fish had large silver gloves for pectorals, and it said, “Should you be doing that?”

She was just about to get argumentative, when she recognized the human face that was framed by a cut-out oval of silvery fish-fabric.

“Oh my God. You haven’t even changed,” Justine said, stunned and smiling.

Nick made a doubtful face and glanced down at his fish suit. “Thanks, I think.”

“Years,” Nick agreed, and as he nodded the silver lamé expanse of the suit quivered all over.

“Eleven? Twelve?” Justine offered, as if she were guessing. “It couldn’t have been that long,” he said.

But it was. It was twelve years, one month, and three weeks. And Justine knew this, precisely.

Excerpt from STAR-CROSSED Copyright © 2019 by Minnie Darke. All rights reserved. Published in the United States by Crown, an imprint of Penguin Random House New York.