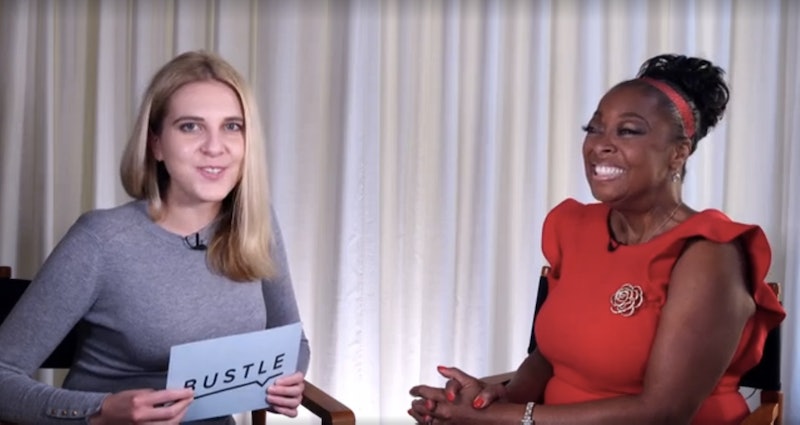 February is Heart Health Month, and Bustle's Emily Shire spoke with Star Jones on Facebook Live Monday to discuss the state of American cardiovascular healthcare in 2017. Jones, clad head-to-toe in bright red (including a fabulous pair of red shoes), explains that she wears the color all throughout February as part of the Go Red for Women campaign, which is an American Heart Association (AHA) initiative to raise awareness of heart disease in women. Jones, who currently serves as a spokeswoman for the campaign, tells Bustle that heart disease is currently the number-one killer of women, African-Americans, and Americans overall.

Jones is a member of each of these demographics, of course, but the cause is also personal to her because she herself survived open-heart surgery in 2010. After the experience, she tells Bustle, "my purpose was defined," and she sought to educate other Americans about ways to reduce their heart disease risk. In particular, Jones tells Bustle that a lot of women fail to associate the risks of heart disease with their own lives:

Well, most women think that heart disease is an old white dude's disease. You visualize an old white guy sitting at Sparks Steak House with a big prime rib and an overstuffed baked potato and a bunch of bread, drinking a brandy. That's really not the face of heart disease — yes, it impacts on men that way, but it really can impact on women ... women who have model bodies and athlete bodies, as well as those who are obese. It can happen to anyone.

There are many common myths about heart disease, but this seems to be one of the most prevalent: that only men, or only elderly people, or only people with extremely high-fat diets can be at risk. Jones seeks to raise awareness of the fact that in reality, heart disease can be a threat to anyone's health.

There are a variety of ways you can take care of your own heart health, like eating a healthy diet and getting cardiovascular exercise, but Jones also emphasizes the importance of preventative care, which she received prior to her heart surgery.

However, Jones notes that access to preventative treatments can be difficult:

Especially when it comes to minority women. African-American women die much more frequently from heart disease-related issues. You want to know why? Because we don't have the same access. That's why making sure that affordable care is available to all women is my priority.

Jones tells Bustle that she gets an annual wellness checkup around her birthday, and that access to that sort of preventative care is a major benefit of programs like the Affordable Care Act (which she helped promote). "Your right to health is your most valuable right," Jones says, adding that women should reach out to their legislators to protect the Affordable Care Act. She also encourages knowing your own personal health information, like BMI, refraining from smoking ("come on, y'all, that's just nasty," she says) and making strong lifestyle choices about diet and exercise.

Ultimately, while the future of the Affordable Care Act may be uncertain, it is guaranteed that women's heart health will continue to be a significant, pressing issue for millions of Americans annually.