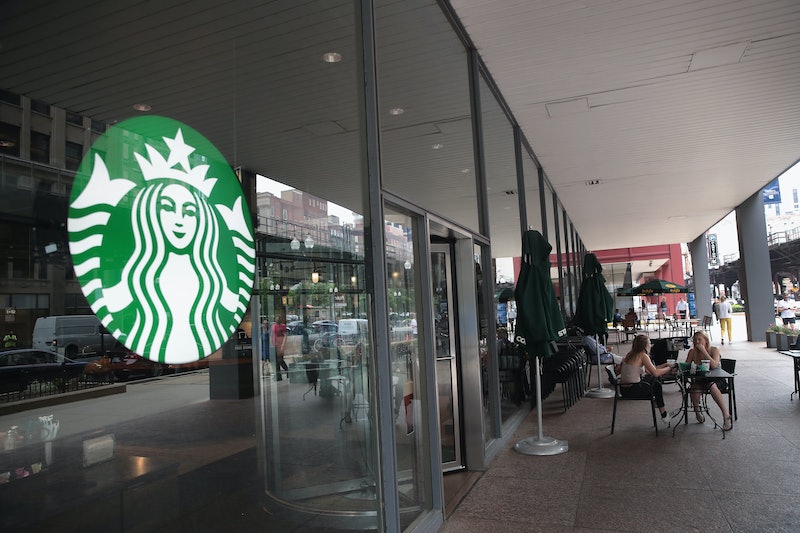 For transgender people who seek gender affirmation surgery, access to the potentially lifesaving operations involved in top and bottom surgeries is often stymied by insurance companies that deem the procedures unnecessary or cosmetic only. For trans employees of Starbucks, however, access is about to get a whole lot easier: the coffee brand recently announced that its new comprehensive, affirming trans healthcare policy will cover difficult to access procedures like facial feminization surgery and voice therapy, according to a statement posted on Starbucks' website about the policy.

Starbucks has covered gender affirmation surgery for its trans employees since 2012, but the expanded policy will include "a host of procedures for transgender partners in the U.S. that were previously considered cosmetic, and therefore not covered, such as breast reduction or augmentation surgery, facial feminization, hair transplants and more," the company wrote in the statement.

The coffee brand told them. in a statement that, "Last year, as a result of conversations with transgender partners who provided their feedback, Starbucks took a fresh look at the health care benefits in order to see where we could improve."

Consequently, the new policy was developed in coordination with the World Professional Association for Transgender Health (WPATH), making Starbucks "the first company in the world to ask WPATH to help translate their recommended standards of care [for trans employees] into a medical benefits policy," said Jamison Green, the former president of WPATH, in Starbucks' statement.

"Starbucks was not afraid to ask all the right questions and demand that people get the best possible care," Green said. "We produced a list of the most crucial benefits and those that are deemed problematic to insurance companies, such as facial feminization and electrolysis."

Green also noted in the statement that while some procedures may seem optional, they "aren't optional for trans people [...] but are essential in their quest to be who they are," according to the statement. A procedure such as electrolysis can be "lifesaving," he explained.

Starbucks said in its statement that while, according to the Human Rights Campaign, the number of companies offering trans-inclusive healthcare to their employees has risen over the years, going from zero percent in 2002 to 79 percent in 2018, with businesses covering procedures like "counseling by a mental health professional, hormone therapy, medical visits to monitor hormone therapy and surgical procedures," there are still many employers that "exclude procedures they consider cosmetic." (It should be noted that the only businesses counted for this percentage are business included in the Human Rights Campaign's annual Corporate Equality Index.)

Tate Buhrmester, who has been a Starbucks employee for 15 years, said in the company's statement that inclusive healthcare policies "[make] trans people feel like they are people, like they matter and their health matters."

Buhrmester added, "Starbucks is taking a stand and standing up for trans people and saying that our procedures aren’t just cosmetic — they are lifesaving. They’re affirming. They’re vitally important to trans people and it’s not something just to be seen as a cosmetic procedure that’s optional, because for a lot of people, it’s not optional for them."

Ron Crawford, vice president of benefits at Starbucks, said in the statement that the coffee brand is the first to engage directly with WPATH to ensure its policy is in line with WPATH's Standards of Care booklet, which is a 120-page list of recommendations, them. reported.

"Nobody else is doing this," Crawford said, adding that, "We would love to see more employers doing this."

Starbucks' new policy is a major show of support for its trans employees, especially considering some trans folks don't want top or bottom surgery, but still need access to other procedures, like voice therapy. Creating comprehensive coverage plans with the consultation of transgender employees and experts is a model for others in the industry, and other companies seeking to improve their healthcare policies for trans employees can look to Starbucks as an example.