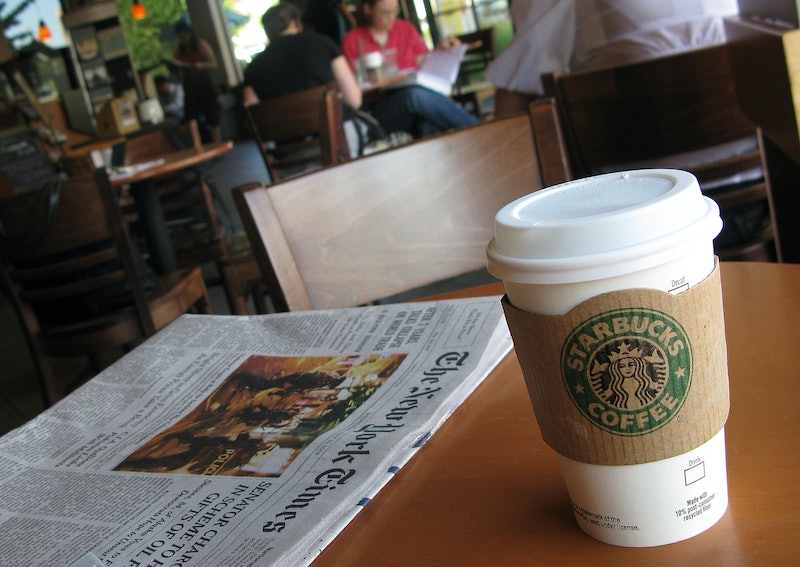 The corporate resistance to President Donald Trump's refugee and immigrant ban started in Silicon Valley, but it officially spread to your corner Starbucks over the weekend. Howard Schultz, the coffee shop chain's CEO, penned a public letter to employees that details the way that the company will resist Trump's discriminatory policies — particularly those that have already been announced, like the ban that specifically prevents refugees, immigrants, and any traveler from seven Muslim-majority countries from coming to the United States. And this isn't just lip service. In order to resist Trump, Starbucks plans to hire 10,000 refugees.

That's the most striking part of Schultz's plan: He minces no words in establishing the threat that the Trump administration pose to his worldview. "We are living in an unprecedented time," Schultz writes, "one in which we are witness to the conscience of our country, and the promise of the American Dream, being called into question." He goes on to say that "civility and human rights" are under attack, and expands upon how Starbucks can make a difference. "We will neither stand by, nor stand silent, as the uncertainty around the new Administration’s actions grows with each passing day," Schultz writes.

The refugee hiring plan will be carried out around the globe at Starbucks-owned locations and those run by partners. Schultz pointed out that 65 million people around the world are registered as refugees, and that 10,000 will be hired over five years. The initiative will begin in the United States, with a focus on "those individuals who have served with U.S. troops as interpreters and support personnel," in countries around the world like Iraq and Afghanistan.

Another key part to Schultz's plan is to support the Deferred Action for Childhood Arrivals, or DACA. He said he has been in touch with senators and that Starbucks already reimburses employees who have to pay the biennial fee to the program.

Furthermore, he promised to employees that if they are eligible for benefits through the company, they will be able to return to company health insurance policies if Obamacare is repealed, and they won't have to wait for an open enrollment period.

And, finally, the company doubled down on business with Mexico:

We stand ready to help and support our Mexican customers, partners and their families as they navigate what impact proposed trade sanctions, immigration restrictions and taxes might have on their business and their trust of Americans. But we will continue to invest in this critically important market all the same.

After detailing the company's plans, Schultz encouraged employees to make their voices heard — and to vote. "We are all obligated to ensure our elected officials hear from us individually and collectively. Starbucks is doing its part; we need you to use the collective power of your voices to do the same," he writes — with a caveat that employees should respect the diverse viewpoints of their customers.

Well done, Starbucks. This is corporate responsibility in the Trump era.

The full letter is below.

I write to you today with deep concern, a heavy heart and a resolute promise. Let me begin with the news that is immediately in front of us: we have all been witness to the confusion, surprise and opposition to the Executive Order that President Trump issued on Friday, effectively banning people from several predominantly Muslim countries from entering the United States, including refugees fleeing wars. I can assure you that our Partner Resources team has been in direct contact with the partners who are impacted by this immigration ban, and we are doing everything possible to support and help them to navigate through this confusing period.

We are living in an unprecedented time, one in which we are witness to the conscience of our country, and the promise of the American Dream, being called into question. These uncertain times call for different measures and communication tools than we have used in the past. Kevin and I are going to accelerate our commitment to communicating with you more frequently, including leveraging new technology platforms moving forward. I am hearing the alarm you all are sounding that the civility and human rights we have all taken for granted for so long are under attack, and want to use a faster, more immediate form of communication to engage with you on matters that concern us all as partners.

I also want to take this opportunity to announce specific actions we are taking to reinforce our belief in our partners around the world and to ensure you are clear that we will neither stand by, nor stand silent, as the uncertainty around the new Administration’s actions grows with each passing day:

Support for DACA: As I wrote to Senators Graham and Durbin this week, we are enthusiastically behind their work to support “Dreamers” across our country – including those young men and women who are part of the Deferred Action for Childhood Arrivals (DACA) program. There are nearly three quarters of a million hardworking people contributing to our communities and our economy because of this program. At Starbucks, we are proud to call them partners and to help them realize their own American Dream. We want them to feel welcome and included in our success, which is why we reimburse them for the biennial fee they must pay to stay in the program and why we have offered DACA-related services at our Opportunity Youth hiring fairs.

Hiring Refugees: We have a long history of hiring young people looking for opportunities and a pathway to a new life around the world. This is why we are doubling down on this commitment by working with our equity market employees as well as joint venture and licensed market partners in a concerted effort to welcome and seek opportunities for those fleeing war, violence, persecution and discrimination. There are more than 65 million citizens of the world recognized as refugees by the United Nations, and we are developing plans to hire 10,000 of them over five years in the 75 countries around the world where Starbucks does business. And we will start this effort here in the U.S. by making the initial focus of our hiring efforts on those individuals who have served with U.S. troops as interpreters and support personnel in the various countries where our military has asked for such support.

Building Bridges, Not Walls, With Mexico: We have been open for business in Mexico since 2002, and have since opened almost 600 stores in 60 cities across the country, which together employ over 7,000 Mexican partners who proudly wear the green apron. We have sourced coffee from Mexico’s producers and their families for three decades and last fall, we also announced the creation of a farmer support center in Chiapas to help accelerate our collective ability to grow and export some of the world’s finest coffees from this important growing region, while donating more than $2 million to support the livelihood, food security and water quality of coffee producing communities in Oaxaca. With the support of thousands of Starbucks partners and millions of customers, we have also donated over a million coffee trees to support 70,000 families, and we will be expanding the initiative this year to generate another 4 million tree donations. Coffee is what unites our common heritage, and as I told Alberto Torrado, the leader of our partnership with Alsea in Mexico, we stand ready to help and support our Mexican customers, partners and their families as they navigate what impact proposed trade sanctions, immigration restrictions and taxes might have on their business and their trust of Americans. But we will continue to invest in this critically important market all the same.

Our Healthcare Commitment to You: Finally, let me restate what we have recently communicated with you about the Affordable Care Act – our commitment remains that if you are benefits eligible, you will always have access to health insurance through Starbucks. Many of you have expressed concerns that recent government actions may jeopardize your ability to participate in the Affordable Care Act. If the recent Executive Order related to health care remains in place and the Affordable Care Act is repealed causing you to lose your healthcare coverage, you will always have the ability to return and can do so within 30 days of losing that coverage rather than having to wait for an open enrollment period. If you have any questions or concerns, please contact the Benefits Center at 877-728-9236.

In the face of recent events around the world, let me assure you that we will stay true to our values and do everything we can possibly do to support and invest in every partner’s well-being while taking the actions that are squarely within our ability to control. This is our focus: providing a Third Place of respite for those around the world who seek it, daily.

Starbucks has and will always stand for opportunity – opportunity for our young people who are working to land their first job in the 75 countries where we do business, opportunity for our farmers who care so deeply for the highest of quality coffee we offer to customers all around the globe, and yes, opportunity for those who come to America in search of their own fresh start – whether that is with Starbucks directly, or through our suppliers or our partner companies.

If there is any lesson to be learned over the last year, it’s that your voice and your vote matter more than ever. We are all obligated to ensure our elected officials hear from us individually and collectively. Starbucks is doing its part; we need you to use the collective power of your voices to do the same while respecting the diverse viewpoints of the 90 million customers who visit our stores in more than 25,000 locations around the world.

So, while we seek to understand what the new Administration’s policies mean for us and our business both domestically and around the world, I can assure you that we will do whatever it takes to support you, our partners, to realize your own dreams and achieve your own opportunities. We are in business to inspire and nurture the human spirit, one person, one cup and one neighborhood at a time – whether that neighborhood is in a Red State or a Blue State; a Christian country or a Muslim country; a divided nation or a united nation. That will not change. You have my word on that.