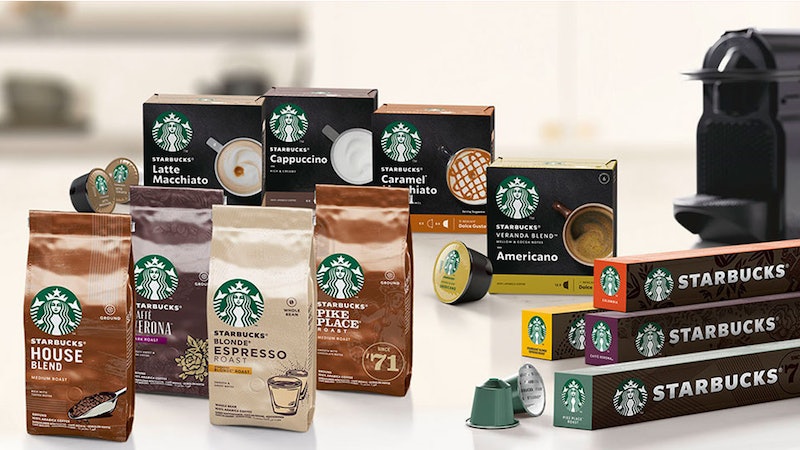 Coffee drinkers, rejoice and be caffeinated! After partnering up last year, Nestlé and Starbucks have just announced their new line of at-home coffee products including eight Starbucks Nespresso-compatible pods. We are all in a committed throuple with coffee and capitalism, and what are we to do but celebrate in our caffeine frenzy?!

The Nespresso pods and their at-home coffee brethren are the first product range to be announced since the Nestlé Starbucks Coffee Alliance was officially formed in August of last year. What even is a “coffee alliance,” you may be wondering. It sounds like a government agency and a corporate buzzword had a baby, and that baby wears a three-piece suit while sipping on a cappuccino. As Mark Schneider, Nestlé CEO, said in a press release, “This partnership demonstrates our growth agenda in action, giving Nestlé an unparalleled position in the coffee business with a full suite of innovative brands. With Starbucks, Nescafé and Nespresso we bring together the world’s most iconic coffee brands.” So, it’s basically what I said.

For those of us who only speak coffee, the Starbucks pods for Nespresso will be available to purchase later this year in the U.S. International consumers will be able to enjoy the pods a little bit sooner, with their launch date happening in the coming months.

So, what can you expect from these Starbucks Nespresso pods? Latte art? The comfort and casual aura of a part-time barista? Your name spelled wrong on a to-go cup? According to a press release emailed to Bustle, “The new range of coffee products includes a variety of signature Starbucks blends and single-origin coffees, as well as a selection of classic beverages such as Caramel Macchiato and Cappuccino.”

The inclusion of Caramel Macchiato is especially good news for those of us who prefer our coffee to taste like a dessert that just happened to be prepared in the same space as a pot of coffee.

According to the press release, the products will be available both in grocery stores and through major online retailers upon launch.

Fear not, Keurig stans: you’ll still be able to get your Starbucks K-Cups. The partnership with Nestlé won’t affect the Starbucks K-Cups you’ve come to know and love, at least from a consumer perspective. You'll just no longer have to try to cram a K-Cup into the smaller Nespresso machine (which is definitely not advised). According to Bloomberg, Starbucks and Nestlé have developed 24 new products; of those, 16 are capsules compatible with the Nespresso and Nescafé Dolce Gusto.

Last year’s announced partnership between the two corporate giants is a big deal. Like, a $7.15 billion dollar big deal. Per Bloomberg, Nestlé paid $7.15 billion for the rights to market and sell Starbucks products.

“This global coffee alliance with Nestlé is a significant strategic milestone for the growth of Starbucks," Kevin Johnson, president and CEO of Starbucks, said in a press release last year. “Bringing together the world’s leading coffee retailer, the world’s largest food and beverage company, and the world’s largest and fast-growing installed base of at-home and single-serve coffee machines helps us amplify the Starbucks brand around the world while delivering long-term value creation for our shareholders.”

What that basically means for you is that you are much less statistically likely to find yourself trapped in a situation where you don't have a Starbucks coffee option ever again — at least, when these pods drop in the coming months. Happy caffeinating!