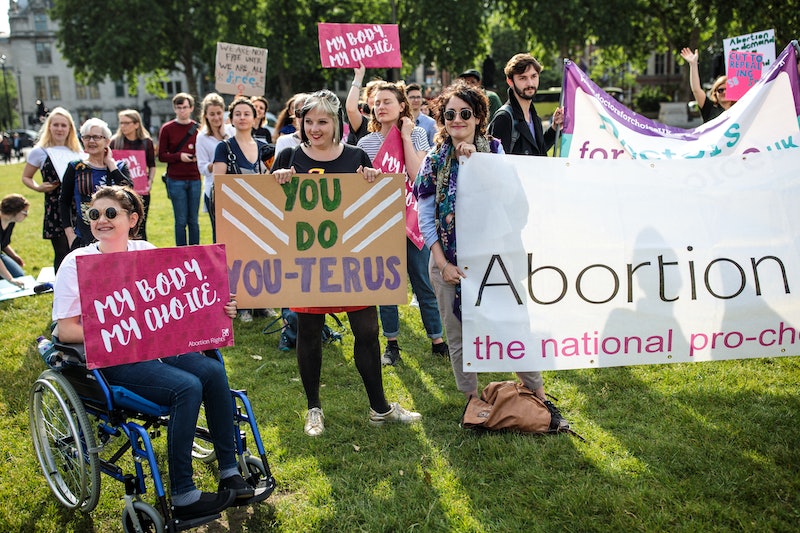 With Brett Kavanaugh confirmed to the Supreme Court, conservatives may have the votes to overturn or gut Roe v. Wade the next time the court takes up a case regarding abortion rights. Red state legislators are aware of this, and they've reportedly prepared: The Guttmacher Institute says that lawmakers in 17 states have prepared new abortion restrictions that they already plan on considering in the 2019 legislative session, according to VICE News. All of the states in question will be controlled by a Republican governor and Republican legislator in 2019.

Some of the bills seek not to directly overturn Roe v. Wade, VICE News reports, but to impose restrictions on abortion that aren't legal under the court's current interpretation of Roe. In Texas, for instance, a pre-filed bill for 2019, according to VICE News, states that "the right to life applies to an unborn child," and that the state will ban abortion "to the fullest extent authorized under federal constitutional law as interpreted by the United States Supreme Court."

In Kentucky, Missouri, and South Carolina, meanwhile, legislators have reportedly filed a bill for the 2019 session that will ban abortions after what they call a "fetal heartbeat" is detected, which can be as early as six weeks into a pregnancy. (As pro-choice activists often point out, the phrase "fetal heartbeat" is deceptive; it refers to the detection of cardiac activity in a millimeters-thick part of a fetus called the fetal pole, which bears little resemblance to a human heart).

“Like five, six years ago, you would see pre-files for ‘fetal personhood’ or some kind of abortion ban, and it just wasn’t something that rose to a large concern,” Elizabeth Nash, senior state issues manager for the Guttmacher Institute, told VICE News. “Now, they have traction. People are talking about them. People are organizing for and against them.”

In addition to the restrictions cited by VICE News, 16 states already have laws on the book that will automatically criminalize abortion if Roe v. Wade is knocked down or gutted, according to the Guttmacher Institute. These laws take a variety of forms: Four states have "trigger" laws which state stat abortion will be immediately banned if Roe is repealed; nine other states have pre-Roe abortion bans that, while currently unenforced, will become the law of the land if Roe goes down. Seven states have passed laws that, like the one under consideration in Texas, make abortion illegal to the maximum extent permitted by the Supreme Court.

Over the course of 2018, 13 states enacted 26 new restrictions on abortion and family planning, according to Guttmacher. On the whole, however, anti-abortion lawmakers were less successful in shifting policy in 2018 than they have been in recent years.

For instance, six fewer states implemented new abortion restrictions in 2018 than in 2017, according to Guttmacher. Moreover, 29 states enacted laws to expand access to family planning and promote reproductive health over the course of 2018 — far more than the number of states that opted to restrict it. Finally, fewer anti-abortion laws were adopted in 2018 than in any year of the last decade, the Guttmacher Institute reports.