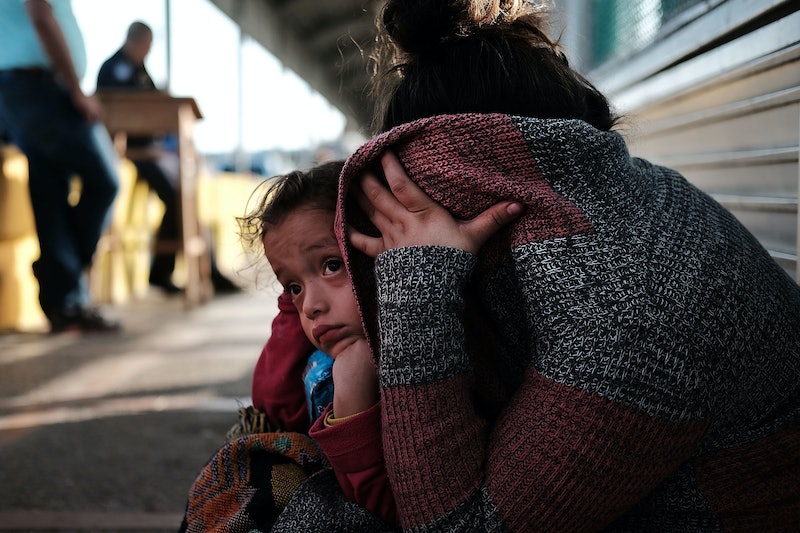 October 11 marks the sixth annual International Day of the Girl, created by the United Nations to shine a spotlight on women around the world. This year's theme is "empowering girls in crisis," and humanitarian organizations are focusing on young refugee women. The humanitarian organization CARE's new report, "Far From Home," shared exclusively with Bustle ahead of this year's International Day of the Girl, highlights the 13 worst refugee crises for girls.

Around 68.5 million people around the world, including 17 million girls, are currently living away from home within their nation's borders, or else living in a new country as refugees, according to the report. In Syria alone, more than three million girls are currently displaced as a result of that country's eight-year-long civil war. They are two and a half times more likely to be out of school, and child marriage among refugee children is on the rise.

In Yemen, there is no law that protects girls from child marriage. More than two-thirds of Yemeni girls are married before they turn 18, according to the report. Married children are especially vulnerable to domestic violence and sexually transmitted diseases. Complications from childbirth are the leading cause of death for 15- to 19-year-old girls in developing countries like Yemen.

Refugee women and girls also routinely face the threat of sexual violence. Everyday activities like walking to retrieve water or use the bathroom leave them vulnerable to attacks by men, and unaccompanied minors are even more vulnerable. In South Sudan, up to two-thirds of women and girls have endured physical or sexual violence, according to the report.

"What we find is, it is hardest to mobilize people's attention around what we call these slow-onset or longstanding conflicts," Nunn says. "I think it can lend itself to an unintentional apathy that really does diminish our capacity to invest and to ensure that we are stewarding and supporting individuals, these human beings, that are suffering through no fault of their own."

Last month, the Trump administration moved to cap the number of refugees that can be resettled in the United States in 2019 at 30,000 — a record low. That's down from this year's level of 45,000, and down from the 110,000 cap imposed during the Obama administration. The number of refugees resettled in the U.S. is often lower than the cap. During fiscal year 2018, which ended Sept. 30, the U.S. admitted fewer than 23,000 refugees, the second-lowest number allowed into the country in more than 40 years.

"We have the highest number of refugees since World War II," Nunn says. "The United States had already been taking a disproportionately low number. And you compare it to, for instance, our ally in Jordan: They have taken the equivalent of the U.S. taking and receiving all of Canada across our borders. And we are encouraging them to do so, and yet we are taking literally a handful in comparison."

More than 670,000 registered Syrian refugees are living in neighboring Jordan, and half of them are children. The Jordanian government puts the total number of Syrians displaced within Jordan's borders at 1.3 million. Jordan is roughly the size of Maine.

Nunn argues that the Trump administration's policy on refugees will damage America's relationship with its allies and will change the way America is viewed as a world leader.

"It creates a cascading effect when America turns its back on the most vulnerable," Nunn says.