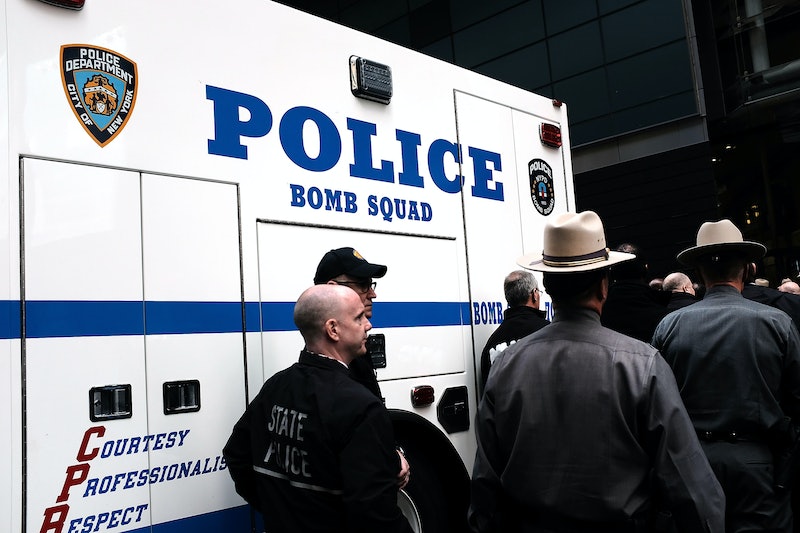 On Friday, police arrested a 56-year-old man suspected of mailing pipe bombs to prominent Democrats and liberals earlier in the week. Cesar Sayoc, a registered Republican living in Florida, faces five charges and a maximum of 48 years in prison for allegedly mailing explosives to prominent critics of President Trump. Thankfully, the mail bombings resulted in no fatalities — and that appears to be in line with what most statistics about domestic terrorism say.

An important disclaimer: The precise meaning of the word "terrorism" is the subject of perpetual debate, and that's because the term has no consistent legal definition — not even within the U.S. government. The Defense Department, the State Department, the PATRIOT Act, FEMA and the FBI all use different definitions of the word. The U.S. Code, supposedly the final word on all laws in America, offers different definitions of "terrorism" in different sections.

To avoid wading into the linguistic debate over what constitutes terrorism, some researchers use the term "violent extremists" or "extremist attacks." This article will use all of those terms interchangeably, as they're used to describe broadly similar activities.

With all of that out of the way, there's a wealth of data available from researchers and government agencies about domestic terrorism in the United States, and it sheds light on both long-term and short-term trends of extremist violence in America.

According to the Government Accountability Office, there have been 85 deadly domestic terrorist attacks in the United States between Sept. 11, 2001 and the end of 2016. Cumulatively, they've resulted in 225 deaths, or roughly 15 per year. By contrast, deer kill 130 people in the United States every year.

All available data shows that in the United States, right-wing terrorism is much deadlier than left-wing terrorism. It's not even close: An analysis at the right-leaning Cato Institute found that right-wing domestic terrorists have killed 10 times as many people as their left-wing counterparts since 1992. According to the Government Accountability Office, far-left extremist groups didn't kill anybody between 2001 and 2016, while far-right extremists claimed 106 victims during that same period.

Moreover, right-wing domestic terrorism has skyrocketed in recent years: According to the Anti-Defamation League, the share of domestic terrorism deaths attributable to right-wing extremists increased from 20 percent to 59 percent between 2001 and 2016. According to the Daily Beast, the apparent Twitter feed of the man suspected of mailing pipe bombs to Democrats is "littered with far-right conspiracy theories or violent threats aimed at some of President Trump’s most outspoken critics."

Thankfully, domestic terrorism on the whole has been falling in the United States since 2009, according to NATO, and is much less common in the 21st century than it was in the 1970s, according to the RAND Institute.

There's still a lot that remains unclear about U.S. domestic terrorism. Reliable data about failed or non-fatal domestic terrorist attacks is difficult to come by, for instance. Moreover, and the aforementioned ambiguity surrounding what constitutes "terrorism" makes even reliable data fair game for debate. Some have argued that the term "domestic terror" should be retired altogether.

Ultimately, though, one thing is clear: Although the prospect of being killed by a domestic terrorist is undoubtedly frightening, it's an exceedingly uncommon fate in America.