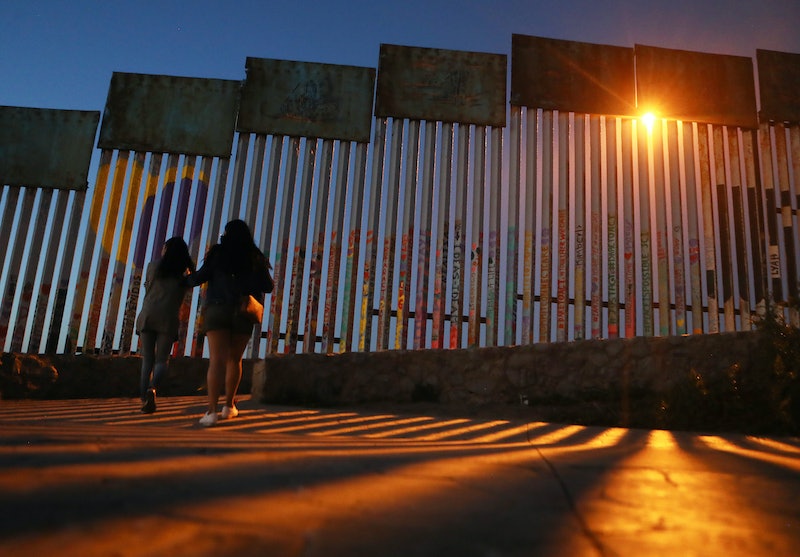 In an interview on CBS News' Face the Nation, President Donald Trump claimed that human traffickers are invading the United States and suggested his border wall could stop it. Trump's vivid descriptions of human trafficking along the U.S.-Mexico border have, more and more, become a regular part of his argument for a border wall. But human trafficking statistics poke holes in Trump's comments on the issue.

"This really is an invasion of our country by human traffickers," Trump told Face the Nation host Margaret Brennan in an interview set to air Sunday ahead of the Super Bowl. The president's remarks came as he discussed why he believed border security was a national emergency and why he believed his border wall was worth risking a second government shutdown. "These are people that are horrible people bringing in women mostly, but bringing in women and children into our country. Human trafficking."

President Trump has previously suggested that human traffickers have brought a flood of victims over unmanned and unwalled stretches of the U.S.-Mexico border. Last month, Trump repeatedly claimed that kidnapped women were tied up and bound with duct tape and then brought over the border in the backs of vehicles.

"They don't go through your port of entry," Trump said of human traffickers while announcing a temporary end to the government shutdown in late January. "They make a right turn going very quickly. They go into the desert areas or whatever areas you can look at and as soon as there's no protection they make a left or a right into the United States of America."

But immigration attorney Evangeline Chan, who serves as director of Safe Horizon's Immigration Law Project, told CNN that most foreign-born human trafficking victims enter the country after securing a job, and what they think will be a better life, through a recruiting agency.

"They come in through legal ports of entry," she said. 'But once they're here they realize that the employment that's offered and the conditions that they're working is very different than what was promised them." Chan said such victims are often threatened with deportation, physically harmed, or have their families threatened in an effort to keep them from escaping their situation.

So while the president paints a picture of human traffickers driving through the desert to invade the United States with bound and duct-taped women, actual human trafficking statistics tell a different story.

More like this
Matt Hancock’s TikTok Is The Most Matt Hancock Thing Ever
By Sam Ramsden
Eurovision Has Been Given A Whole New Look Ahead Of Its Liverpool Debut
By Bustle UK
How To Help Those Affected By The Turkey-Syria Earthquake
By El Hunt
8 Charities To Donate To During Black History Month
By Alexis Morillo
Get Even More From Bustle — Sign Up For The Newsletter
From hair trends to relationship advice, our daily newsletter has everything you need to sound like a person who’s on TikTok, even if you aren’t.