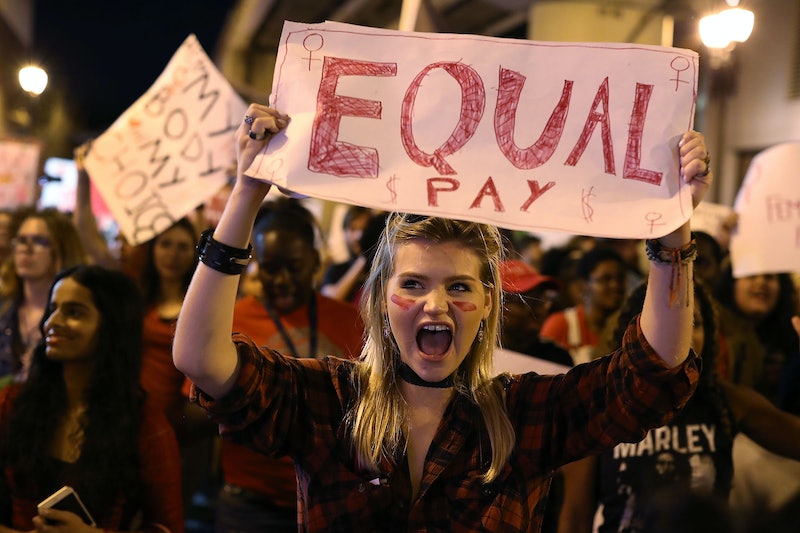 A study released on June 4 by the salary website, PayScale, suggests that the gender wage gap is very much alive and may have even gotten worse, CNBC reported on Tuesday. PayScale shared its statistics on women's peak earning potential, and found that they reach it some 11 years before men do. On top of that, the study noted that college-educated women earned $35,000 less than their male colleagues on average.

This gender pay gap — that is, the difference between the wages men and women earn for the same amount of work — may only deepen if things aren't fixed. "Our insights on when wages peak for men and women, broken down by occupation and racial/ethnic group, highlights how complex the gender pay gap is," PayScale's data analyst Teresa Perez wrote. "Unless policies are designed with all people in mind, pay gaps will not only persist, but can actually worsen."

Although the PayScale study reported that differences in peak earnings were observed in all professional fields studied, it was the highest in the world of legal professions, health care occupations, sales, and management positions. To demonstrate the imbalance, the study showed the percentage of point difference for each industry, which is the mathematical difference between two percentages.

According to CNBC, the salary website's research covers some three years. Methodology-wise, PayScale fielded responses from 1.4 million people from 22 major professional fields between 2016 and 2019.

Compared to its 2012 study, PayScale found that while peak earning ages for both women and men have gone up, so has the overall gap between their earnings. Based on its latest research, PayScale noted that it would take women an extra two years to reach the level of men's peak earnings. To be clear, the report specifically noted that the gender pay gap is "driven by many complex and related factors."

Additionally, based on those issues, the survey found that wages for women began to grow stagnant by the time they reached their late 20s. To explain this issue of wages slowing down, the study pointed to the possibility that starting a family could contribute to this pay gap. Time and again, researchers have pointed out how juggling family obligations fall disproportionately on the shoulders of women — and how that imbalance affects their pay.

In April, for example, The New York Times reported on how increasingly long hours at work end up affecting the wages of women who had started families more so than the men who did the same.

To improve matters, Perez wrote that insights gained from intersectional analyses — that is, studying how pay gap affects different racial, ethnic, class, and gender groups — could address the issue. Without it, Perez noted, the gender pay gap may only exacerbate.