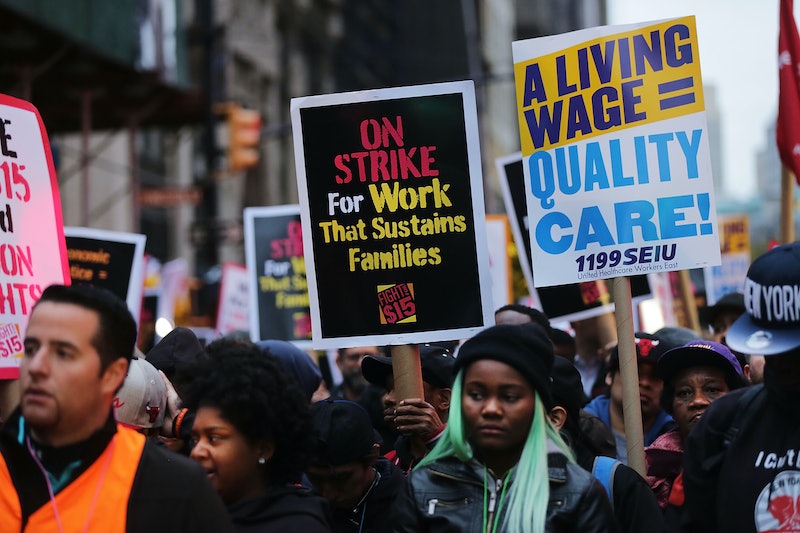 In a new study released this month, researchers at the University of California Berkeley examined statistics on young people and poverty, and noticed a startling trend: Young adults have been getting poorer over the last decade, and social welfare programs don't seem to be helping them much. It's only the most recent of several studies to show that young people are among the poorest groups of people in America. What's less clear, however, is why this is the case.

The study, which was carried out by researchers at the Institute for the Future of Young Americans at UC Berkeley's Goldman School of Public Policy, found that the share of Americans between the ages of 18 and 24 has risen over the last decade. It also found that in general, people in that age group face one of the highest levels of poverty when compared to any other demographic.

“Young adults have come of age during one of the worst recessions in U.S. history, without much of a social safety net to protect them,” Hawkins, associate director of the institute and the author of the brief, said in a press release. “Policymakers need to realize that young adults today largely have been left behind in the war on poverty.”

The report found that over the course of the last decade, around one in five young adults lived in poverty — the highest rate of any age group. The poverty rate was highest among 21-year-olds, 23.8% of whom were in poverty between 2009 and 2017. By contrast, between 1970 and 1973, less than 20% of 21-year-olds were living below the poverty line, according to the study.

The study also finds that young adults are one of the only demographics for whom poverty has increased since the early 1970s, as it's fallen for most other age groups. The poverty rate among 21-year-olds rose 4.9% between the early 1970s and the period between 2008 and 2015, according to the report. Meanwhile, among people 75 years old and older, the poverty rate dropped by 23.8 percent during that same period of time.

As the researchers noted in their report, this general trend of rising poverty among young adults holds even when the data is adjusted to account for university enrollment rate and the effect of government benefits on income. They also wrote that they "cannot attribute the jump in young adult poverty to increases in student loan balances or the general trend of increasing tuition costs," as their data controlled for that, and that "the spike in poverty among young adults is likely not driven by well-off college students who only appear to be in poverty in the data."

“Anti-poverty efforts have targeted the very young and the very old, bringing down rates of poverty for both,” Sarah Swanbeck, executive director of the institute, said in the university's press release. “But the social safety net largely misses young adults who are now experiencing among the highest rates of poverty for any age group in the U.S."