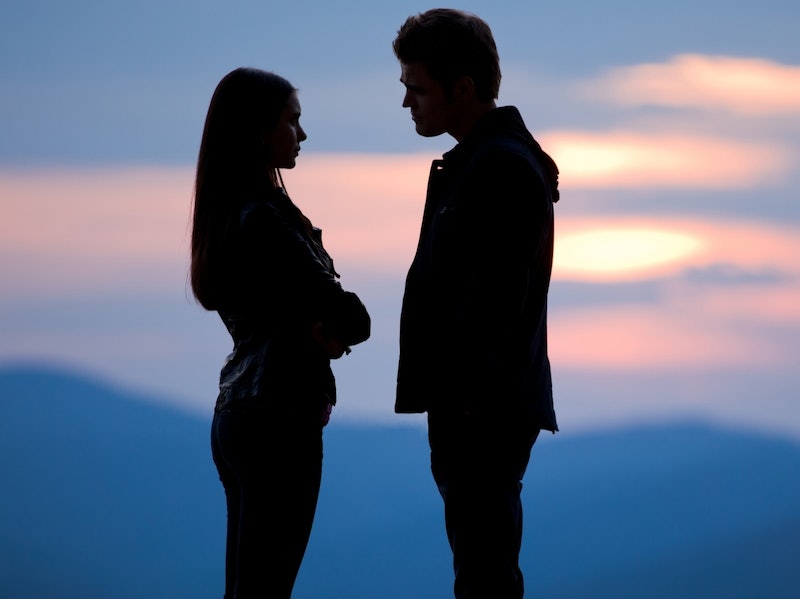 Stefan (Paul Wesley) ended up sacrificing his life to save his older brother Damon (Ian Somerhalder) after giving Damon the vampire cure. Stefan then shared an emotional goodbye with Elena (Nina Dobrev) in some kind of purgatory state before going on to find eternal peace with his BFF Lexi (Arielle Kebbel). Elena then woke up from her years of cursed sleep, reunited with Damon to go on to live a full, happy, human life married to Damon before finding peace of her own with her parents, Aunt Jenna (Sara Canning) and Uncle John (David Anders). The final shot of The CW's long-running drama showed Damon eventually finding peace of his own at the end of his human life ... with Stefan. But according to Williamson, that ending could have been very different.

"There were so many different ways to go," Williamson tells me over the phone after I finish rewatching the series finale for the fifth(!) time. "I remember originally when I was in the writers room picking the topic of the season, because I wrote the first episode with Julie [Plec] and we started discussing the season, everyone had all these great ideas. First there was this whole conversation on if Bonnie [Kat Graham] has to die in order for Elena to wake up. We were just really strong about how we do not want Bonnie to have to die in order for Elena to live. We did not want that martyr card played. If someone's going to be the martyr it has to be Damon or Stefan."

Bonnie ended up finally taking control of her witch powers in the finale, saving Mystic Falls and breaking the curse keeping Elena asleep without having to die in the process. Williamson was proud of Bonnie's eight-season-long journey from discovering her abilities back in the pilot to finally mastering them in the finale.

"We basically jumped to Bonnie's strong enough, she figured it out, she can wake Elena up. She jostled Elena in the beginning with her near-death experience and was able to do it again," Williamson says. "We were playing with the idea of the final button on Bonnie being a witch and she really came into her own from the very first episode. She didn't know how to deal with her powers, she was setting cars on fire at the car wash and she didn't quite have it down. We put a button on that: yes, she's finally figured it all out. From this moment forward, we know her powers are her powers and she owns them."

Once the writers nailed down Bonnie's story, they had to circle back around to who was going to die in the series finale, "I Was Feeling Epic."

"We were torn between Damon and Stefan," Williamson says, before confessing, "I'm a Stelena [fan]. I've gone on record as a Stelena [fan]. It's Stefan and Elena for me. That's who, in another universe, that's how I would have ended the show. However, we lost Elena in the sixth season."

Williamson then reveals in a shocking twist that initially he wanted to get Dobrev back for the entire final season, not just the last episode. Had she been able to return for all 16 episodes of Season 8, that would have changed the ending dramatically.

"There was a conversation of getting her back for an entire season," he says. "If we'd had her back for all of the eighth season, we could have worked our way back there [to Stefan and Elena]. And I would have loved to explore that. But we didn't. Her movie schedule didn't permit it. We only had one episode. That was tough. So there was some choice to be made."

When it came to choosing who Elena would end up with, "it had to be Damon," Williamson says. "Where we left our storyline, she was with Damon when she left. And so there was no other way to circle back around to Stefan."

So that explains why Elena ended up living happily ever after with Damon, but why did Stefan have to be the one to die in the finale?

"The writers and everyone felt like Stefan, after everyone he had killed, he was our hero but as a ripper he had killed and harmed so many people over his life, turned his own brother into a vampire," Williamson says. "If anyone was going to make that right, it should be Stefan."

But Stefan almost had a last-minute reprieve from his fiery death, sacrificing his life to kill Katherine (also Dobrev) just as Bonnie diverted the hellfire away from Mystic Falls and used it to destroy hell and Katherine once and for all.

"There was a conversation on the table where Stefan and Caroline [Candice King] were going to leave Mystic Falls and take off together and find special, gifted children and bring them to the school and take care of them," Williamson reveals. "That would be his living amends. But for all the harm and death Stefan has caused, I was like, 'Really?' I don't really see Stefan as being a nun. If Stefan was really going to make things right, he should die for his brother. He should give his brother what his brother really wants, which is a human life and humanity and the woman that he loves."

He pauses, then continues, "If there was any other conversations, we ended on this one. This show was always about Stefan being the hero, and if Stefan could not have Elena, Stefan could do this very nice thing of giving his brother the chance to live with Elena."

But despite how many different plot changes the series finale went through, Williamson is proud of how the episode retained the same basic idea.

"We played around with killing a lot of people and the idea of killing both Damon and Stefan, them going out together," he says. "We just decided collectively, and settled on this. The spirit of our original ending is still intact from day one. Just the plot is different. We always intended to end our series on the two brothers and we did."

He then adds with a worried laugh, "I hope the Stelena fans understand, because I'm worried about them!"

At least Stelena fans can take heart in knowing that even if their desired relationship didn't get the happy ending they wanted, their fandom still has Williamson as their biggest supporter.