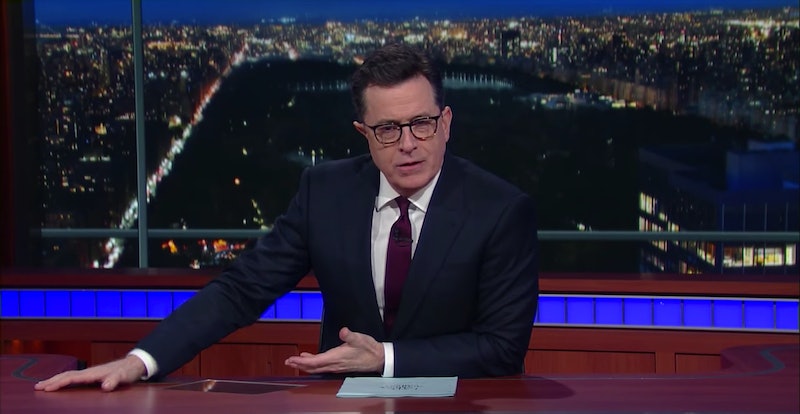 If you haven't heard about the Bowling Green Massacre, it's probably because you've been staying off the internet for the past few days. Or, you know, because it didn't happen, no matter what Kellyanne Conway said on MSNBC. Comedian Stephen Colbert's take on the Bowling Green Massacre perfectly skewered both Conway's and President Donald Trump's latest spiels about inadequate media coverage of terror attacks.

Colbert tackled the issue on the Feb. 6 episode of The Late Show after seeing Trump address U.S. Central Command in Florida. "Radical Islamic terrorists are determined to strike our homeland," Trump said, defending his travel ban on seven majority-Muslim countries. "It's gotten to a point where it's not even being reported. And in many cases, the very, very dishonest press doesn't want to report it."

"It makes perfect sense," Colbert quipped in response. "You know the old news adage; 'if it bleeds, don't talk about it.'" He added that he wasn't going to talk about the Bowling Green Massacre, but that Trump had actually given him a reason to. Conway had earlier referenced the so-called massacre during an interview on MSNBC on Feb. 2, claiming that two Iraqis who were radicalized Muslims were the masterminds behind the Bowling Green Massacre, which incidentally wasn't covered by the media.

"Yes, it didn't get covered, on the flimsy excuse that there was no Bowling Green Massacre," Colbert said sarcastically. He went on to imitate Conway's confusing manner of speaking, adding, "But I think we all remember where we weren't were when we didn't hear that nothing happened."

Conway later said she misspoke, and called the episode an "honest mistake" on Twitter. But, as Colbert pointed out, she had mentioned the "massacre" to both TMZ and Cosmopolitan, and the odds that she misspoke in the same way three times aren't that high. But Colbert decided to give Conway a chance anyway. "It could be more media bias," he explained. "I say they need to present both sides of the story — the things that did happen, and the things that didn't happen."

Colbert successfully used sarcasm to take on the "alternative facts" narrative Conway has popularized. After all, facts are supposed to be objective; you can't make something up just because there's no evidence to back up your argument and expect to remain credible. If Trump and Conway can't find legitimate facts that suggest the travel ban actually contributes to American safety, then maybe Trump shouldn't have signed the executive order in the first place.

The Late Show host, a self-described "Bowling Green Truth-er," made a "sacred promise" to his audience: "we will have more on this story as it doesn't develop." Well, with the way things are going for Trump's surrogates, I'm sure he will.