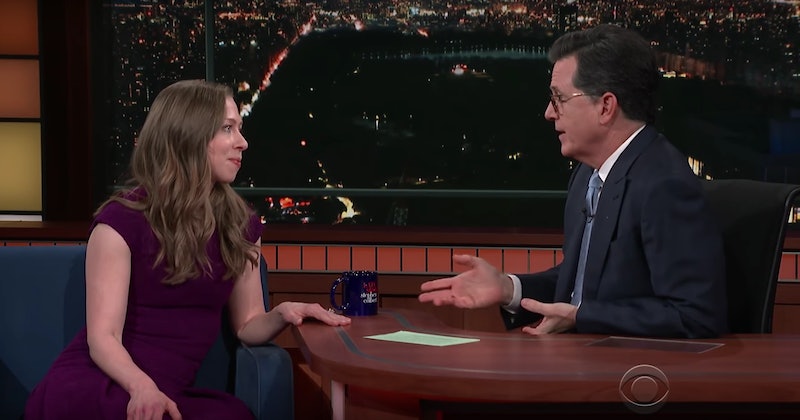 The Late Show with Stephen Colbert/YouTube

On Monday's episode of the Late Show with Stephen Colbert, the host asked Chelsea Clinton about Ivanka Trump and whether or not the two are still friends today. It's a question that holds a lot of weight, especially with Donald Trump as president. And who doesn't want to know more about the relationship between two of the biggest political rivals' daughters? Chelsea didn't shy away from the question about Ivanka though — she cut straight to the chase.

In response to Colbert, the former first daughter noted that her friendship with the current first daughter has diminished since President Trump took office, particularly because the president and his administration have supported policies with which Chelsea does not agree. Colbert asked Chelsea about her relationship with Ivanka about halfway through their interview. Colbert began discussing Ivanka's role in her father's administration and pointedly asked Chelsea, "Are you guys still friends?" In so many words, the author essentially implied the answer is no.

... I have not spoken to her in a long time ... it's clear that she has supported policies and decisions that I don't agree with. I've been very vocal about my opposition to President Trump ...

Colbert then joked, "Could you call her up and say, hey, maybe no war with North Korea or anything like that? I mean, you are friends ..."

Chelsea responded by expressing lament for the current state of affairs in the United States, gently segueing into a broader topic.

Earlier in the interview, Colbert also asked Chelsea whether or not she believes it is fair to criticize Ivanka, since she is the president's daughter.

Colbert went on to ask if Ivanka is "fair game for criticism or if she's just another presidential child." Chelsea expressed that as a member of her father's administration, Ivanka has a responsibility to the American people.

The former first daughter believes that she has a strong responsibility to advocate for women and against policies spearheaded by the Trump administration. In that sense, it's clear that Ivanka's and Chelsea's policy beliefs have perhaps grown irreconcilably far apart.

Indeed, Chelsea eloquently described her goals for advocacy work during the Trump administration to Colbert. According to her, she and her parents are now focusing on determining, "What should we be doing today, which organizations and candidates should we be supporting. How do we both stand in opposition to the degradation of norms and institutions as well as the retrograde policies around voting rights, around women's rights ... " Ultimately, she wants to make this country better for future generations — and Ivanka might not fit into that plan.