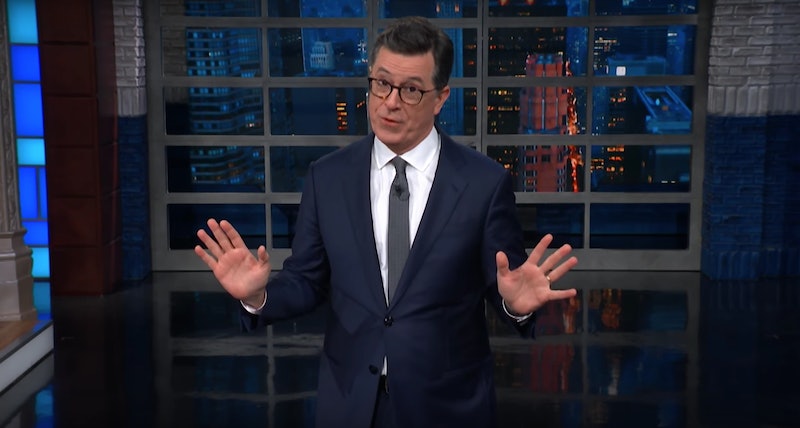 The Late Show with Stephen Colbert/YouTube

During a monologue on his late night television show, Stephen Colbert mocked Donald Trump's climate change remarks for being simply "not how knowledge works." The host was referencing comments that Trump made during an Associated Press conference earlier in the week, when he claimed he had a "natural instinct for science," and that there are "scientists on both sides" of the climate change argument. Colbert was fully, unequivocally not here for those comments.

During the AP interview, Trump said, "My uncle was a great professor at MIT for many years. Dr. John Trump. And I didn’t talk to him about this particular subject, but I have a natural instinct for science, and I will say that you have scientists on both sides of the picture."

And on his show on Wednesday night, Colbert called Trump out in a big way for it.

After a year of storms causing untold damage, and our glaciers just shrinking in every direction, Trump was still ambivalent about the concept of climate change ... [and] it is true, there are scientists on both sides. On one side, all the scientists. On the other side, one guy who runs a blog called realtrueamericanscienceeagle.jesus, 'Forecast: Rapture!'

Colbert continued, "You have a 'natural instinct for science'? That's not how knowledge works. You don't inherit it from your uncle."

This isn't the first time Trump's comments on climate change have leaned toward mild to severe skepticism regarding global warming. To be fair, Trump is technically right: There are still, even in 2018, scientists on either side of the global warming debate. Approximately 80 percent of scientists agree with the theory of anthropogenic climate change, per an analysis of multiple studies on climate change consensus by Professor Earl J. Richie of the University of Houston.

What's more, this isn't the first time that Trump has voiced skepticism on the topic. During a 60 Minutes interview conducted last week, when asked if he believed climate change was a hoax, Trump said, "I think something's happening. Something's changing and it'll change back again. I don't think it's a hoax."

Colbert isn't the only late-night television host to have noticed Trump's comments and been bothered by them. Jimmy Kimmel spoke out about Trump's remarks, as well, saying on Tuesday, “Maybe the most destructive thing these people are up to involves climate change."

He continued, "Not only won’t Trump address this, he keeps rolling back regulations that were designed to slow it down. And this is bigly important, so somebody needs to get through to the president before it’s too late.”

For now, the efforts to slow climate change are going to be undertaken by global leaders without Trump. Several international leaders (including Ban Ki-moon, Bill Gates, and Kristalina Georgieva, CEO of the World Bank) have recently moved to establish the Global Commission on Adaption, a 17-country effort to cut carbon emissions and rebuild a global commitment to take on climate change.

Ban, a former U.N. secretary, said to the Guardian about the Commission, "We were very much united until December 2015 in Paris. Now unfortunately the level of solidarity is being loosened, especially by the Trump administration."

He added, "Climate change is happening much, much faster than one may think. [But] where there is political will, anything can be done.”

More like this
'Waterloo Road' Is Back, With More Than A Few Familiar Faces
By Sam Ramsden and Vivian Iroanya
Matt Hancock Broke a Major Rule With I’m A Celeb
By El Hunt
What To Know About Martin Bashir After Watching 'The Crown'
By Bustle UK
'Bridgerton' S3 Teases Exciting Social Season For Penelope Featherington
By Bustle
Get Even More From Bustle — Sign Up For The Newsletter