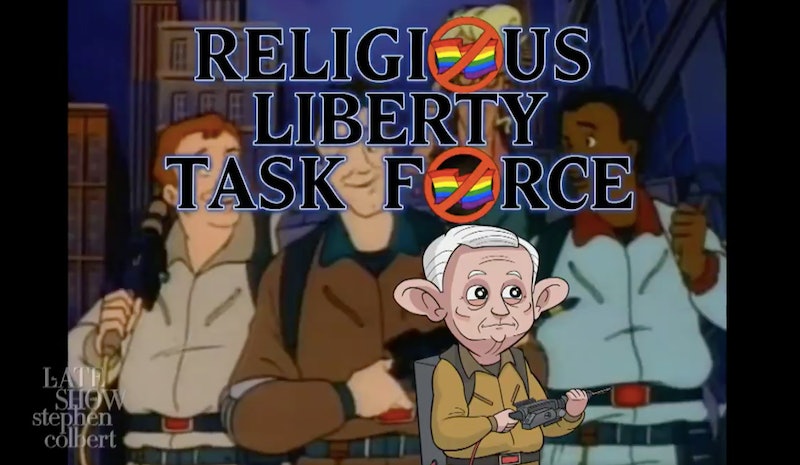 The Late Show With Stephen Colbert
By Angela Chen
Aug. 1, 2018

As soon as Attorney General Jeff Sessions' newest religious effort was announced, it instantly became fodder for comedians. After the 71-year-old Trump official declared he was putting together a task force to battle the cultural and political threat to religious freedom, The Late Show with Stephen Colbert reimagined the "Religious Liberty Task Force" as Ghostbusters in a cartoon that lampooned the concept.

During the Justice Department’s Religious Liberty Summit, Sessions outlined the purpose of this new task force. The attorney general said it would instill and enforce legal guidance the Department of Justice had already provided on the best approach in applying religious liberty protections toward federal law, according to NBC News. He characterized the United States as a nation that was suffering in a "changing cultural climate," with religious people of all faiths under fire from the federal government.

“A dangerous movement, undetected by many, is now challenging and eroding our great tradition of religious freedom,” Sessions said on Monday, according to Deadline. “There can be no doubt. This is no little matter. It must be confronted and defeated.”

Sessions' heightened, evil-versus-good language led to Colbert's interpretation of the task force. Rewriting the lyrics to the Ghostbusters song while setting it to actual scenes from the '80s classic Real Ghostbusters animated series, The Late Show reimagines the phantom chasers as the “Religious Liberty Task Force,” a group that takes down those who go against the conservative Christian agenda.

Sessions points to religious oppression during his summit speech, saying nuns were forced to buy contraceptives and that the Supreme Court was right for ruling in favor of the Christian baker who refused to make a cake for a same-sex wedding. The Late Show satirizes these points, starting the song off with, "There's a gay cake in your neighborhood, who you gonna call? Religious Liberty Task Force!" And instead of the familiar "I ain't afraid of no ghosts!" throughout, Colbert's version has “I ain’t afraid of no gays!” sprinkled in between verses.

The cartoon also pits the task force against non-Christians (including Jewish and Muslim people) and people of color, characterizing them as the "bad guys" that the task force has to confront.

"This task force's agenda isn’t consistent with religious freedom. Religious freedom protects our right to our beliefs, not a right to discriminate or harm others," Louise Melling, a deputy legal director with the American Civil Liberties Union, said to NBC News in a statement. "Jeff Sessions' Department of Justice is again turning that understanding of religious freedom on its head."

According to The Hill, there are 20 fundamental principles that the task force must follow. And that, per Sessions' rhetoric, includes the principles that free exercise means not only the freedom to worship — but the right to exercise faith.

"The Constitution’s protections don’t end at the parish parking lot nor can our freedoms be confined to our basements,” Sessions said, according to The Hill, adding that the Trump administration will not just react to situations but is actively making sure to accommodate people of faith.

Though the language of Sessions' task force announcement seems to be applicable to all faiths, Colbert's Ghostbusters lyrics cut through what many perceive to be fluff. His interpretation gets to the heart of what lots of marginalized groups may fear: that the task force might protect some religions more than others.