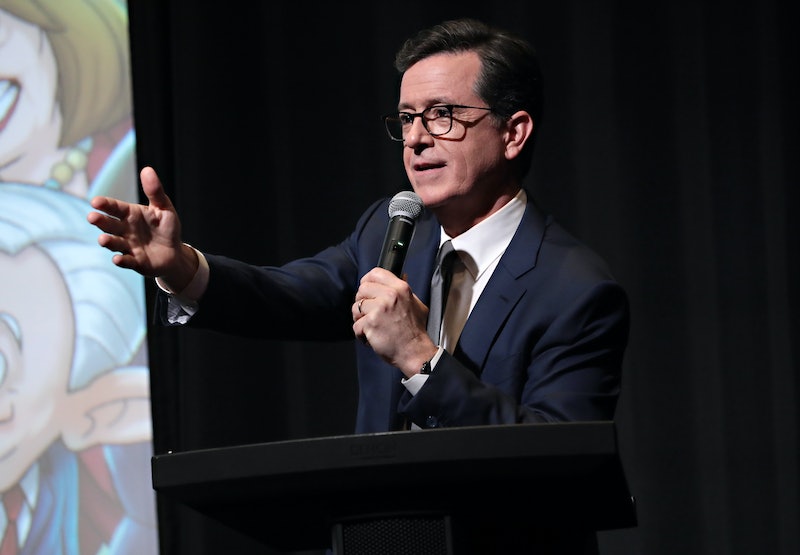 At a rally on Wednesday, Donald Trump, a president who has repeatedly mocked political adversaries with diminutive nicknames and demeaned women for their appearances, accused the media of being uncivil. Surely wondering whether Trump understood the meaning of the word, Stephen Colbert used quotes from Trump's Wisconsin rally to teach his own lesson in civility on Thursday night.

The Late Show host began a segment called "Ah, Civility" by saying, "After yesterday’s bombs were discovered, Donald Trump held a rally in Wisconsin, and he had a simple message." Colbert then cut to a clip from the rally, where Trump said, "Those engaged in the political arena must stop treating political opponents as being morally defective."

"So you’re deleting your Twitter account?" Colbert quipped, as the audience cheered. "Is that what he means?" He continued, pointing out that Trump kept reminding his crowd "how civil he was being."

"Do you see how nice I’m behaving tonight?" the president said in a clip, looking at the crowd almost as if it were a surprise. "Have you ever seen this?"

"Yes," Colbert responded emphatically. "I used to see presidents do it all the time before we elected a guy who was more afraid of Jake Tapper than Kim Jong Un."

The civility debate has been a frequent point of controversy during the Trump presidency. In recent months, it's come up as Republican politicians have been protested or denied service at restaurants. In response to those incidents, many Republicans have called for the return of "civility" to politics, often calling Democrats an "angry mob."

Alan Dershowitz, a legal scholar who has frequently defended Trump, wrote in an opinion piece, "these rude extremists are a symptom of the times," adding that he was no longer welcome among his liberal friends who spend time on Martha's Vineyard. "The divisions have gotten so bad that many on both sides refuse to speak or listen to those on the other side."

Democrats on the other hand, argue that the right is being hypocritical, pointing to the administration's family separation policy and the president's many inflammatory actions, among other things, as evidence that "civility" in the Republican sense means passivity and preservation of the status quo. Rep. Maxine Waters, who said she has "no sympathy" for Republicans who have been publicly shamed, encouraged Democrats to continue protesting Trump officials as a demonstration of resistance. And earlier this month, Hillary Clinton argued, "You cannot be civil with a political party that wants to destroy what you stand for."

Despite the fact that Clinton was among those to receive a package containing a pipe bomb on Wednesday, Trump supporters still chanted the familiar "lock her up" refrain ahead of the president's arrival. In fact, during that same rally, after decrying the "endless hostility" and "false attacks" of the media, Trump went on to claim that Democrats are "openly encouraging caravan after caravan of illegal aliens to violate our laws and to break into our country," a statement that has been debunked as false.