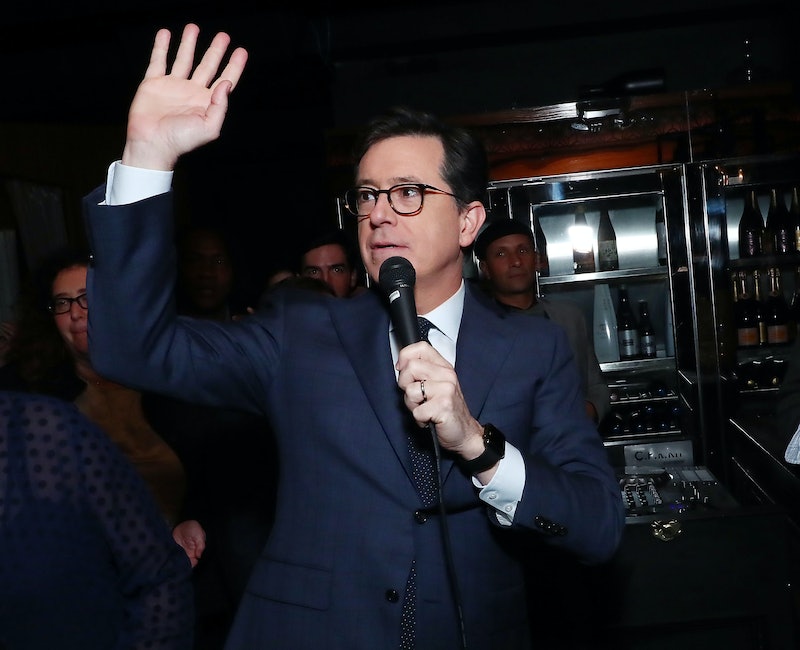 It's award season for movies and the Oscars are just around the corner, but it's never too soon to look ahead to TV's biggest night. Stephen Colbert will host the 2017 Emmy Awards, CBS announced on Monday, and it'll be the The Late Show host's first time hosting an awards show. Colbert will stage the stage the Microsoft Theater in Los Angeles at the Sept. 17 awards ceremony to honor the best in television. In a statement released by CBS, the comedian's comments playfully referenced President Donald Trump's remarks about the attendance at last week's inauguration. “This will be the largest audience to witness an Emmys, period,” Colbert said in the statement. “Both in person and around the globe.”

Although Colbert has never acted as master of ceremonies of an awards show, he has plenty of experience as a host. In addition to hosting CBS' The Late Show, the comedian has also hosted The Kennedy Center Honors, The Colbert Report, and Showtime's Stephen Colbert’s Live Election Night Democracy’s Series Finale. Colbert himself has won nine Emmy Awards for his work on The Daily Show and The Colbert Report. "We are thrilled that Stephen Colbert will be bringing his Emmy-winning comedic talent to hosting this year’s Emmy Awards,' Television Academy chairman and CEO Hayma Washington said in the statement. "He's a formidable showman and we are delighted to begin working with him and the entire CBS team.”

Colbert's newest hosting gig follows a current trend of the TV networks, Variety pointed out — CBS tapped one of their late-night talk show hosts for the Emmys hosting job, just like ABC and NBC did for their respective years airing the Emmys. Jimmy Kimmel hosted the show last year when it aired on ABC and Late Night host Seth Meyers had the gig when the Emmys aired on NBC in 2014.

But TV fans will have to wait until September to see if Colbert will also be an awards show host with the most.