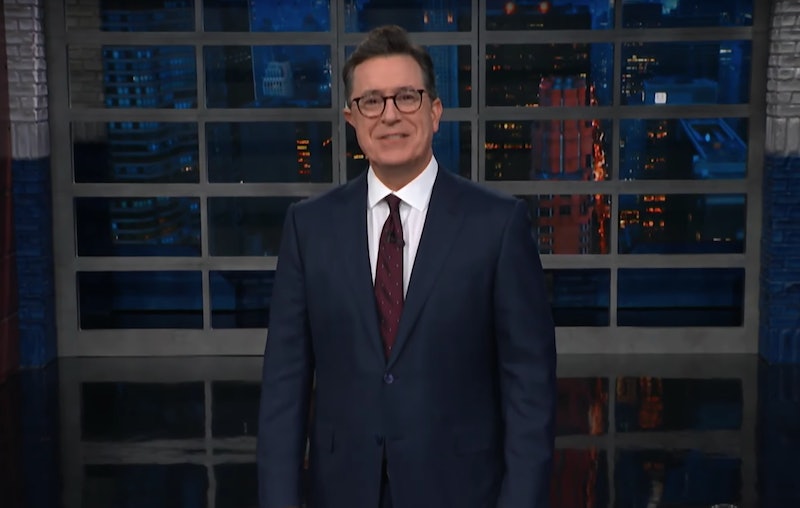 Late Show With Stephen Colbert
By Madhuri Sathish-Van Atta
May 17, 2018

It has been one year since Special Counsel Robert Mueller was put in charge of investigating the Trump campaign's possible ties to Russia, and Stephen Colbert commemorated the occasion Wednesday night with a rather unorthodox birthday wish. Colbert wished Mueller's Russia probe a happy birthday by reminding his viewers that the "first anniversary is traditionally the paper anniversary, and with any luck, that is what Mueller is going to be serving Donald Trump with."

Colbert told the audience that he could barely contain his excitement about the special occasion. He also joked about the impaneling of a grand jury in Washington, suggesting that a group of Trump's peers would have to consist of "Sean Hannity, the cast of Shark Tank and a cheeseburger."

Colbert also highlighted an article in The Washington Post that described Trump's reactions to Mueller's investigation. Colbert pointed to a statement by Christopher Ruddy, a friend of the president who told the Post that Trump has been "so emotional ... and the way he deals with it is to lash out.” Colbert was not amused by Ruddy's comments, remarking that a man with that much power should not be lashing out when he's upset.

"Yes, yes, reassuring words about the man with the nuclear launch codes," Colbert quipped. "Sleep tight, honey, everything's going to be okay as long as nothing upsets Donald Trump."

But the article in the Post didn't stop there, and neither did Colbert. Another extract that Colbert chose to highlight indicated that Trump wanted better "TV lawyers" to defend him on cable news during the ongoing investigation.

"And who does Trump think is a TV lawyer upgrade?" Colbert asked. "Former New York Mayor Rudy Giuliani," who told the Post that he and Trump are "on the same wavelength."

"Yes," Colbert added. "They're so close, it's like they finish each other's prison sentences."

Colbert concluded his close reading of the Post article by poking fun at the phrase "buckle up," which is what one White House staffer said the administration would have to do in order to get through the Mueller investigation. Administration officials will indeed have to "buckle up" as the Russia probe enters its second year, Colbert conceded — but the experience will feel something like being buckled up in a car that has gone flying off a cliff.

But even as Trump grows increasingly frustrated with Mueller's investigation — which he describes as a "witch hunt" — Colbert noted that some people in his administration have already turned toward the future. According to Axios, Trump's campaign aides are "quietly launching his reelection campaign," a piece of information that left Colbert bemused. Even as the crowd booed Trump's reelection efforts, Colbert explained what was bothering him.

"But why would you launch it quietly?" Colbert asked. "Don't you want people to know? That's like quietly launching a search party."

Colbert subsequently made the reelection campaign launch a little less quiet by bringing attention to Trump's new campaign manager, Brad Parscale. Parscale was the digital director for Trump's presidential campaign back in 2016. According to Axios, the Trump team recruited Parscale to be the 2020 campaign manager because they had "great success recruiting Trump supporters with ads on AOL (an older, Trump-friendly demographic)."

The audience was already laughing when Colbert proceeded to do a decent dial-up imitation; he suggested that it was what Trump's new campaign sounded like. For about 15 seconds, Colbert attempted to imitate a dial-up modem, and tacked on a "for America" for the end to make it seem like a more realistic campaign slogan. Between his comments about a "paper anniversary" and his jabs at Trump's reelection campaign, Colbert certainly knows how to wish someone — or in this case, someone's investigation — a happy birthday.

More like this
A Political Thriller Inspired By The Munich Massacre Is Coming Soon
By Darshita Goyal
A 'Schitt's Creek' Star Just Signed On For 'Sex Education' Season 4
By Bustle UK
Courteney Cox Doesn't Remember Filming 'Friends'
By Jordyn Tilchen and Sam Ramsden
Which Cast Member of 'Westworld' Season 4 Has the Highest Net Worth?
By Meg Walters
Get Even More From Bustle — Sign Up For The Newsletter