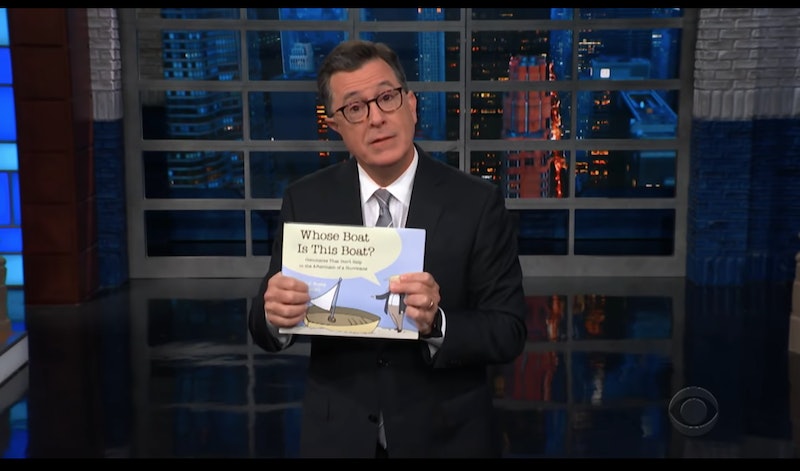 The Late Show with Stephen Colbert/CBS
By Sarah Friedmann
Oct. 2, 2018

On Friday's episode of The Late Show with Stephen Colbert, the host announced that a new Trump-inspired children's book will soon be available for sale nationwide. Stephen Colbert's book, Whose Boat is This Boat? Comments That Don’t Help in the Aftermath of a Hurricane, is inspired by the president's often-maligned comments in the wake of hurricane disasters.

As Colbert told the audience during his show, the new publication is a compilation of quotes Trump has said while touring locations in the United States that have been damaged by hurricanes. In particular, Colbert asserted that the title of the book was inspired by Trump's somewhat bizarre comments about a boat that had washed up on a homeowner's lawn in North Carolina following Hurricane Florence. As The Hill described, Trump said to the man at the time, "At least you got a nice boat out of the deal."

Colbert referenced this interaction when describing the development of the book, saying:

You might recall that Donald Trump’s visit to North Carolina after the hurricane did not comfort everyone. ... He had an impassioned and truly heartfelt response to this one boat that washed ashore. ... He made so many kind of odd comments about that boat that as a joke — ha, ha — we turned all of those comments into a children’s book, made up entirely of quotes of Trump touring hurricane damage.

The late-night host also indicated that all proceeds The Late Show makes from the book will go to a host of hurricane relief organizations, including the Foundation for the Carolinas, the One SC Fund, the North Carolina Disaster Relief Fund, and the World Central Kitchen. The Carolinas suffered significant damage as a result of the mid-September storm, with many cities facing extensive flooding and widespread infrastructure damage.

Colbert characterized his children's book as a way for Trump to inadvertently assist in post-storm recovery through the funds the publication will raise. As the late-night host put it, "This way Donald Trump's comments about that boat are helping, in spite of him."

In addition to Trump's comments about the boat, the president has also been criticized for his seemingly overly straightforward characterization of Hurricane Florence. For example, in a video he released on Twitter on Sept. 19, Trump offered somewhat strange commentary about the storm, saying, “This is a tough hurricane ... one of the wettest we’ve ever seen from the standpoint of water. Rarely have we had an experience like it and it's certainly not good."

Colbert told audiences that Whose Boat is This Boat? is slated to be released on Nov. 6 — Election Day — and will be published by Simon & Schuster. Those who wish to pre-order the book can already do so via The Late Show's website. The host closed out his segment by encouraging audience members to purchase multiple copies of his book and to give them to others, joking, "It's the perfect gift for young readers and presidents who don't read."

More like this
Yes, You Can Stream Machine Gun Kelly’s Life In Pink In The UK
By Rachel Mantock
Police Shove 'Full House' Star Jodie Sweetin At An Abortion Rights Protest
By Radhika Menon
Disney+ Has a Nature Docuseries Narrated By Michael B. Jordan
By BDG Studios
Lauren Rae Is Bringing Back The Sex And The City Vibes In Her New Memoir
By Shahed Ezaydi
Get Even More From Bustle — Sign Up For The Newsletter