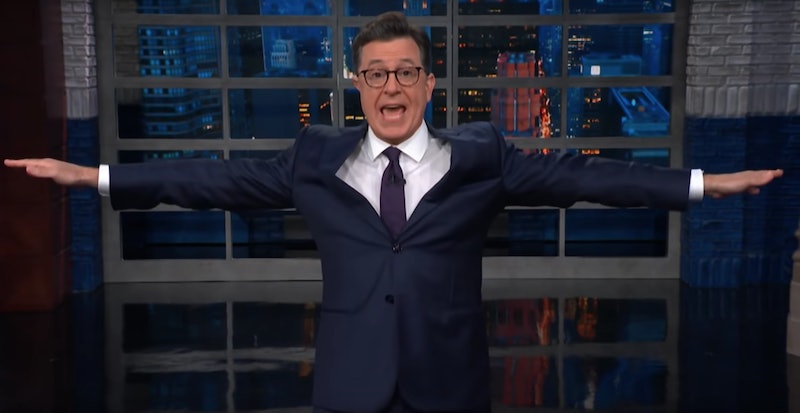 Stephen Colbert entered the fray Monday night of the migrant family separation debate, criticizing the president and the administration's new "zero tolerance" policy that has seen thousands of children taken from their parents after they cross the border with Mexico into the United States. On The Late Show, the jokes were painfully funny for such a somber topic. Colbert's segment about Trump's immigrant family separation response went over the president's tweets on the matter and tore them apart.

First, Colbert read what Trump had tweeted last week. "The Democrats are forcing the breakup of families at the Border with their horrible and cruel legislative agenda," Colbert read in his voice imitating Trump. "Any Immigration Bill MUST HAVE full funding for the Wall, end Catch & Release, Visa Lottery and Chain, and go to Merit Based Immigration. Go for it! WIN!"

What does that mean?" Colbert asked after, back in his normal voice. Then he went on to pretend to be Trump again, or a cheerleader version of the president. He faked a cheer routine and said in his Trump voice:

Colbert then went on to point out two things he saw as "wrong" with Trump's tweet. One, if there were a law requiring this, Republicans control all branches of government and could just change it if they wanted. Two, Colbert said it's not a law. "It's just another scoop from your chum bucket of cruelty," Colbert told the audience.

Colbert also joked about Trump's speech at the National Space Council. "The United States will not be a migrant camp, and it will not be a refugee holding facility," Trump said during his speech.

"No, it'll be the all-baby reboot of The Shawshank Redemption," Colbert joked.

Then Colbert switched gears to other members of the administration. "Some [members of his administration] say the policy doesn't even exist,” he said, "like Secretary of Homeland Security and Definitely-Not-the-Descendant-of-Immigrants Kirstjen Nielsen, who tweeted yesterday, 'We do not have a policy of separating families at the border. Period.'"

"Then why are you locking up kids in an abandoned Walmart?!" Colbert asked.

Nielsen also said on Monday, "We do not have the luxury of pretending that all individuals coming to this country as a family unit are, in fact, a family."

Responded Colbert: "Yes, who can tell if these weeping toddlers are part of a family? They might not even be toddlers. They might be adults with shoes on their knees!"

Next to be targeted was White House adviser Stephen Miller. Colbert read a quote from Miller, who called the separations "a potent tool … for stopping migrants from flooding across the border."

"Which is fitting because I’ve always thought of Stephen Miller as a potent tool," Colbert joked, going on to say he misspoke and meant to say "impotent tool."

Fox & Friends came next. Colbert played clips from their morning show and host Steve Doocy saying that the "cages" where children are being held to him are "more like a security pen."

Colbert wrapped up the segment with a new mini segment called "The Devil's Advocate," where Colbert dons horns and special effects make his face look red. Colbert, as the devil, said:

Hello, Lucifer here. You know, imprisoning children has been getting a lot of bad press recently, but prison, is that really the worst place for kids? I mean, have you been to a Chuck E. Cheese?

Colbert didn't let Trump or his administration off the hook, and as you can see, it was painfully funny.