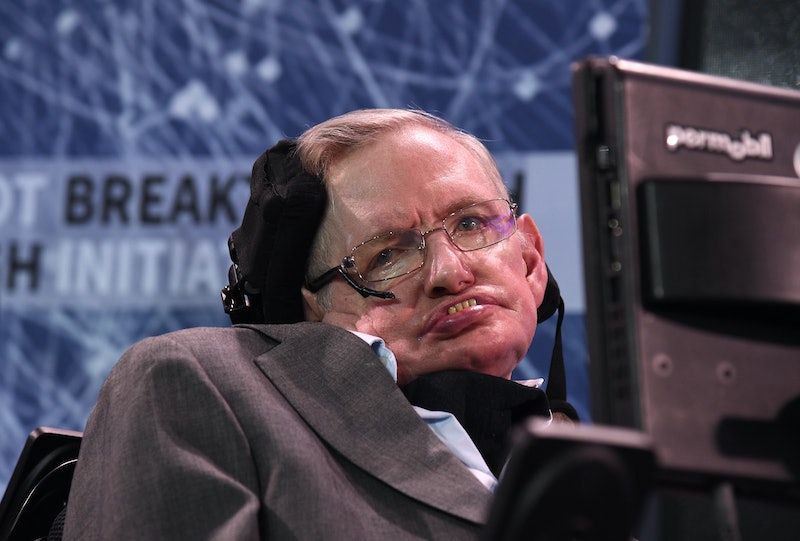 On Tuesday evening, a spokesperson for the Hawking family revealed that renowned scientist Stephen Hawking has passed away at the age of 76. BBC News reported that his children, Lucy, Robert and Tim, said in a statement: "We are deeply saddened that our beloved father passed away today. He was a great scientist and an extraordinary man whose work and legacy will live on for many years."

Hawking was born in 1942 in Oxford, England. He attended Oxford University, where he studied natural science, and received his Ph.D. from Cambridge University. He served as the Lucasian Professor of Mathematics at the University of Cambridge for 30 years and then, afterwards, became the Director of Research at Cambridge's Department of Applied Mathematics and Theoretical Physics. Hawking has been awarded more than a dozen honorary academic degrees throughout his career.

Hawking had an enormous impact across various scientific fields, with CNN describing him as a "cosmologist, astronomer, [and] mathematician." He also was the author of A Brief History of Time, a best-selling book on the development of the universe, first published in 1988. The book was one of Hawking's many publications.

Throughout much of his adult life, Hawking battled amyotrophic lateral sclerosis (ALS), a neurodegenerative disease that eventually left him almost completely paralyzed; when he was initially diagnosed at the age of 21, doctors had given him about two years to live. However, Hawking defied medical odds and went on to not only live for many more years, but also become one of the most well-known modern scientists.

As CNN reported, Hawking relied on technology to help him move and speak, with the scientist using a speech synthesizer to allow him to communicate via a computerized voice. As CNN noted, Hawking worked hard to ensure that ALS did not prohibit him from accomplishing anything, writing on his website:

I try to lead as normal a life as possible, and not think about my condition, or regret the things it prevents me from doing, which are not that many.

Hawking has three children with his ex-wife, Jane, to whom he was married for over 20 years. He later married Elaine Mason, one of his nurses, though the couple divorced in 2005. Hawking's life story, particularly his marriage to Jane, was the subject of the 2014 film The Theory of Everything.

In their aforementioned statement, the Hawking children also added that their father's "courage and persistence with his brilliance and humour inspired people across the world. He once said: 'It would not be much of a universe if it wasn't home to the people you love.' We will miss him for ever."

According to The New York Times, in addition to leading a daring professional life, Hawking was known to take risks in his personal life. Indeed, when he was 65 years old, he participated in a zero gravity flight on a customized Boeing 727 that was supposed to simulate space travel. Hawking also said on his own website that he "still hopes to make it into space one day." When the Times asked him why he is willing to subject himself to such risks, Hawking replied in an email, "I also want to show that people need not be limited by physical handicaps as long as they are not disabled in spirit."

In 2013, Hawking wrote in his memoir, My Brief History, that he had initially been devastated by his ALS diagnosis, saying:

At the time, I thought my life was over and that I would never realise the potential I felt I had. Now, 50 years later, I can be quietly satisfied with my life.

Hawking managed to accomplish many extraordinary feats in his lifetime — and his influence will remain for many, many years to come.