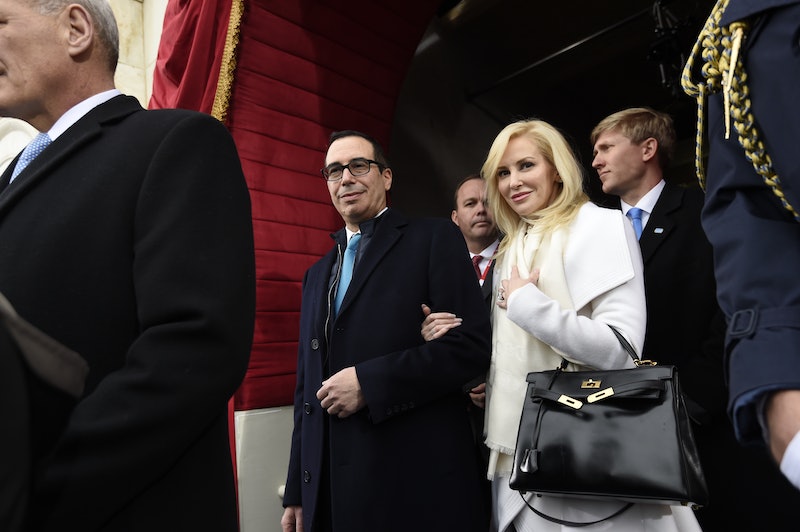 A brief trip to Kentucky earlier this month is quickly turning into a massive headache for Treasury Secretary Steve Mnuchin and his wife, Louise Linton. Less than a week after Linton used a photo from the trip to promote a few designer brands on Instagram, a government ethics watchdog group launched an investigation into Mnuchin and Linton's Kentucky trip.

The non-profit government ethics watchdog group Citizens for Responsibility and Ethics in Washington, known also as CREW, has filed a request under the Freedom of Information Act for "all records concerning authorization for and the cost of" Mnuchin's travel to Lexington, Kentucky via a government place on August 21. The group has also requestedrecords per taining to Mnuchin's overall use of government planes since he was appointed Treasury Secretary.

CREW claims the records it is requesting would shed light on why Mnuchin and Linton felt justified using a government plane rather than a commercial flight as is fairly common for domestic travel for their brief Kentucky trip. "At a time of expected deep cuts to the federal budget, the taxpayers have a significant interest in learning the extent to which Secretary Mnuchin has used government planes for travel in lieu of commercial planes, and the justification for that use," CREW said in a statement posted to its official website.

Mnuchin and Linton's trip to Kentucky was purportedly scheduled so Mnuchin could speak alongside Senate Majority Leader Mitch McConnell at a Louisville Chamber of Commerce-sponsored luncheon before touring Fort Knox. However, questions about the trip arose when Linton posted a photograph of herself and Mnuchin de-boarding a government plane to her Instagram along with a caption promoting the expensive designer brands she was wearing. Linton later mocked a woman who criticized her photo, alleging that she and her husband paid more in taxes toward "our day 'trip'" than the commenter did.

"The trip was originally planned for earlier in August but was postponed to accommodate the Congressional calendar," the Treasury reportedly said in a statement refuting claims that Mnuchin's trip to Kentucky was about nabbing a first-rate view of the solar eclipse.

Mnuchin reportedly watched the solar eclipse with Senate Majority Leader Mitch McConnell, Kentucky Gov. Matt Bevin, Rep. Steven Brett Guthrie, and Treasurer Jovita Carranza from the roof of the U.S. Bullion Depository at Fort Knox. The Treasury has since claimed the group viewed the eclipse from the lawn, and only for a few brief moments.

According to the Treasury, Mnuchin was less interested in the eclipse and more interested in "meeting with Mint personnel, reviewing the security procedures, and viewing the contents of the Depository."

According to The Washington Post, Mnuchin could have reimbursed the U.S. government for use of the government plane and, or for his wife's travel expenses. It is unclear when CREW's request for records will be fulfilled.