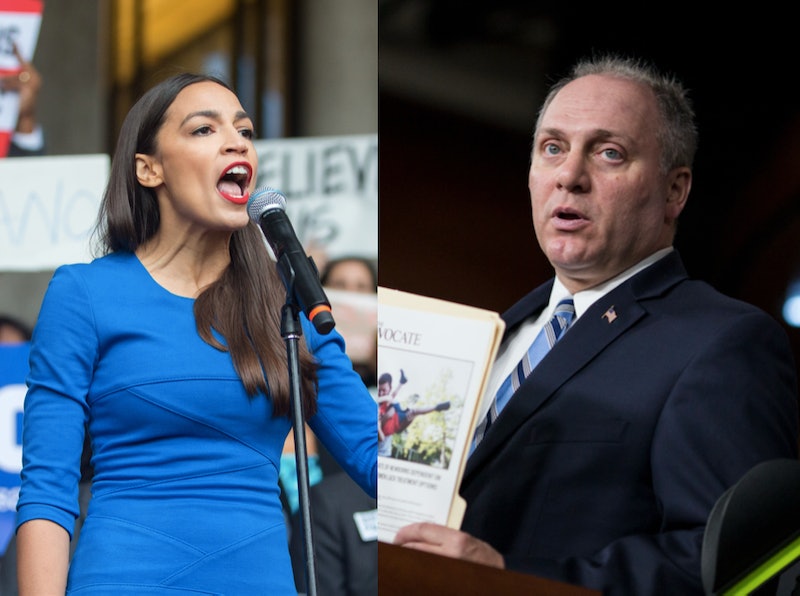 The Republican fascination with the popular freshman congresswoman continued. On Saturday night, a Twitter feud between Rep. Alexandria Ocasio-Cortez and Rep. Steve Scalise began when the New York Democrat called out the Minority Whip's misunderstanding of tax policy. And it all started with a clip of Ocasio-Cortez's appearance on 60 Minutes, which will air Sunday.

Ocasio-Cortez discussed a possible tax plan to finance the Green New Deal, a plan to embrace renewable energy and slow the effects of climate change. To pay for the plan, Ocasio-Cortez floated the idea of tax rates as high as 70 percent on the ultra-rich. Scalise tweeted a write-up of the interview clip from conservative news site HotAir.com, and added his own commentary: "Republicans: Let Americans keep more of their own hard-earned money Democrats: Take away 70% of your income and give it to leftist fantasy programs."

Ocasio-Cortez quickly called out Scalise's analysis, saying the GOP's focus is on "corporate CEOS" not "actual working people." "You're the GOP Minority Whip. How do you not know how marginal tax rates work?" Ocasio-Cortez tweeted. "Oh that's right, almost forgot: GOP works for the corporate CEOs showering themselves in multi-million bonuses; not the actual working people whose wages + healthcare they're ripping off for profit."

When a couple of people tweeted at Scalise referencing the shooting at the congressional baseball team practice in June 2017 that left Scalise in critical condition, Scalise tweeted at Ocasio-Cortez one last time. "Hi @AOC. Happy to continue this debate on the Floor of the People’s House, but it’s clearly not productive to engage here with some of your radical followers. #StayClassy," Scalise tweeted on Saturday.

For a short time on Saturday, the phrase "Radical followers" trended on Twitter, with many pointing out the hypocrisy of Scalise's tweet. For example, comedian John Fugelsang wrote, "Since Steve Scalise literally described himself as 'David Duke without the baggage' and is a hero to bigots, homophobes & men who opposed the Violence Against Women Act, I’m guessing he also wants to be judged by the words of his own special 'radical followers.'"

Many noted that it's curious Scalise would criticize Ocasio-Cortez for having "radical" followers when he gave a speech to a white supremacist group in 2002. Scalise later called the speech "a mistake I regret."

Scalise wasn't the only major Republican to criticize Ocasio-Cortez's plan. Ed Rollins, who runs a pro-Trump Super PAC, called Ocasio-Cortez "the little girl who wants to do pre-Reagan economics" when discussing the 60 Minutes clip. Rollins added that "the Democratic women are basically going to be damaged" by her.

While Ocasio-Cortez's proposed tax plan seems to have rattled Republicans, at least one high-profile economist has called it "not at all outlandish." And that economist is Nobel Prize winner Paul Krugman. "She's actually saying what top public finance economists have been saying for some time. Not at all outlandish," Krugman tweeted on Saturday as a part of a longer thread discussing Ocasio-Cortez's interview clip.