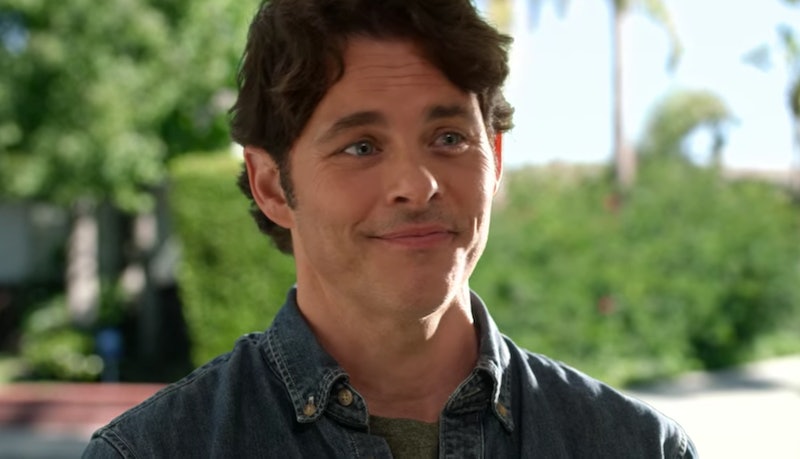 Spoilers ahead for Dead To Me Season 2. Steve may be dead on Dead to Me, but surprise! He has a twin brother named Ben (also played by James Marsden) who shows up in Season 2, and having identical faces is about the only thing they have in common.

Whereas Steve was angry, manipulative, and downright cruel to Judy and pretty much everyone around him, Ben is a delight. He's friends with Judy, nice to Jen, isn't laundering money (as far as we can tell), and is an all-around sweet, goofy guy. He does have some issues stemming from being raised by a mom who seemed to favor Steve over him, which makes searching for his brother that much more complicated. But he puts his personal feelings aside in order to be there for his family as the police investigate his brother's sudden disappearance.

Ben doesn't know that Steve is already dead and that Jen killed him, but he does know that he likes Jen. The two form a friendship that eventually turns romantic...before Jen eventually comes to her senses and breaks it off. Dating the twin brother of the guy you murdered is almost as twisted as befriending the widow of the guy you hit with your car.

That's what makes the whole thing so ironic: Jen's relationship with Ben closely mirrors the one she had with Judy in Season 1, except the roles are now reversed. After killing Jen's husband Ted in a hit-and-run accident, Judy inserted herself into Jen's life — in part to make sure she was doing OK, in part to keep Jen from finding Ted's true killer, and in part because she was desperate for a loving family. When Jen learned the truth about Judy, she was furious and unforgiving. But Season 2 gave Jen a chance to understand that life isn't so black and white. Her own bad behavior with Ben led to her to forgive Judy for everything, but it remains to be seen if Steve would forgive Jen if he found out that she killed his brother.

Further complicating the matter, Ben now has a secret of his own. At the end of Season 2, he was drunk driving and accidentally hit the car that Jen and Judy were in. Assumedly not wanting to get a DUI, he fled the scene — something he'll likely end up hiding from Jen and Judy if the show returns for Season 3. As Michael Scott would say, oh how the turntables.