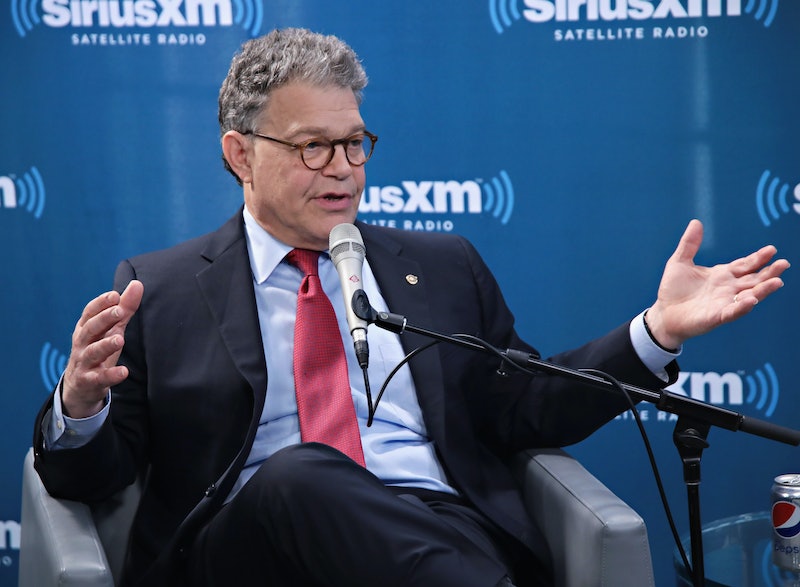 I am considering making my pinned tweet, “No, I don’t like Bill Clinton either.” That’s because every time someone on the right is accused of sexual assault — whether it is Donald Trump, who has been accused of sexual abuse by at least 16 women (allegations he denies), or Roy Moore, who was allegedly banned from a mall for soliciting underage girls (he denies ever sexually harassing women) — somebody on the other side will shout, “What about Bill Clinton!” On Thursday, of course, Bill Clinton did not need to be invoked: A horrific photo of Democratic Sen. Al Franken groping the breasts of an unconscious woman during a USO tour was published on local site KABC, along with accusations that Franken had tried to kiss the same women without her consent.

As for Clinton, the former president was accused in 1999 of sexually assaulting Juanita Broaddrick during his campaign for governor of Arkansas in 1978. "I told him ‘Please don’t' ... He was such a different person at that moment. He was just a vicious, awful person," Broaddrick claimed in an interview with NBC's Dateline in 1999. (Clinton has adamantly denied the allegation). Asked why she didn't go public sooner, Broaddrick told NBC: "I didn’t think anyone would believe me in the world."

There are people who think the fact that a Democrat did something bad, like so many Republicans have, negates the damage from the other side of the political aisle.

These people are very mistaken.

To make the argument that this negates the damage of the accusations made against, for example, Moore, suggests that claims of sexual harassment should be treated as some sort of competition. It suggests that the situation is an interesting political game — if you can point out that the other side is also bad, they win.

That's appalling. Two plus two does not equal zero. They don’t negate each other. They just equal a world where many, many women are forced to experience some very unpleasant treatment from some very powerful men.

Nobody who is invested in ending sexual harassment sees this as a game. I assure you, no woman who was groped or assaulted has ever said, “Well, that’s fine because he’s a Democrat.”

Anybody legitimately concerned about sexual harassment is not looking for some sort of moral victory where Democrats triumph by having slightly fewer gross men in their party than Republicans do. We are looking for a sea change in the way people of every party treat women.

Namely, if you cannot stop preying on children, if you cannot stop groping unconscious women’s breasts, you have no business being in government representing women. You want these guys voting on women’s issues? I don’t, because their actions seem to indicate they regard women more as sex dolls that as fully human individuals.

The only factor we should be considering politically is how party representatives respond when accusations arise. We should look to whether people in those parties align themselves with the aggressors or with the victims. Al Franken has been called on by liberal outlets like Vice and Slate to resign immediately. Democratic Sen. Claire McCaskill is calling for an ethics investigation into his behavior. Even Franken himself has said he will gladly cooperate with an ethics investigation, and understands what he did was wrong.

Meanwhile, we’ve seen Alabama officials cite Mary and Joseph to defend Roy Moore’s behavior as somehow godly. Press Secretary Sarah Huckabee Sanders has declared that each and every one of the women who have accused Donald Trump of assault is a liar. Trump has also refused to pass judgement on Roy Moore, and has said that the women who accused him of assault were too ugly for him to prey on.

Some of these responses are going to move the world forward. Some are going to keep it in place. Keeping it in place is a system that works just fine for the men doing the sexual assault, and not so well for the people getting groped.

We can’t change the actions of ignoble men. But we can respond to them. We can listen to women. We can move forward. We can show men that this is not tolerable behavior, and we can show women it’s not behavior they have to accept. And in doing so we can make the world a slightly better place.

And if you’re really worried about male politicians harassing women? If you’re simply not sure which male politicians can be trusted right now? One simple solution would be to vote for women.

More like this
A Political Thriller Inspired By The Munich Massacre Is Coming Soon
By Darshita Goyal
Naomi Osaka & Emma Raducanu’s Experiences Have Inspired A New Amazon Show
By El Hunt
We’ve All Had Bad Sex. Nona Willis Aronowitz Is Talking About It.
By Sophia Benoit
Why Eurovision 2023's Host City Won’t Be Revealed For A While Yet
By Sam Ramsden and Rachel Mantock
Get Even More From Bustle — Sign Up For The Newsletter