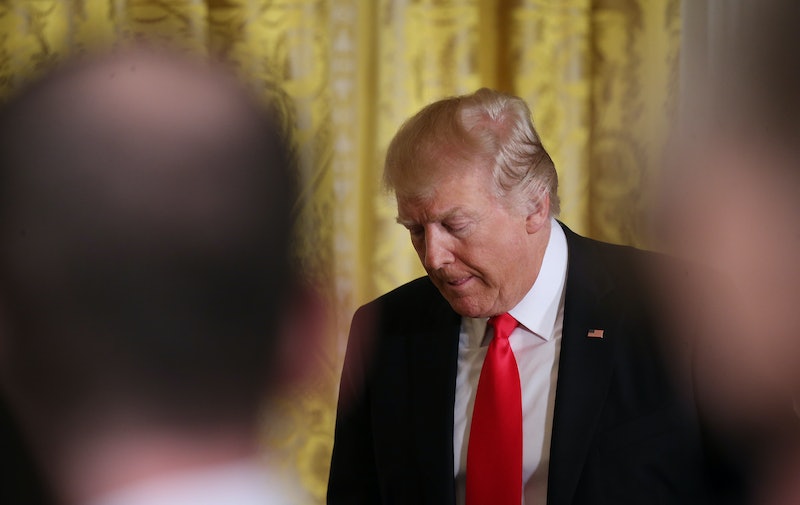 People have been drawing conclusions about Trump's mental health since the early days of the campaign, but the guessing games have only increased since he assumed the presidency. Howard Stern suggested that the presidency is going to be "detrimental to [Trump's] mental health." Politicians such as Nancy Pelosi and Al Franken have also passive aggressively suggested that Trump's mental health needs to be checked, without any real evidence that he is suffering from a mental illness.

Additionally, thousands of tweets about Trump's alleged mental illness appear online every day, with comments like "I feel so desperately sorry for Donald Trump, because he obviously suffers terribly with mental illness, but he is not safe to be POTUS," and "Donald Trump is a threat to mankind! He threatens the existence of the human race with his mental illness! "

On the surface, Trump may seem to have hallmarks of mental illness, but it's crucial to recognize that those signs aren't really so much signs as stereotypes. Online commentators who theorize about Trump's potential Narcissistic Personality Disorder do nothing but perpetuate outdated idea about what mental illness looks like. Social scripts about mental illness can be wildly inaccurate due to stigmatization and misrepresentation in the media.

Unless you're a trained mental health professional or have a personal connection to someone with mental illness, you probably don't know what the symptoms of a mental disorder really look like. Though it's almost reassuring to imagine that there is some kind of psychopathology motivating Trump's actions, it's much more likely that he's mentally health and just a terrible person.

All the hot takes from mental health professionals about possible diagnoses also misrepresent the whole point of therapy. No psychiatrist or psychologist worth their salt would diagnose a patient without having one or more one-on-one sessions, and giving people the false idea that that's possible is irresponsible. Therapy is hard, time-consuming work that's a collaboration between therapist and patient — articles like "Is Donald Trump Actually a Narcissist? Therapists Weigh In!" make diagnosis and treatment seem like a routine and formulaic process that can be accomplished without seeking professional help. This speculation about Trump's health generally reduces the complexities of the human brain and psyche to a 1,000 word article and trivializes the importance of doing the emotional labor that therapy requires.

The only silver lining to this national conversation about mental health is that it may get a psychiatrist into the White House for the first time. Representative Ted Lieu, a Democrat from California, is planning to introduce a bill that would require an in-house psychiatrist at the president's disposal, which is a great way to show the public that therapy is nothing to be afraid of. Though Lieu used some harmful neurotypical rhetoric in defending his stance on the bill, the end result would still be beneficial for the American people to see that even the President can seek mental healthcare without judgement. If American society really wants to prioritize mental health equally with physical health, then a therapist in the White House is the first step toward making it happen.

Psychologists and psychiatrists study for years to diagnose and treat patients, and their work doesn't get any easier when people see an irrational, angry man in the media and automatically assume he has a mental illness. While you're obviously allowed to express concern about the president's mental health as a citizen who has a vested interest in his capacity to govern, speculating about mental illness is a step too far. There are plenty of concerning things to focus on regarding Trump's administration that are based in actual fact instead of pure presumption.