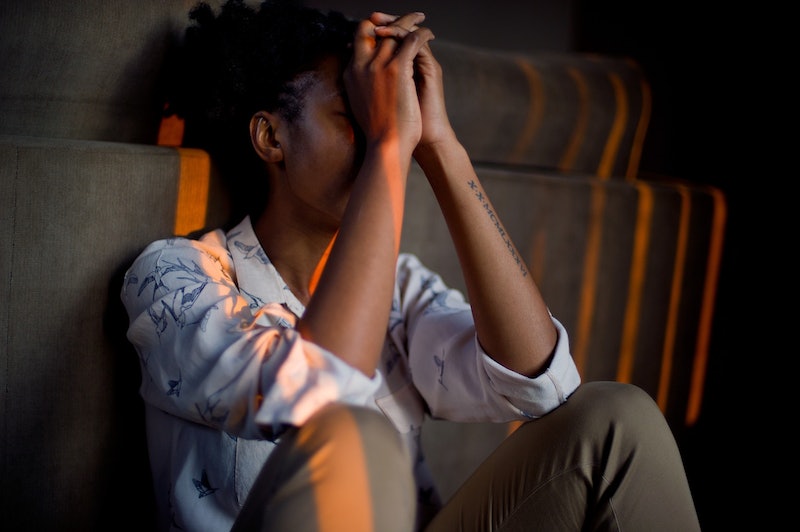 Imagine for a moment you are walking down the street and sprain your ankle. You stop, curse a bunch, and ask your friends for help. Now imagine one of them says, “Hey, can you just… not be in pain anymore? We’re late for brunch and to be honest, your ankle is bumming the rest of us out.” You’d be pissed! You’d say: “Shut up, Greg! Get me a freakin’ ice pack RIGHT NOW, nobody wanted to invite you anyway!” which may or may not be true but like, screw Greg.

As absurd as this sounds, we do it all the time to people struggling with anxiety. We’ve all been Greg. We tell them to calm down like it’s a helpful reminder, as if they had simply forgotten that not experiencing an elevated heart rate, nausea, and the crushing certainty that everything will end poorly was an option, as if not having a sprained ankle was an option.

And it’s not a huge stretch to believe the person you’re talking to may be living with anxiety. According to the Anxiety and Depression Association of America, anxiety disorders are the most common mental illness in the U.S., affecting up to 18 percent of the adult population. These include generalized anxiety disorder (GAD), post-traumatic stress disorder (PTSD), panic disorder, and social anxiety, among others. Telling someone who lives with one of these conditions to “calm down,” is more than just unhelpful, it can actually increase their feelings of anxiety.

“For some, hearing the words 'calm down' can actually trigger anxiety symptoms,” Clarissa Silva, a Behavioral Scientist and author of the relationship blog “YOU’RE JUST A DUMBASS” told Bustle. “Simply telling someone to calm down doesn’t reduce their symptoms, they will need tangible solutions to reduce their symptoms.”

Instead of trying to shut down a person’s emotions, Silva suggests opening up a dialogue by saying something like: “Can you tell me what upset you so much and let’s talk about it.”

While conversations around mental health have opened up significantly in recent years, it is still difficult to discuss negative emotions in a society that overwhelmingly emphasizes displaying the best version of yourself to the public, and where vulnerability is often seen as a weakness. So when someone expresses their anxiety, those around them often don’t know how to respond appropriately, because they are taken aback and/or limited by their own discomfort. Silva suggests social media also has a role to play in how we learn to respond to negative emotions by creating what she calls “vanity validation”.

“We’re treating people like we do our social media streams. The shiniest object is what we stop at, then move onto the next shiny object. For many, they are only broadcasting and sharing the positive aspects of their lives on social media — the highlight reels. If we are mainly broadcasting the 'look at me,' are we able to deal with the negative aspects of life, rejection, detachment, and non-commitment? Are we creating a society that enables people becoming one-dimensional devices? Can we simply scroll or swipe away people’s negative experiences?”

Dealing with negative emotions is uncomfortable, of course it is. It would be great for everyone to be happy all the time! But negative emotions need to be dealt with out in the open, not suppressed and hidden away. That’s literally the entire plot of Inside Out (and a number of academic studies). We need to stop telling people to calm down not only because it’s a sh*tty, unhelpful, Greg thing to say, but because we need to move towards a culture where people can discuss their emotions, both positive and negative, openly and honestly.

So let's offer our friends emotional ice packs when they need them.

Don’t tell people to calm down. Don’t be a Greg.